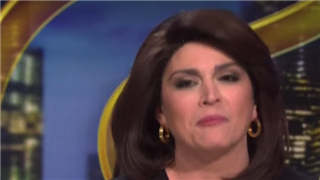 Cecily Strong returned to play the Fox News personality, who hosts Justice with Jeanine, as she defended Rittenhouse, acquitted of all charges in the killing of two men and injuring another in the Kenosha protests last year.

“That lovable scamp was put through a nightmare of a trial just for doing the bravest thing any American can do — protecting a used car lot in someone else’s town,” Pirro said.

Later, James Austin Johnson returned as Donald Trump, as he went on one of his characteristic attacks on the infrastructure bill, Joe Biden and Chris Christie, and then talked of his own plans for a “reboot.” Johnson won praise for his portrayal of Trump earlier this month, and the show once again played up the real figure’s tendency to divert into streams of consciousness.

Pirro’s first guest was Judge Bruce Schroeder (Mikey Day), who started by telling her of the trial, “It was all standard procedure. That’s why I ordered that the prosecution not use the word ‘victims,’ they were rioters, and hey were not shot, they were ge-doinked. That did not give my client and unfair advantage in any way.”

“You said, ‘my client.’ Do you mean the defendant?” Pirro interjected.

“Oooh, yeah, sure. I keep doing that,” Schroeder responded, as the show skewered the judge’s controversial moves that were seen as favorable to the defense.

Pirro also made note of McCarthy’s eight hour, 32 minute floor speech on Thursday evening and early Friday, which had the effect of merely delaying House passage of the $1.9 trillion Build Back Better Act. She went to a clip of “hour six” of McCarthy’s “rhetorical masterpiece” of a speech. Yet the clip was of  McCarthy (Alex Moffat) trying to flip over a plastic water bottle.

Pirro’s reaction? “And that brave man stopped the Build Back Better bill from being passed … until the next day when it passed in two minutes.”

The show then mocked Pirro’s fawning embrace of Trump.

“I know you have a lot of thoughts on the infrastructure bill, so I am just going to let you riff as I sit here and get absolutely rock hard!” Pirro said.

“Glad you brought up that terrible bill because the truth is nobody did more infrastructure than me. And people are saying, and you know what? ‘People,’ of course, are people who are me.”

Then, Trump got into a bit of word salad as he brought up “the wall.”

“They are saying I will build it back even a little bit better because I did the wall, big beautiful wall. It is not just wall because when you put wall down through a grassy field, okay frankly that’s road, and if you take wall and laid it across the river, then gee, we are greatly doing bridge.”

“Whoa, I am edging…” Pirro responded.

Then the screen split, with Trump accompanied by a word graphic so viewers could follow along as he peppered his points with non sequiturs.

“Joe Biden tried to reboot Obama and it flopped. It flopped, just like the female Ghostbusters. Speaking of girls, why did they reboot Gossip Girl?” And he went on.

Trump  then went into free association, as he opined on Chris Christie, Bill Maher and Dua Lipa. “You know what, her husband, who is not very attractive, it’s terrible what they are doing with Dua Lipa’s husband, not being attractive, we have to do something about it.” On the other side of the split screen, to help the viewer, was the graphic of a word search game.

So you’re vaccinated. How much risk do you really face now?