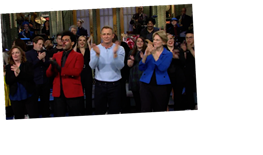 While his new movie No Time To Die was delayed at the last minute because of the coronavirus outbreak, Daniel Craig proceeded with his hosting duties on NBC’s Saturday Night Live where he got to spoof his last James Bond film.

The March 7 episode, featuring musical guest musical guest The Weeknd and appearances by Elizabeth Warren and SNL alums Darrell Hammond as Chris Mathews and Rachel Dratch as Debbie Downer, drew a 4.1 Live+Same Day household rating in the 44 local metered markets and a 1.6 adults 18-49 rating in the 25 markets with local people meters. That was up a fraction in households and down a notch in adults 18-49 from last week’s original (4.0, 1.7) hosted by John Mulaney with musical guest David Byrne.

The demo metered-market result tied the delivery of the Nov. 16 episode hosted by another Brit, Harry Styles, for the lowest mark since Nielsen changed its methodology early into the current season.

Versus primetime programming on the Big 4 networks last night, SNL is the No. 1 show of the night in both metered-market households and in 18-49 in the local people meters.

Besides the “The Ingraham Angle Coronavirus Cold Open” featuring Warren, which has already crossed the 2 million views mark, the opening segment of Weekend Update, and “The Sands of Modesto” coronavirus-themed soap opera spoof, the most watched clips from last night as of midday Sunday were On the Couch” R&B music video, starring The Weeknd, Kenan Thompson and Chris Redd and featuring Craig, as well as Craig’s opening monologue featuring the No Time to Die parody.