Home » TV and Movies » ‘Should the Wind Drop’ Review: An Empty Airport Plays Backdrop to a Literate Meditation on Borders 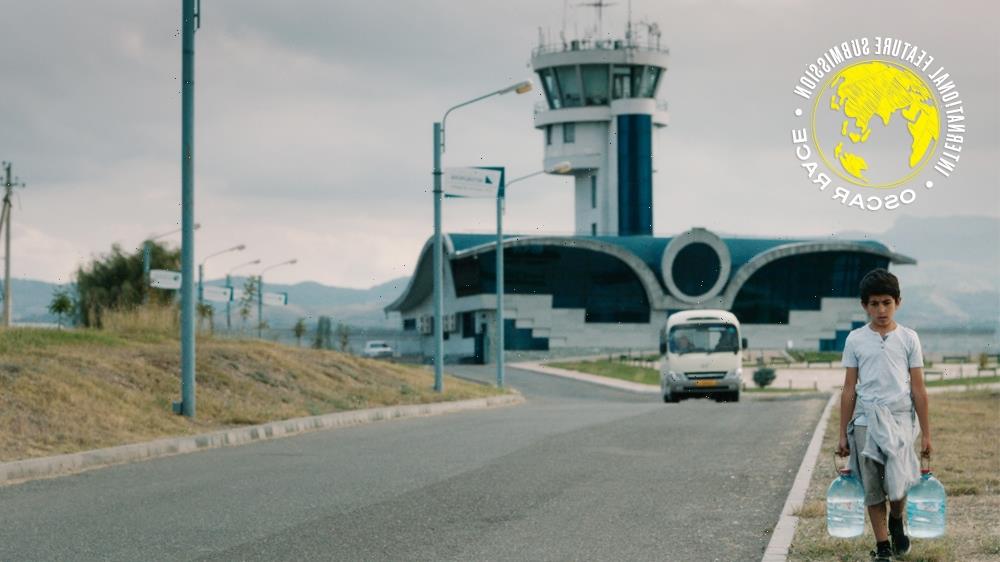 ‘Should the Wind Drop’ Review: An Empty Airport Plays Backdrop to a Literate Meditation on Borders

A man arrives at an airport. Situated in a remote place, surrounded by vast desolate landscapes, this modern building feels like a mirage, not so much out of place as out of time. The airport, he knows, is empty though not abandoned. There may be no planes but there are employees ambling about, traffic controllers busying themselves up in the tower and cleaning ladies complaining about their Sisyphean tasks. The man is expected, after all. It is he who will assess whether this “cathedral of an airport,” as it’s described to him, with its showy architectural flourishes that stand in stark contrast to its dusty surroundings, will finally be vetted and approved for operation.

The premise for Nora Martirosyan’s “Should the Wind Drop” reads like a short story. There’s a minimalism to its plot and characters — not to mention its setting — that makes it feel like a distilled proposition, one meant to capture in miniature the state of the Republic of Artsakh, a breakaway state in the South Caucasus. In case you’re not familiar with Republic of Artsakh, (also known as the Nagorno-Karabakh Republic NKR), the violence that it suffered during the ’90s or the current cease-fire that has kept the Stepanakert Airport a shell of its own self since it was first shuttered during the First Nagorno-Karabakh War in 1990, “Should the Wind Drop” opens with a breezy expository-heavy conversation between Alain Delange (Grégoire Colin) and his local driver.

A French man tasked with investigating the airport and making sure it’s up to international standards, Delange makes for a perfect audience surrogate. He’s as clueless as we are about the Republic of Artsakh and the early-’90s violence that led to the ceasefire. (“Of course you didn’t know,” his driver ribs him. “You were looking at Yugoslavia back then.”) Thankfully, Martirosyan — in a script she co-wrote with Olivier Torres, Guillaume André and novelist Emmanuelle Pagano — never gets bogged down in details. Hazily sketched, the main issue at hand for Delange is one of a contested border, which may or may not allow the airport enough air space for safe passage for planes who may need to, in case of emergency, circle back around.

To Delange this may well be a regular assignment. But to his hosts, the chance to get the airport back up and running is a matter of national urgency. After all, an airport is a border in itself, one which would have to be acknowledged by the international community if suddenly planes could fly in and out of Stepanakert, further connecting the region with the outside world. As it is, the region is only recognized by bordering Armenia (the country, in fact, who’s submitted Martinosyan’s film to the Academy as their shot at an international feature Oscar). There’s a neediness to those around Delange but he seems mostly unmoved. Colin plays Delange as an aloof numbers guy, focused on coordinates and maps, not quite eager to delve into geopolitical diplomacy.

Against the absurdity of watching rigid bureaucracy run up against a reality that’s as fallible as the humans who inhabit it, first-time filmmaker Martirosyan often leaves Delange and turns her camera toward Edgar (a wearied, wide-eyed Hayk Bakhryan). The small child, who runs around with two plastic jugs in tow, selling cups of water to anyone he meets, is as curious as he is indifferent to the world Delange represents.

Edgar sees no trouble in cutting across the airport fields to save himself some travel time, nor does he ever pay attention to the ramshackle gates that are erected precisely to keep the area clear of interlopers (an obvious requirement for a functional airport). Initially, Edgar is proof positive for Delange that the Stepanakert Airport is sure to fall short, more a lofty promise than a working piece of infrastructure. It’s almost comic how obvious it is that his report is going to be negative — no matter how much schmoozing and cajoling he’s subject to. Except, perhaps predictably, Delange begins to thaw and see this isolated country and the folks around it for who they are and who they wish to become, for the country they know the airport will make of them.

As a portrait of the Republic of Artsakh, “Should the Wind Drop” is remarkable, sparse but probing with just enough visual poetry to cut through what may, on the page, sound like a simple and utterly implausible premise. With the aid of DP Simon Roca, who turns this arid landscape into a character unto itself; composer Pierre Yves Cruaud’s piercingly jagged score; and co-editor (and recent Oscar nominee) Yorgos Lamprinos (“The Father”), Martirosyan has created a languidly paced Kafkaesque fable of sorts. Thus, when the film jolts into its third act climax forcing Delange to grapple with the reality of a contested border, the Armenian filmmaker artfully captures the near-farce of this scenario where men with guns and bombs end up rendering Delange’s final report all but inconsequential, its final moments punctuating the film’s many meditations with the punch of a great kicker.

The literariness of “Should the Wind Drop” is what makes it so entrancing, even as the film can often feel intentionally obfuscating, both too slight and too vast. Its themes, its setting and its characters coil around one another tightly, echoing each other with the deft precision of a writer who doesn’t waste a single word, punctuation mark, or vivid image. They all serve the same purpose; to stress the alienating existence of a country with borders but no international legitimacy; the melancholy of an airport with no planes; the crushing cruelty of feeling displaced in a place you call home.