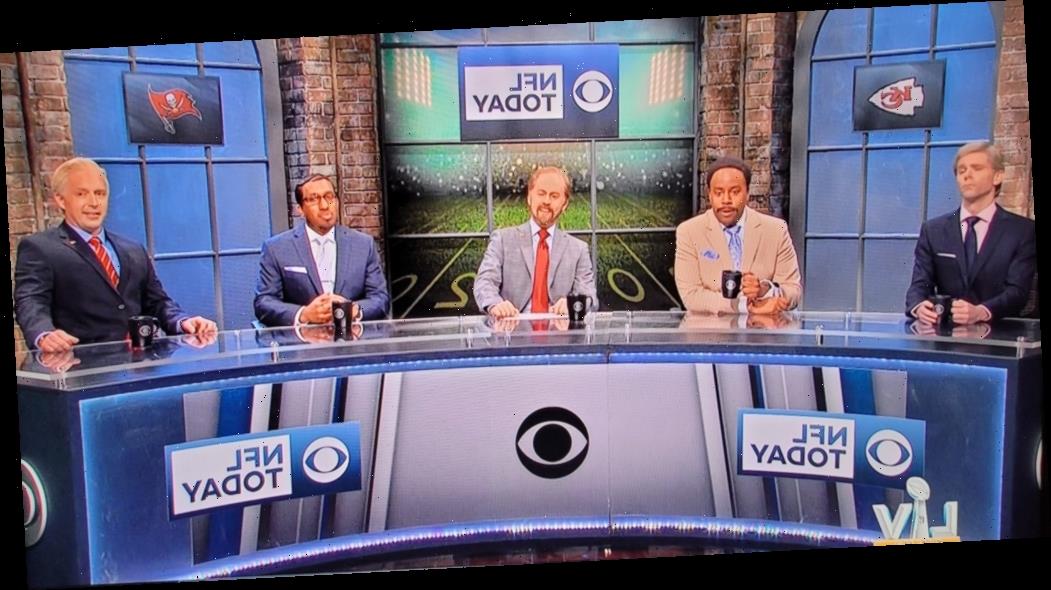 The most honest and fumbled play of tomorrow’s Super Bowl LV on CBS might have just happened on NBC’s Saturday Night Live, maybe.

“Hello and welcome to the Super Bowl, four hours of television for 11 minutes of action,” declared SNL’s Kenan Thompson as sports broadcaster “James, no, not that one, Brown” in the opening of tonight’s show. “As everyone at home knows, this year has been anything but normal,” SNL’s longest-serving cast member added with co-stars Chris Redd, Mikey Day and Beck Bennett surrounding him as CBS’ NFL Today crew.

However, from there, as has occurred so many times this season, the sharp cold open went soft with a roundtable of wide ranging one-liners in search of a skit and a sense of humor – and it’s not like the hypocritical and hypersensitive NFL or the hoopla of the Super Bowl itself is that hard to mock.

“The pandemic, racial and political divisions, Armie Hammer, but today we come together in a spirit of unity to watch football and murder millions of chickens for their delicious wings,” Thompson’s coffee cup-welding Brown proclaimed. He then sideswiped the NFL with a crack about the league getting through the season with “only 700 cases” of Covid-19.

“You know who’s feeling the Covid restrictions more than anyone this week, Tampa Bay’s famous prostitutes,” added Redd’s bespectacled s Nate Burleson in a wet noodle of a whack on the Sunshine State host city of this year’s socially distanced big game. Also, the hometown of contenders the Buccaneers and their new QB Tom Brady, Tampa Bay’s nearly 70,000 capacity stadium will have just around 25,000 masked fans in the stands, of which 7,500 will be vaccinated health care workers.

Back to SNL‘s chilly opener: There was a “historically delicious” attempt to ridicule the efforts of many advertisers to lean progressive and link themselves to the civil rights movement and BLM. On the flip “conservative slate” side, promising “no child sex trafficking,” there was a preview of a fictional QAnon ad spoofing Papa Johns pizza & slagging “Hillary’s Pizza.”

The spiraling opening skit also weighed in on Viacom’s cross promotion with Nickelodeon and others. Not that NBC’s own corporate cousins like Bravo didn’t get to share in the shade too, with an Andy Cohen-hosted simulcast entitled “Old Hag, Young Slut.”

The mock title is a tribute of sorts to 43-year old Brady and rival Kansas City Chiefs QB Patrick Mahomes, age 25, if you aren’t a football fan. If you weren’t a football fan, the dueling and banal coaches portion of the open with Aidy Bryant would have left you cold too.

Still, in some sense, tonight was a break from more of the same old same old on SNL, sort of.

The body politic formed almost all of the basis of SNL‘s return from hiatus last week and almost all the cold openings of the past few years, with Donald Trump as the toxic core.

Absent tonight and laying low(ish) since facing electoral and constitutional reality and petulantly leaving the White House on January 20, the former Celebrity Apprentice host is set to be in the spotlight in his second impeachment trial starting Tuesday.

In the second SNL of 46th POTUS Joe Biden’s term and the 11th episode of the current 46th season, tonight’s show is hosted by Dan Levy with musical guest Phoebe Bridgers. It’s a debut with the latest iteration of the Not Ready For Primetime Players for both the multiple Grammy nominee and the Schitt’s Creek co-creator and star. Tonight’s SNL comes at the tail end of a whirlwind week for Levy. Already having made Emmy history last year with big wins for its final season, Schitt’s Creek snagged multiple Golden Globes and SAG Awards nominations this week.

All of which makes it all the sweeter that the offspring of one SCTV alum (Eugene Levy, who is also on Schitt’s Creek and made a cameo in his son’s monologue) and the co-star of another (Catherine O’Hara) is fronting the long-running SNL that was created and still run by a fellow Canadian (Lorne Michaels). SNL has, of course, been home over the decades to some of the Great White North’s best and brightest (too many on both sides of the cameras to name here.)

Why Victoria Larson Never Stood A Chance On The Bachelor