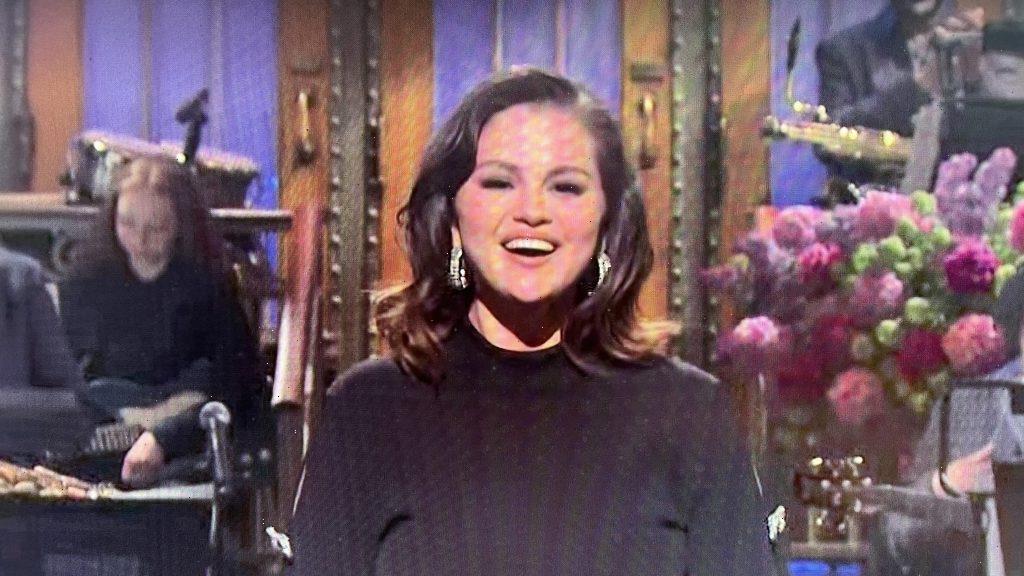 Selena Gomez tonight made her debut as host of Saturday Night Live, speaking in her opening monologue about the Hulu series Only Murders in the Building, which has her starring alongside Steve Martin and Martin Short, and more.

Gomez opened her monologue by noting that growing up, she’d watch the late-night show with her mother every week. “This is a big moment for me,” she said. “I actually started acting when I was seven, and I’ve been lucky enough to work with some Hollywood icons, [like] Steve Martin, Martin Short and, of course, Barney.”

We then cut to a shot of the actress with the purple dinosaur from one of her appearances on the children’s show Barney & Friends back in the early 2000s. “That was the first show I was on, and now I’m on a show called Only Murders in the Building,” noted Gomez. “I was so honored to work with Steve Martin and Martin Short, especially after I googled them to find out who they were.”

Gomez recalled that when she told a friend she’d been cast in a show called Only Murders, the friend said, “Mm, that sounds sexy. Any hot co-stars?’”

Even if Only Murders isn’t all that sexy, Gomez said it’s been “cool” working on the series with two SNL legends. “When I found out I was hosting, I immediately asked for their advice,” she shared. “Steve said, ‘Trust no one,’ and Marty said, ‘I think Steve Martin has been using my credit card.’”

Gomez said she also asked one of her “oldest friends”, Miley Cyrus, for hosting advice, then launching into an impression of Cyrus telling her, “Just be yourself and have fun.”

The host went on to explain that she’s glad to be on the show because she’s single, and she’s heard that it’s “a great place” to find love. “Emma Stone met her husband here. [There’s] Scarlett Johansson and Colin Jost, and Pete [Davidson] and…Machine Gun Kelly,” deadpanned Gomez. “Since I don’t want to get on the dating apps, I’m putting out into the universe that I’m manifesting love. And I would like to say that I’m looking for my soulmate, but at this point I will take anyone.”

“Uh, I’ll do it,” said cast member Kyle Mooney, as he stepped onto the stage—to which Gomez asked, “What?”

Gomez then shot him down, and when Mooney noted she said she’d take “anyone,” the host admitted she was “sort of joking,” also calling out the fact that Mooney is married.

Gomez’s next suitor was “the new cast member, Jeff”—who pointed out that his name is James, as in James Austin Johnson. And while the host was wrong about his name, she made it clear that she knew that he, too, is married.

Then, there was Punkie Johnson, who pitched herself as a third potential love interest.

“Honestly, it’s kind of a vibe,” said Gomez, “but let’s see how the afterparty goes.”

Before moving forward with the show, Gomez took a moment to express her gratitude for the opportunity to host. “I’ll admit, I am a little nervous, but I just think back to those words of wisdom that one of my co-stars would tell me before every show,” she said in closing. “I love you, you love me, we’re a happy family.”

Gomez then lead members of the audience in a sing-a-long of Barney & Friends‘ “I Love You” to close out the sketch. She’s joined for tonight’s show by musical guest Post Malone. Deadline will update this story with video when it comes in.