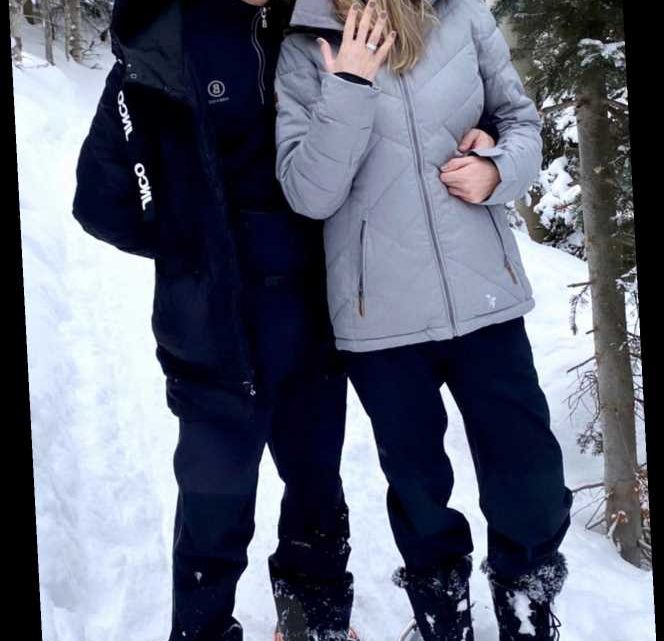 Ashley Jacobs is an engaged woman.

Appel, owner of Related Garments clothing apparel and creative agency Nnovate, popped the question while the two were out on a snowmobile ride in Park City, Utah.

"After a year and half of dating, we can both agree that this adventure we're on together is just getting started," Jacobs tells PEOPLE. "We're a great team and we can't wait for what's ahead! Buckle up!" Jacobs, 35, and Appel, 40, met in 2019 at a summer rooftop party in Jacobs' hometown of Santa Barbara, California.

"I was taking a picture of the ocean sunset when Mike kindly interrupted and asked, 'Would you like me to get a picture with you in it?'" Jacobs recalls. "We sparked up a conversation after that. Mike is from Los Angeles and he asked, 'Do you ever come to L.A.?' I thought to myself, 'No,' but responded with, 'Not that often.' I then reminded myself I previously dated someone who lived in South Carolina, so L.A. is nothing in terms of distance."

"Mike invited me to Los Angeles the following week," she adds. "The rest is history!" The couple made their relationship Instagram official a few months later.

Jacobs was last linked to Thomas Ravenel, 58, whom she dated for more than a year before they split in 2018. While they were together, Jacobs joined the cast of Southern Charm as Ravenel's girlfriend and stirred up major drama, openly feuding with Kathryn Dennis, Ravenel's ex and the mother of his two kids.

"It was dark, and it was really lonely and, yeah, I was really lonely," Jacobs previously told Entertainment Tonight of her time on the show. "I lost a lot of weight. I wasn't taking care of myself mentally … I suffered from depression, situational depression."

"I didn't have the support of my family," she continued. "They were very disappointed in my decision, and so the only person I had was Thomas. He was my support system, we were really in the trenches together … I stayed by his side because I needed his support, because I wasn't getting support from anyone else, not even my family."

In 2018, Ravenel was arrested and charged with assault and battery, four months after his children's former nanny accused him of rape. He pled guilty and received a 30-day sentence that was suspended to a $500 fine and probation in lieu of jail time.

In October 2019, Ravenel and the nanny reached a $125,000 settlement, with Ravenel agreeing to pay $45,000 in her personal legal fees and an additional $80,000 to a local nonprofit aiding adult survivors of sexual assault.

"I mean, if you're dating someone and there's allegations [against them], you can imagine just that in itself [takes a toll]," Jacobs told ET. "It concerned everyone that was close to me."

"I don't ever wanna go back to that place," she said. "Like I said, it was the worst year of my life. I don't think I could make it any better. I tried. It didn't work."