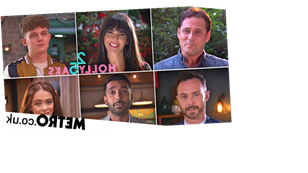 Hollyoaks is currently celebrating its 25th anniversary in an explosive fashion, and tonight’s episode (October 21) — aka the actual birthday episode — will feature every mainstay in order to mark the occasion.

Yazz Maalik (Haeisha Mistry) was devastated when Tom Cunningham (Ellis Hollins) broke up with her, but he claimed he did so out of kindness.

With Yazz wanting to travel the world, Tom fears he’ll hold her back, as he wants to stay put in the eponymous village.

However, Yazz is refusing to allow him to dump her, and — in an effort to prove just how much he’s loved — she’s decided to record an emotional love letter for him, featuring all of the village residents.

The love-letter will include every cast member and current character, and will air during tonight’s episode.

In order to create the iconic moment, the Channel 4 soap’s cast had to be filmed separately. However, the video message mirrors the birthday celebrations that many people have experienced this year.

While the video letter is addressed to Tom, the message will no doubt resonate with the audience.

That’s not the only thing on offer in tonight’s instalment either, as — given that its the actual birthday episode — there’s plenty in store!

You won’t want to miss it, that’s for sure!