Home » TV and Movies » Spoilers: Iqra and Tina take down Suki in EastEnders? 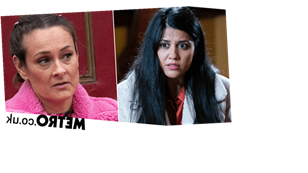 Spoilers: Iqra and Tina take down Suki in EastEnders?

It seems that there are very few chinks to the armour of Suki Panesar (Balvinder Sopal) in EastEnders but Iqra Ahmed (Priya Davdra) is about to make a shocking discovery relating to a secret, underhand deal with the Beale (Adam Woodyatt) – but will she use it to bring down her girlfriend’s scheming mother?

With Suki making it very plain she will never approve of anyone who dates any of her offspring, Iqra has faced a hard time trying to gain an easy life as part of the Panesar clan. And tension rises when Ash (Gurlaine Kaur Garcha) starts mysteriously going out without telling Iqra where she has been, things become strained.

Another issue is their current house guest Tina Carter (Luisa Bradshaw-White). Ash soon makes it clear to Iqra that she hates having her there so Iqra concedes that she will ask Tina to leave – just as Tina walks in. Awkward.

Poor Tina has nowhere to go but as she searches for somewhere to sleep, she later hears Ian badmouthing the Carters as the last owners of the Vic as he tries to gain an interview with the Walford Gazette.

As she fumes, Suki capitalises on Ian’s money issues. Finding him flustered over the money he owes Kathy (Gillian Taylforth), Suki explains her plans to convert the Slaters’ house into flats.

Of course, the Slaters are in the dark about this scheme but Suki needs Ian’s help with the council – and is prepared to financially reward him for his trouble.

Later, as Iqra looks after the restaurant while Ian and Suki scheme, she happens upon a shocking discovery.

With Tina raging at Ian and Iqra finding Suki more than suss, will they join forces to bring the pair down?

And if so, how will Ash react and what price might Iqra and Tina pay?