Home » TV and Movies » Spoilers: Suki makes threat to Jean as her cancer lie is exposed in EastEnders 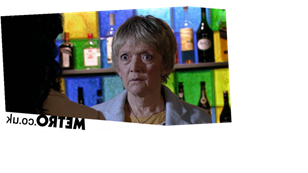 Spoilers: Suki makes threat to Jean as her cancer lie is exposed in EastEnders

Jean Slater (Gillian Wright) has been left shaken to the core in EastEnders tonight as she managed to expose the truth about wicked Suki Panesar’s (Balvinder Sopal) made up cancer – only to be met with a heavy and dark threat not to mess with her.

EastEnders bosses were clear from the outset that Suki would be a villainous and manipulative character and her true colours have been shown to viewers as we have seen her fake that she is dying – while poor Jean has gone through the illness too and lost her beloved Daniel Cook (Ade Edmondson) to it.

Buoyed by Daniel’s last assertion that she ‘be more Jean’, she determined to get to the truth and so invited Suki along to a cancer survivors bake sale. With Shirley Carter (Linda Henry) there for support, Jean eventually put too much pressure on Suki and saw her mask slip as she reacted spitefully and threateningly.

But Jean wasn’t about to be shut down and she headed to the Vic and revealed to Suki’s children the truth about her web of lies. Suki tried to cover things up but back home, she was forced to admit that she hasn’t had cancer and lied about the fact she was dying.

As Ash (Gurlaine Kaur Garcha) stormed out in disgust, cutting all ties with her mother, Vinny and Jags (Shiv Jalota) and (Amar Adatia) wondered if their sister had been right all along.

Suki threatened to leave and insisted that she had done this to hold the family together, using the excuse that they needed to be united from when their father emegrged from prison.

But as Ash was having none of it, Suki implored Kheerat (Jaz Deol) to see that she did it out of love and he was drawn in by her sob stories.

However, Jean has now made an enemy of Suki and there is a fresh tension in the Panesar family – with viewers now wondering just how much Suki is truly capable of.

Will she make Jean regret taking her on?