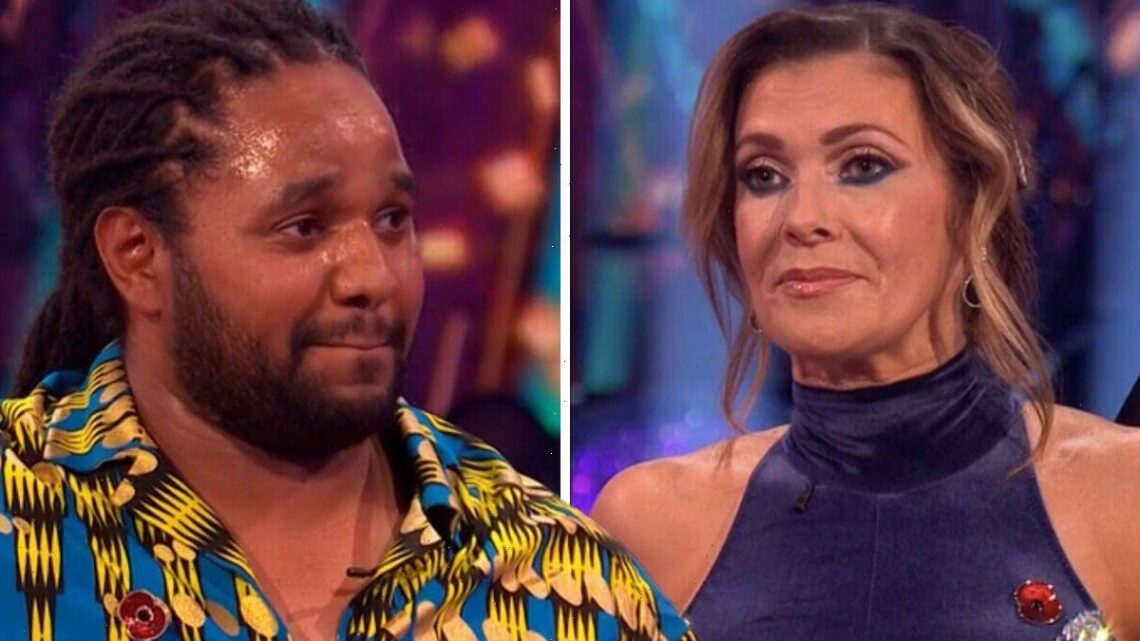 The Strictly Come Dancing cohort will make their debut in the Blackpool ballroom this Saturday as the remaining celebrities take one step closer to the Glitterball Trophy. Both Kym Marsh and Ellie Taylor found themselves in the bottom half of the judges’ leaderboard last weekend and new data has predicted they may be at risk in Blackpool alongside judges’ favourite Hamza Yassin.

Digital marketing agency Mediaworks has measured social media sentiment for the remaining celebrities to predict who will face the dance-off on Saturday.

From November 5 to 17, Kym has fallen to the bottom of the sentiment graph.

Ellie and Hamza are neck and neck behind the Coronation Street star.

In recent weeks, it’s become evident Ellie has a huge amount of public support behind her.

Despite finishing in the dreaded middle-of-the-table spot last week, she sailed through to Blackpool Week.

Meanwhile, Ellie and Johannes finished week seven in ninth position after failing to impress the judges.

Although Hamza has yet to find himself in the dance-off, a bad performance with the judges could put the Countryfile star at risk.

He finished in second and first place on the judges’ leaderboard over the past two weeks so therefore his amount of support with the public is less clear than Ellie’s at this stage.

Will Hamza join Kym in the dreaded dance-off on Saturday?

Last week, Kym and Graziano Di Prime received 31 points for their American Smooth placing them second from the bottom of the leaderboard.

If the Coronation Street fails to impress the judges again, her trip to Blackpool could be her final Strictly outing.

Tyler West, who found himself in the dance-off last weekend, tops the sentiment chart this week.

Will viewers vote for Tyler and Dianne Buswell after realising they were in danger of going home?

They will be performing a Salsa to a KC & The Sunshine Band Megamix.

Ellie and Johannes will take on the American Smooth while Kym and Graziano master the Paso Doble.

Hamza and Jowita Przystal will also dance an American Smooth in Blackpool.

Fleur East and Vito Coppola will be hoping to impress with a Couple’s Choice to a Destiny’s Child Megamix.

Helen Skelton and Gorka Marquez take on the Quickstep while Molly Rainford and Carlos Gu perform the Jive.

Will Mellor and Nancy Xu complete the Strictly line-up with a Samba to I Go To Rio by Hugh Jackman.

Strictly Come Dancing airs on BBC One on Saturday at 7.45pm.