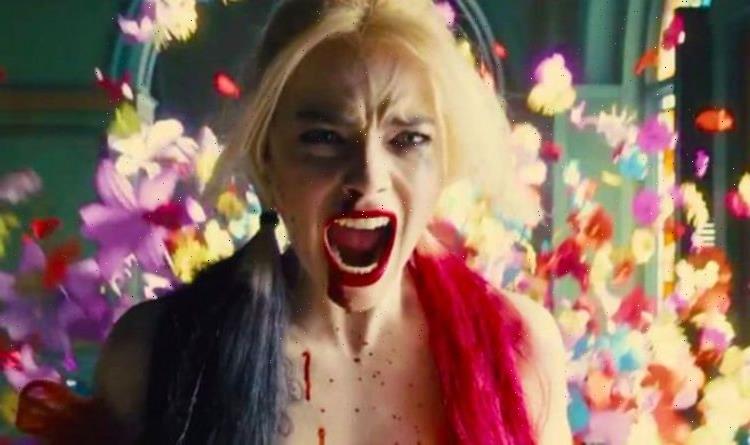 All are very present and (more or less) correct here but this project has also liberated the director from any PG (and frankly PC) Marvel constraints. The gore splatters and the language is blue as the breaks come off and Gunn’s vision runs riot. Everything is ramped up even more in IMAX, with the entire film being formatted for the gigantic screen in all its giddy and juvenile glory.

This time they are dispatched to South American island Corto Maltese to destroy a secret Nazi facility that has been conducting increasingly dangerous experiments for decades. Naturally, nothing is what it seems from the beginning. No surprise, with Viola Davis’ duplicitous Amanda Waller running the ops and even more mercilessly ruthless than ever.

Margot Robbie makes a welcome return as The Joker’s on-off squeeze Harley Quinn, as joyously and psychotically sweet as always. She is balanced by Joel Kinnaman’s brooding Rick Flagg, providing the moral foundation of the film.

New additions include John Cena as the muscle-bound and irony-free Peacemaker, an antihero dedicated to justice, no matter how lives it costs. Idris Elba brings all his considerable droll world-weariness to Bloodsport, a deadly mercenary and marksman with a troubled relationship with his daughter. Basically, Will Smith’s Deadshot from the first film.

Parent issues underpin much of the narrative, with Daniela Melchior’s Ratcatcher 2 (she can control all rats) and David Dastmalchian’s melancholy Polka-Dot Man (he literally fires acid polka-dots from his body) both wrestling with painful family pasts. Melchior, in particular, impressively shoulders the emotional heavy-lifting of the film.

DON’T MISS
Spider-Man No Way Home to include Daredevil star Charlie Cox: huge clue
Kang the Conqueror ‘to appear in at least 6 upcoming Marvel projects’
Loki ending explained: Who was He Who Remains?

Gunn has fantastic track history with gambling on lesser-known and rather unlikely comicbook heroes and villains, especially one who barely talks like the Guardians’ Groot. This time it’s Sylvester Stallone’s increasingly loveable monosyllabic King Shark – a walking killer shark that gleefully munches on anyone at hand when he has “num nums.”

The film is also packed with cameos for the likes of Sean Gunn, Nathan Fillion, and Pete Davidson.

It falls down somewhat on its villains. Apart from Corto Maltese’s repeatedly inept tinpot dictators, Peter Capaldi plays The Thinker, an apparently exceptionally intelligent scientist with syringes sticking out of his head. His grand project is a mind-controlling giant space starfish named Starro. The film can’t resist reminding us that starfish is also slang for anus.

And this may well be the dividing line for audiences who will either delight in both the sight of a gigantic rampaging echinoderm crushing buildings and its rude alternative meaning or, well, not.

Despite the film’s evident pride in being so subversive and unfettered, it is actually rather predictable. It quickly becomes clear it’s better not to get too attached to anyone, especially when they have just had a classic ‘hero moment.’ We have also seen in other recent films the graphically gruesome wiping out of almost entire teams at the very start of their big moment, most notably in Deadpool 2.

Similarly, despite constantly signposting its disdain for conventional plot points and mundane morality, it is still rooted in sentimentality and moral justice It also manipulatively makes sure that the characters we most root for survive.

The question of tone and the gleeful flouting of any ‘political correctness’ is trickier. Yes, Harley Quinn is overly sexualised, but then so too is hunky military leader Presidente General Luna (a ripped and bum-flashing Juan Diego Botto), while John Cena bulges across the screen in his tighty whites. I’m less comfortable with the constantly jiggling bosom of the general’s secretary. A sly commentary on outdated portrayals of women or not, it felt sniggeringly unnecessary.

In fact, too many jokes failed to land, even as the film blatantly (and rather smugly) winked and nudged us to make sure we got them.

Yes, it’s still entertaining and rattles along at a reasonable pace. But scratch below the wafer-thin bonkers plot and gleeful mugging and the film seems to be rather less than the sum of its parts. Which, a little disappointingly for me, was the biggest surprise it delivered.

SUICIDE SQUAD IS OUT NOW IN CINEMAS AND IMAX