Home » TV and Movies » Survivor Recap: The Merge Is Officially Here and Everyone Is a Target — but Where Did the Axe Fall This Time?

Survivor Recap: The Merge Is Officially Here and Everyone Is a Target — but Where Did the Axe Fall This Time?

Knowledge may be power in the game of Survivor, but in some cases, it can also be a death sentence.

I know I gripe about this week in and week out, but we are truly living in the era of zero secrets on Survivor, which takes away the sting from big moves and even bigger blindsides. Was sharing information about James’ advantage the actual reason former Vesi member Dwight was sent to Ponderosa? Maybe not directly. But as mentioned by Cody in Wednesday’s episode, “Dwight’s very good at this game…. He’s done all sorts of good s–t!” And thus, instead of aiming at the guy with the shiny new toy and or the Paralympian superwoman, Cody got his way and Dwight was chopped.

But let’s fill in some of the details here! How was Jeanine feeling after Elie’s elimination, what reptile did Gabler transform into and how did a piece of tree mail shake up this week’s immunity challenge? Read on for the recap!

Elie’s ousting makes Jeanine feel entirely on the outs, so she kicks it into overdrive to figure out what to do next. But she’s not the only one spinning her wheels. Owen is also pretty blindsided. He thought the Baka five were going to stick together, and he tells Dwight that the wild card that is Gabler makes him nervous. He even calls him a “bull in a china shop.” And wait… did Gabler just call himself an “alli-Gabler”? Wow. Lots of animal references here, but you gotta give it to the guy. That last one’s clever. 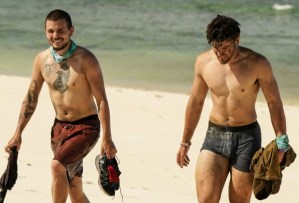 Dwight reads off some new tree mail and the group learns they’ll be competing in pairs. But whether it’s for immunity or reward, they aren’t quite sure. Chalk it up to another merge twist set to keep these players on their toes. (Don’t forget to check out our midseason check-in with host Jeff Probst to hear what else he had to say about this season’s merge.) The group decides that drawing rocks is the best way to select the pairs fairly (and not reveal their cards, of course.)

IMMUNITY IS BACK UP FOR GRABS | Jeff tells them the challenge will be run in three stages, with the first two being run with partners. In Stage 1, players will crawl through a muddy, twisted rope net, then dig for planks; in Stage 2, they must navigate a cargo net and a rope bridge; and finally, the pairs are donezo and it’s an individual test of endurance. The last person left standing wins immunity.

Stage 3 is a showdown between Gabler, Owen, Cody and Dwight. The buckets have 25 percent of the players’ body weight in them, so it’s no easy task. Gabler dedicates the challenge to Noelle, his uncle, Mark the Chicken, every single one of the Survivor gods, the pig that was slaughtered in Season 2, and Christian Hubicki, probably… but the guy’s minute-to-minute devotions serve him well and he wins the challenge! I jest, but putting the spotlight on veterans who have suffered and fought for us is a noble endeavor. Way to go, Gabler.

STRATEGY | While Jeanine and Karla devise a plan, Sami, Dwight, Owen and James find a clue inside the water well, that points them to an advantage hidden underneath their shelter. While most of the crew floats in the ocean, James wastes no time grabbing it, but Dwight then blabs to everyone that James most likely has a power. (Another disappointing case of every single player knowing about an advantage before it’s used. Bummer.) Noelle starts a campaign against James, but Jesse and Karla are threatened by Noelle seemingly calling the shots. Cody then throws Dwight’s name into the mix! If Jesse and Cody can weaken Noelle by taking out her ally, then they can join forces with Coco to take out Baka. (While I don’t exactly understand the strategy of aiming for Dwight instead of Noelle here, what Jesse said about not taking away someone’s agency is very wise! He wants to make sure Cody is heard and respected, and that should hopefully take him/them very far.)

James opens his scroll and it’s the Knowledge Is Power advantage formerly possessed by Geo. James tells Cody, Ryan and Karla about it with hopes of earning their trust. However, Cody knows James knows about his idol bracelet, so he lets Jesse hold on to it temporarily. Jeanine rightly anticipates that it could be the Knowledge Is Power, so she lets Dwight hang on to hers. Noelle then gives her Steal-A-Vote to Owen! Is James smart enough to anticipate their anticipation? 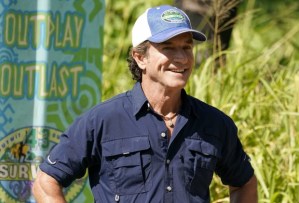 TRIBAL COUNCIL | Jeff once again hammers in the fact that players need to “earn it at every stage of the game,” which leads to chit-chat about how the influx of advantages have affected the game. Having a Plan B isn’t enough. One needs a Plan C, D and maybe even E in order to survive this modern-day version of the game.

Jeff asks Cody for a surfing analogy, and Cody, the bro-iest of all the surf bros, plays ball. But that only prompts Jeff to say that the game is “a little bit like Jaws.” A shark is in the water, but they haven’t seen it yet. Ummm… OK. I mean, there ARE literal sharks in the literal water, but hopefully none of them are like what terrorized the fictional town of Amity Island. Unless this metaphorical shark is the metaphorical “monster” we’ve been hearing so much about.

When Probst calls for idols and advantages, nothing is played and Dwight is voted out of the game with six votes. But did he just walk out with Jeanine’s idol?!

Now it’s your turn! Tell us all of your thoughts about tonight’s episode by dropping some comments below.