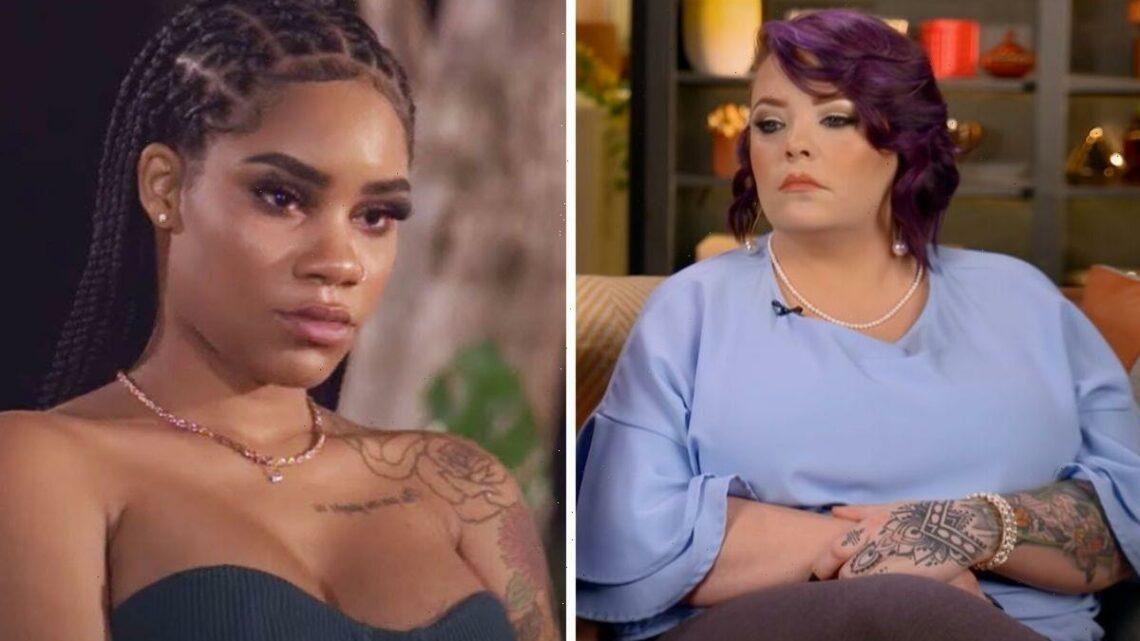 The mums from the Teen Mom franchise returned to screens to star in the reunion spin-off.

As the original series showed the young mothers navigating motherhood and their strained family dynamics, they made an epic return to reconnect with one another.

The likes of Maci McKinney, Catelynn Baltierra, Kayla Sessler, Kiaya Elliott and Farrah Abraham were also cast in the show.

However, with new faces came new conflicts and this was on full display during the latest episode.

Many watched in shock as Briana and Ashley got into a major fight which involved their mothers Roxanne DeJesus and Tea.

Briana threatened to “kick” her costar’s “throat,” moments before Ashely spat on her.

As a result, things turned violent as the four women began throwing things at each other.

While Catelynn watched the ordeal from the sidelines, she showed concern and told Jade Cline Ashley was pregnant.

She revealed: “At the time of this whole altercation between Ashley & Briana, there were only 2 of us girls who knew Ashley was pregnant.

“I was outside when the actual physical part of the fight happened but I told Ashley (after all the yelling incident at dinner) that she doesn’t need this stress, drama, etc. because it’s not good for her & the baby!

“I decided to let Jade know about the Ashley being pregnant so that way everyone would at least know because I wasn’t sure what was going to happen.”

Catelynn continued: “If I were ever trying to fight some girl, I’d want to know if she’s pregnant or not!” (sic)

The microblading expert continued: “If I had a friend I knew who was hiding a pregnancy & she didn’t have control of her emotions & was about to get into a physical altercation with someone.

“You best believe I’d be running up there screaming at everyone involved, ‘She’s pregnant! Don’t touch her!’ so I could try & lessen the risk of something dangerous happening to her & her baby!”

With no regrets about her decision, Catelynn emphasized: “I will ALWAYS put safety over loyalty when it comes to prioritizing what’s more important and I won’t ever be sorry for it.”

Teen Mom Family Reunion season 2 continues Tuesdays on MTV in the US and on Prime Videos in the UK.