Leos Carax had a problem: he wanted to incorporate a small child with preternatural singing prowess into his deranged Sparks brothers movie musical “Annette,” but the director didn’t want to use a series of actual small humans, or digital technology. The solution? A puppet, which turned out to be perhaps the most polarizing element in an already quite polarizing musical starring Adam Driver as a sociopathic, narcissistic comedian called “The Ape of God” opposite Marion Cotillard as his soprano, opera-singing wife. The puppet dares you not to suspend your disbelief, but to actually embrace the artifice of the piece.

“The film seemed impossible to make,” Leos Carax said in a statement shared about his film. “Then an image came to me: a tiny star, alone and lost in the dark infinite — the smallness of Annette in the face of the world. I thought of Masha, a little girl I knew years ago in Ukraine. She was two years old. At times, she almost looked like an old lady, but she was beautiful in a way that moved me. Masha became the inspiration for Annette. But Annette had to be understandable to me — something simple, hand-crafted.”

This journey brought him to two skillful puppet designers and marionette artists: Estelle Charlier and Romuald Collinet, who created nine different bodies for “baby Annette,” who we see in the film evolve from birth to becoming a sentient five-year-old ultimately played by an actual person.

IndieWire sat down with Charlier and Collinet to talk about making this ambitious movie. They were joined by executive producer Olivier Gauriat, who served as translator.

We see Annette from a baby to about five years old, but she also has a range of facial and emotional expressions. How many “Annettes” did you have to build?

Romuald Collinet: There are five different ages that we had to build, and nine bodies altogether. The two ages in the most scenes were one- and two-year-olds, and each had two different bodies. They also had interchangeable arms, hands, legs and faces. The back of the head remains the head, but you have to change the face to have different expressions. There was a total of 15 different expressions. Plus, one animatronic face for the two-year-old version. The faces are static. The only thing that can move are the eyes, which can go left and right.

What techniques during production were used to disguise yourselves as puppeteers pulling the strings within a shot?

Romuald Collinet: That was the bulk of my task, which was to do all that work in camera without any post-production used to erase the puppeteer. The month before the shoot, we had conversations with Leos but also with the set designers and director of photography and camera team to find out where we could be concealed and hidden. But most of the time it was actually on set that we found solutions. We had a mobile workshop with different types of rods, whether straight or curved, with different lengths of strings that would allow us as much as possible to manipulate the puppet without being in the shot.

Estelle Charlier: It was Leos’ request and desire to have as little post-production as possible. 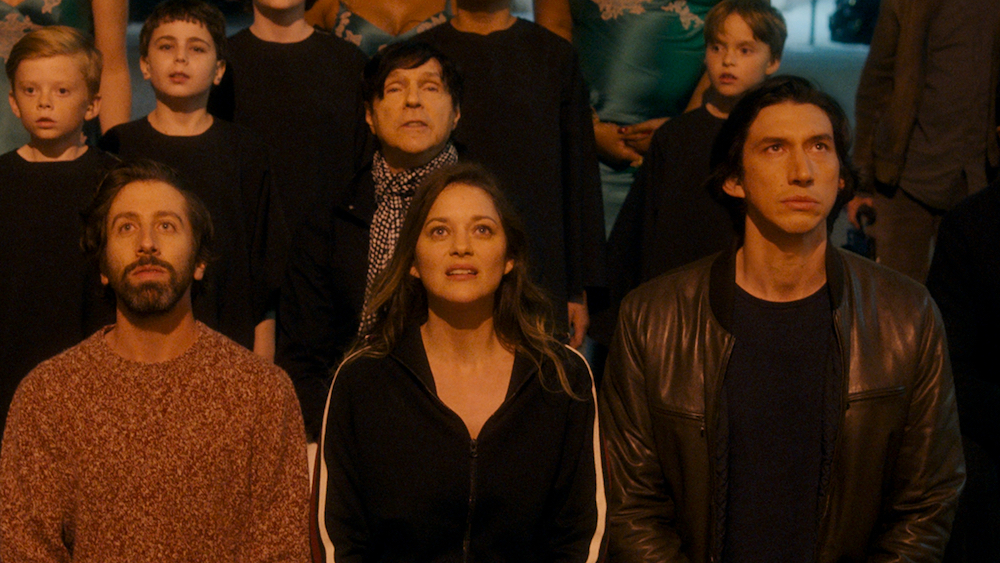 What was the most challenging scene, and why?

Estelle Charlier: One of the most difficult scenes was of Annette’s “first steps,” because we’d been looking for a lot of ways to manipulate the puppet. Whenever the puppet was interacting with actors, they didn’t have the time to do that much rehearsing, so it had to work right away. The scenes that were the most challenging technically, that we knew were going to be, were the concert scenes, which involved multiple puppeteers, where the puppet is walking and singing but also flying. We were able to rehearse those a lot.

What about the climactic “Hyperbowl” scene? This seemed like a moment that involved the most post-production in the movie.

Romuald Collinet: There’s quite a lot of post-production on that scene because it was done on a green screen. That was actually, for us, one of the easiest scenes because it was on green screen, we were dressed in green on top of scaffolding. We didn’t have to try and hide. The more challenging were the scenes done on location or on a built set, where we had to be invisible in position while the actors interacted with the puppet. It was always Leos’ intention for the Hyperbowl scene to be surreal, not anchored in reality, but beyond reality, so that’s also why that scene has a lot of post-production. He didn’t want it to feel real.

Where are you located physically in order to manipulate Annette invisibly during scenes shot on location or on a set?

Estelle Charlier: In some cases, we are actually right next to the physical actor. For example, when you see Simon Helberg play the piano with Annette, I was sitting on the floor right behind him and activating the puppet. In some of those scenes, we actually trained the actors to become the puppeteer while holding Annette.

Romuald Collinet: The real challenge was not to put these actors in a situation of failure by messing up their manipulations, so they had to be really prepared but they found out the scene more specifically sometimes the day of, so we had to make sure the actor was prepared as much as possible within that timeframe and not fail in front of the entire crew, because everything would go downhill from there. The challenge was to get the actors to be successful in their interactions with the puppet.

None of the film team had worked with puppets before, and the puppeteers had never worked with film before, so it was a discovery on both sides. There was a real anxiety that there would be technical problems, so we were learning each other’s fields. But at the end of the film, [producer] Charles Gillibert told us that it was the one side of the project he was most concerned about, but that there were no problems in the end. I said, “Because I didn’t tell you.” But it didn’t impede the production or filming of “Annette.”

Talk about the experience of training Marion Cotillard how to use the puppet.

Romuald Collinet: What we noticed the first time Marion handled the puppet in her hands is that she actually had empathy for the puppet, and had a rapport, which was really important for us because sometimes people can reject the puppet, but there was an immediate connection. We noticed very quickly that Marion was very capable technically because one of the puppets she had to manipulate is actually quite complicated. There’s a grip in the body of the puppet that you activate with your fingers and it does different things to the puppet, and she was quickly very proficient with that puppet.

Estelle Charlier: When I was rehearsing those scenes with Marion and the puppet, I noticed that Marion’s eyes were giving life to the puppet by the way she was looking at the puppet. We felt that the puppet was alive, and that was extraordinary because she didn’t have to do much with her hands. Marion’s facial expressions did the work bringing the puppet to life.

Did Adam Driver have a good rapport with the puppet? The idea with his character is that he doesn’t have empathy for his child.

Romuald Collinet: The first time Adam Driver met Annette, the puppet, was the concert scenes, which is the moment where the character is being exploited by her father. Adam Driver showed up in character, he was playing the part, and he had that rapport with the puppet as well. You’re right, lack of empathy. However, the scenes where he interacted with Annette the baby were shot at a later stage, and he completely changed his approach. There was empathy that came in then.

Can you talk about casting the child [Devyn McDowell] at the end of the movie?

Olivier Gauriat: It was one of the most difficult roles to cast. We looked at a lot of kids around the world before finding this little girl, who’s American. The puppet existed before we found the little girl, so she also had to have some kind of connection with the puppet, and she had to be able to sing properly.

Estelle Charlier: All the puppets existed before we found that girl except the last one, where we had to wait, and then I carved that face once we had casted her to resemble not only that little girl, but also to the previous four puppets.

Romuald Collinet: In our work as puppeteers, we gradually increased the fluidity of our manipulations as Annette grew. When you see her as a baby, she’s like a puppet doll, and as we evolve through the ages, she becomes more real and fluid and human, the climax being the scene at the jail where you see that those movements are very fluid and very real.

“Annette” is now in select theaters and streaming on Amazon Prime.

Horse racing tips: This 13-2 shot can hit the target at Sandown under top apprentice Saffie Osborne

Will Yellowstone season 4 be on Peacock? How to watch Yellowstone
Recent Posts