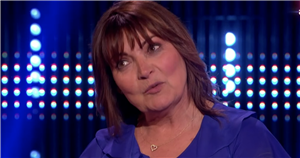 Fans of ITV's The Cube complained that watching Lorraine Kelly and her daughter Rosie Smith on the first challenge made for "painful" viewing.

Lorraine, 61, and her daughter struggled to even achieve £1,000 for their chosen charity after they'd stumbled at the first hurdle.

The twosome came up against it with the initial game which seemed easy but proved to be incredibly difficult.

All they had to do was pass and receive nine small cubes through a square sized hole in the wall while working together.

After losing six lives, viewers at home became "stressed" as they took to Twitter to beg the mum and daughter duo to "use the simplify".

"Omg this is terrible and so stressful. I didn't think they'd do too well with only 20 mins left on the show!" read one comment.

"This is painful to watch," added another online user.

"Why have they not simplified this yet?!" demanded a third.

"Just use your simplify ffs," yelled a fourth.

At one point in the game, host Philip Scofield attempted to offer the pair some words of advice.

Phil said: "One fundamental error, you were both passing them through the same hole – you were crashing them into each other."

With just four lives left, Lorraine and Rosie finally decided to use their simplify which shaved two seconds off of the time they had to complete the game in.

Even after using their lifeline, they still couldn't manage to get it done within the 12 seconds.

Lorraine fumed: "I'm going to wake up screaming it won't go through the hole."

With just two lives remaining and no cash for charity, the Celebrity Gogglebox stars finally managed to complete the first round.

The TV star and mum was not satisfied with just winning £1,000 for her chosen charity and so she decided to attempt the next game with just two lives remaining.

Astoundingly after such a bad start, Rosie and Lorraine went on to beat The Cube in the next two games, scoring £10,000.