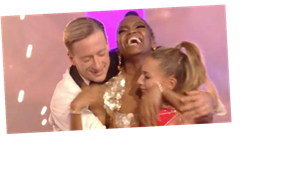 The winners of the second series of The Greatest Dancer winner has been revealed as Michael and Jowita.

The BBC One dancing show returned to our screens tonight for the grand finale of the second series.

Jordan Banjo and Alesha Dixon were back on presenting duty and dance captains Cheryl, Oti Mabuse, Matthew Morrison and Todrick Hall were on hand to offer their expertise advice to the finalists.

Each of the dance captains got to perform with their remaining acts in four powerful routines.

Todrick's act Dancepoint were the first contestants to be given the boot during this evening's live final.

It was Michael and Jowita who were named as winners of the second series of The Greatest Dancer beating off stiff competition from Matthew's act Harrison Vaughan and Lily Joseph, who were mentored by Cheryl.

Michael began taking ballroom and Latin dance classes aged seven and by aged 14, he had won the Junior Polish Championships.

From age 6, Jowita had tried her hand at difference types of dance but it wasn't until her mum took her to ballroom classes aged 11 that she fell in love.

The pair met in 2013 at a dance summer camp in Kraków, Poland, aged 21 and 19. Initially they did not like each other but after being paired together by their coach, they danced together for ten months before they became romantically involved.

They’ve now been together for five years.

"Things just started to change the more we hung out and got to know each other, I started to really like him. He would do funny little things like drive the wrong way home from rehearsals to spend more time together," Jowita told the BBC.

In 2014, they became the Polish Open Latin Champion and they've performed in US cruise ship tours including Priscilla, Rock Of Ages and Legally Blonde.

"We love adding the tricks and lifts into our routine as we want the audience to be wowed," added Michael.

The duo are trained in a number of disciplines including ballroom, salsa, bachata and contemporary.

Michael and Jowita wowed the dance captains week after week with their impressive dance routines and their dance captain Oti jumped for joy when the Latin duo were revealed as the winners of the competition this evening.

The winner of The Greatest Dancer receives a cash prize of £50,000 and a chance to perform on Strictly Come Dancing.

The Greatest Dancer returns for series three next year

So You Think You Can Dance Star Danny Tidwell Dies at 35, Travis Wall and Debbie Allen Pay Tribute