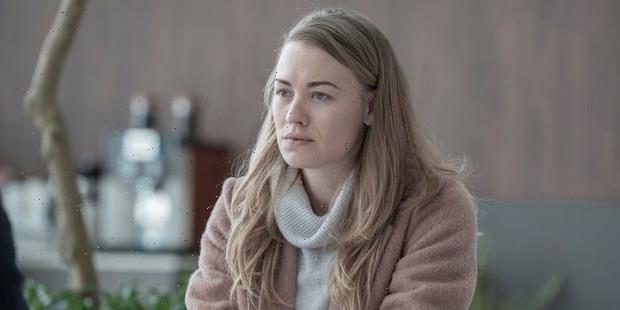 Season 4 of The Handmaid’s Tale hasn’t even come out yet and fans have already got one WILD theory, and TBH, it seems kind of believable. Thanks to some not so subtle clues in the trailer for the upcoming season (and a couple other clues elsewhere which we’ll get to in a second) people are thinking that the infamously childless Serena Joy is somehow pregnant.

And here we’ve all spent three straight seasons thinking it would be impossible for her to have a child, which honestly seemed like it’d be for the best considering she’s, you know, completely unhinged and supports a violent religious cult-run society (just a couple traits that might not make someone a good parent). So what exactly are these clues that Serena’s got a bun in the oven? And are we even sure who the father is? Let’s get into it!

There’s a sonogram in the trailer.

The first major clue that Serena is preggo comes from the season 4 trailer. Fred Waterford is seen pulling a sonogram out of an envelope and looking totally shocked. And really, when you think about it, who else’s sonogram would he be given to look at while he’s in prison? Definitely not June’s, considering she’s long gone from the Waterford’s grips. So the only logical person it could be is Serena.

Ok, but is Fred even the father?

Up until this point, it seemed extremely likely that Fred wasn’t able to have children considering the fact he never once got June pregnant. But on their way up to Canada (before they both got arrested) Fred and Serena stayed at a hotel and it was implied that they got it on one last time, which we would have to assume is when she got pregnant. There’s some tiny speculation that Serena could have had an affair with the hottie in Canada (Mark Tuello), and although he did seem kinda interested in her at first, I highly doubt he would still be down after he found out what Serena did to June.

There’s also a scene from the trailer that shows the Waterfords walking hand-in-hand in full Gilead garb, being cheered on by a crowd of protestors with signs that say things like, “Free the Waterfords” and “Bless you Serena,” so not only do they seem to have found some fans in Canada, but it also seems like they’re still very much together.

An episode description kinda gives it away.

Another massive clue comes from the description of the second episode in season 4. On the show’s IMDB page, it says that in episode 2, “Serena and Fred are bound together by a miracle.” If that’s not further confirmation that Serena is pregnant, then honestly, I don’t know what is.

So, what would happen to their baby?

Seeing as the Waterfords are both imprisoned and likely heading to trial soon, the fate of their baby would essentially rest on whether or not they get convicted of their heinous crimes. Oh, and whether Canada decides to send them back to Gilead. I personally would love to see some poetic justice of Serena having a baby and then experiencing it being ripped away from her like she and her fellow Gileadians did to all the poor handmaids. It would be just a tiny bit of justice in the cruel, cruel world of The Handmaid’s Tale.

Want more details on your favorite shows? Yeah. We know you do. You can find all of our TV coverage here.