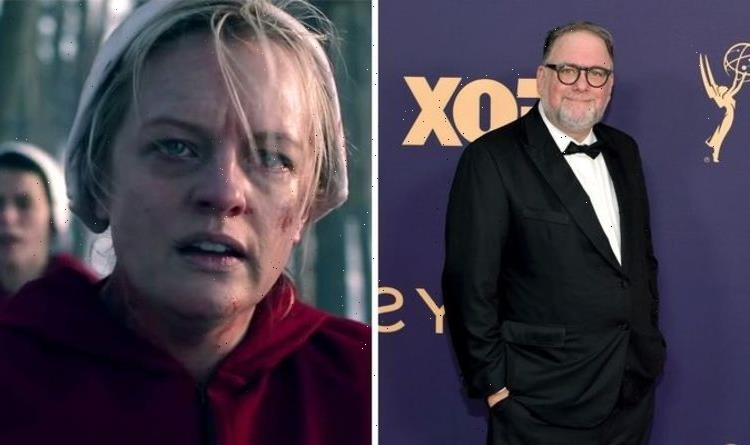 The Handmaid's Tale: June Osborne prepares for trial in teaser

Despite season four ending in June, fans have been eagerly awaiting the release of the upcoming instalment. Hulu’s dystopian series ended on a jaw-dropping cliffhanger and now viewers finally have their highly desired production update from The Handmaid’s Tale showrunner Bruce Miller.

The Handmaid’s Tale first aired in 2017 and after it premiered the show became an instant hit and gained tons of fans across the world.

The series is the onscreen adaptation of a novel written by Margaret Atwood which was published in 1985.

It followed the life of June Osborne (played by Elisabeth Moss) as she tried to escape the patriarchal society of Gilead after it took over the United States government.

She was captured while on the run with her family and was forced to become a Handmaid where she was compelled to produce children for Commander Fred Waterford (Joseph Fiennes) and Serena Joy Waterford (Yvonne Strahovski).

Having been forced apart from her husband Luke Bankole (O.T Bankole) and her daughter Hannah Bankole (Jordana Blake), June made multiple attempts to escape.

In a recent conversation between June and Luke stars and the showrunners Bruce Miller and Warren Littlefield, the question of season five was brought up in a segment of fan questions.

When asked about the expected dates of production and release, creator Bruce answered: “The writer’s room is starting in a week or two.

“Honestly a lot of the cast have projects that were unmoored because of Covid for a million reasons so even though our actors are extraordinarily flexible to fit in the work on our show, everybody has things they do,” he explained.

“We want to encourage people to do things outside of the show, that’s their work and their art, they bring good stuff back but people have lined up all these jobs and now a lot of those jobs moved to after,” he added.

That being said, viewers can potentially expect season five to hit the screens later on in 2022.

The season finale left fans concerned about the fate of June, after her successful escape and then the orchestrated murder of Fred.

In the emotional scenes of episode nine, June was finally reunited with Luke when she officially became a free woman in Canada.

There she was able to give a witness testimony before the court about all the abuse she endured in Gilead.

Fred and Serena were already in custody for their crimes in Gilead and their role in establishing the state.

When all seemed to be going to plan, government representative Mark Tuello (Sam Jaeger) told June the charges against Fred were being dropped after he agreed to provide inside information about Gilead.

Overwhelmed with anger and the desire for revenge, she hatched a plan with her connection in Gilead to trade the Commander for women of the resistance.

After all, Gilead wanted him to face trial there, so instead of going to Geneva to receive immunity, he was driven back to the state he once ruled.

At the borders of Gilead, the plans unexpectedly changed again when he was dropped off at No Man’s Land.
There he was met with June and a heap of other ex-handmaids who wanted revenge, there he was chased and beaten to death.

In the shocking scene, Fred’s headless corpse was hanging on the wall, where he sent many women to die and his finger was sent to Serena.

The Handmaid’s Tale season 4 is available to stream on Hulu in the USA and airs Sundays on Channel 4 in the UK.

Johnny Depp on 'Hollywood's boycott of' him amid 'messy' split