Home » TV and Movies » The Haves and the Have Nots Recap: Colby Gets Wet, [Spoiler] Gets Wild 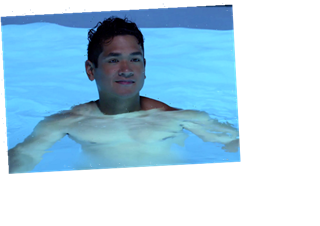 The Haves and the Have Nots Recap: Colby Gets Wet, [Spoiler] Gets Wild

In Tuesday’s penultimate Season 7 episode of The Haves and the Have Nots, Colby refused to believe that he’d landed himself in hot water by going skinny-dipping in Veronica’s pool. Even as inside, the madwoman was telling Samuel, “If you hear gunshots, don’t be alarmed,” Colby was out there ignoring Jeffrey’s warnings and working on his backstroke. And though his pals were sensibly swift in bailing, lest they wind up in a watery grave, Colby refused to be intimidated — and even clapped back when Veronica called him an “it.” “Like you,” he replied. “You’re defined in the middle: not old, not young, not attractive, not unattractive, just… it.” Finally, when she opened fire — and so close to Samuel’s ear, it should have deafened him — Colby amscrayed, leaving the gunwoman to make out with her boy toy. And, as awesome as the scene was, it wasn’t even Colby’s best in “Father’s Day.” Read on, and we’ll get to what was his real highlight of the week. 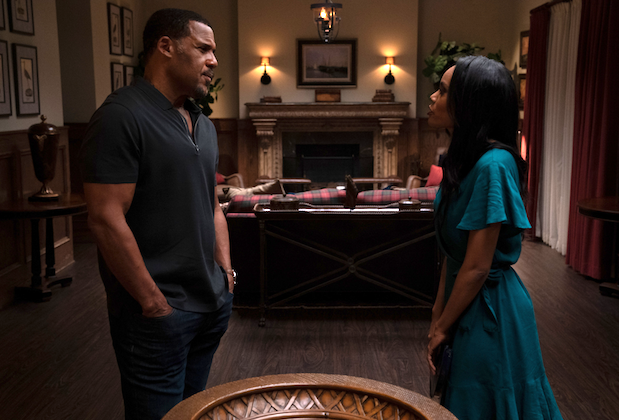 ‘SHE SHOT A HOLE IN HER POOL!’ | Early on, David returned home from a long day of running errands for Jim to find Alissa waiting. Maybe she should’ve approached him the way that Erica had, the hooker said. But she’d wanted to be honest and just admit that she wanted to be kept. Unmoved, David was going to reintroduce her to the door when she reminded him that they’d met years ago, when she’d appeared before him in court. Then 9 years old, she and her sister had been being raped by their father. David had sent the perv to prison and put the girls in fostercare, inadvertently leading to Alissa’s career in prostitution and her sister’s fatal OD. Now, though, she just wanted a home and would do anything (wink, wink) to get it. David’s lips said no some more, but when Alissa dropped to her knees, another part of his anatomy contradicted them. Dang it — I’m sure this means now we won’t get the David/Hanna pairing I was hoping for!

Speaking of Hanna, while all this was going on, she was driving Al wild — albeit far more innocently — by insisting that it never occurred to her to steal her boss’ money and going on about how she loved to be of service. But when he tried to compliment her eyes, she immediately refocused him on the task at hand; he was getting coffee from her, nothing more! Back at Madison’s, Jeffrey questioned whether maybe Colby was on something. He was, replied Colby — it was called not living his whole life in fear. When Madison got home, Colby excused himself to take a call… oh… from a john. The plot thickens! Later, no sooner had Justin finally taken down his I Heart Jeffrey stalker memorial than who should arrive at his door but… Colby! The two were just about to quibble about “Sam” being too fem for Justin when in barged Tanner, who’d cloned his brother’s phone and knew that he was meeting a hustler. When the homophobic brute refused to let Colby leave in one piece, Colby — sorry, “Sam” — kicked the a–hole’s butt. “I’m a former Marine, bitch,” he quipped before demanding payment for services not rendered and exiting stage left. 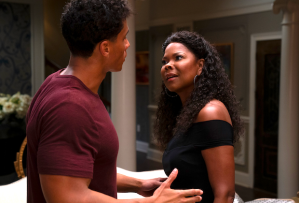 ‘YOU’RE SUCH A NICE WOMAN’ | Elsewhere, Veronica called over Marco, Katheryn’s gigolo/mercenary and offered him two jobs: 1. She wanted him to take care of whomever was following her, and 2. she wanted him to take care of… well, her. Since Katheryn was behind bars, he was interested in at least the first task. But “I don’t like bitches,” he insisted. “Have you ever tried one?” Veronica replied. Touché. Later, the queen bee made a call to have Samuel and Laura investigated and was paid a visit by Judge Modine, apparently a onetime fling who was only too happy to sign the paperwork ordering Jim to pay the child support that he owed Celine. Later still — it was a really long night! — Veronica tried to give Samuel an expensive bottle of wine for fixing her front-door camera, the wire of which he reported had been cut. He couldn’t imagine anybody disliking such a nice lady — arguably the least believable compliment anyone has ever paid. But he wouldn’t accept the vino — Laura would ask too many questions. As it was, he insisted, “I remember nothing” about what had transpired between them. Dumb as he is, that, I could believe!

When David tracked Wyatt’s car to the police station — that thing gets around! — Carmen refused to even tell him whether Jim’s son was there. She was miffed that he was asking for intel suddenly when he hadn’t so much as spoken to her in years. At the Iron Bone, Vinny learned that Katheryn wasn’t ponying up to buy Wyatt’s safety, so on Mama Rose’s orders, he went downstairs to “make it look like an accident.” His idea of doing so? Having goons hold Wyatt still while the Mob boss did a far more thorough job of slitting the rich jerk’s wrists than he himself had. “That’s too much blood,” cried Wyatt without making it clear how much would have been an acceptable amount, especially when the goal was to kill him. Vinny wasn’t listening, anyway. “Before he passes out,” he told his thugs, “put him in a car and leave him somewhere.” So, what did you think of “Father’s Day”? How awesome was it to see Colby kick the crap out of Tanner? Would no neighbors hear Veronica’s gunshots? And is anyone not hoping that Wyatt finally croaks?!?

Hilary Swank’s ‘Away’ Gets Canned After One Season 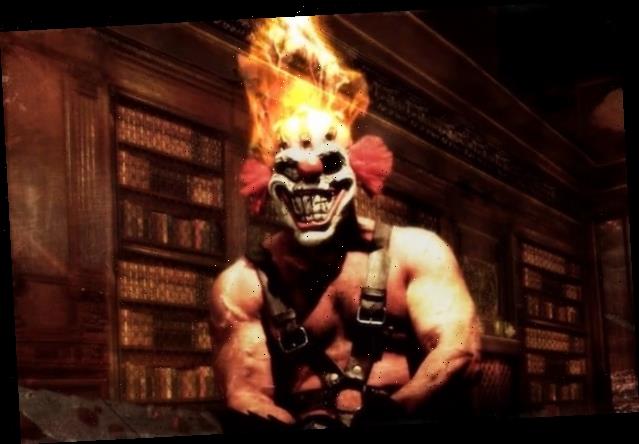 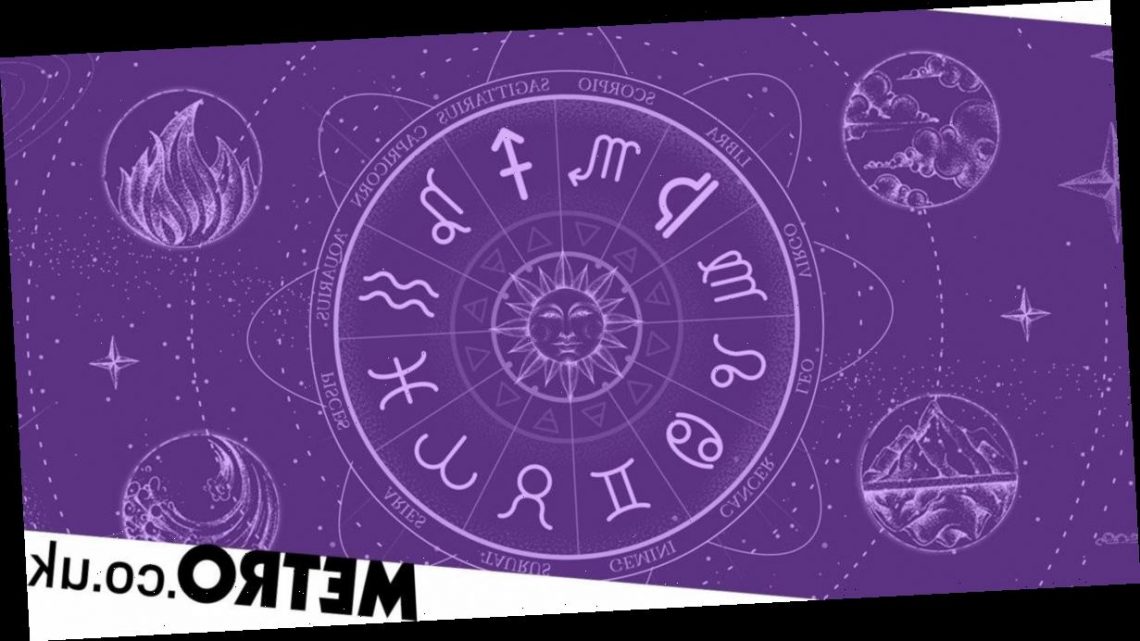 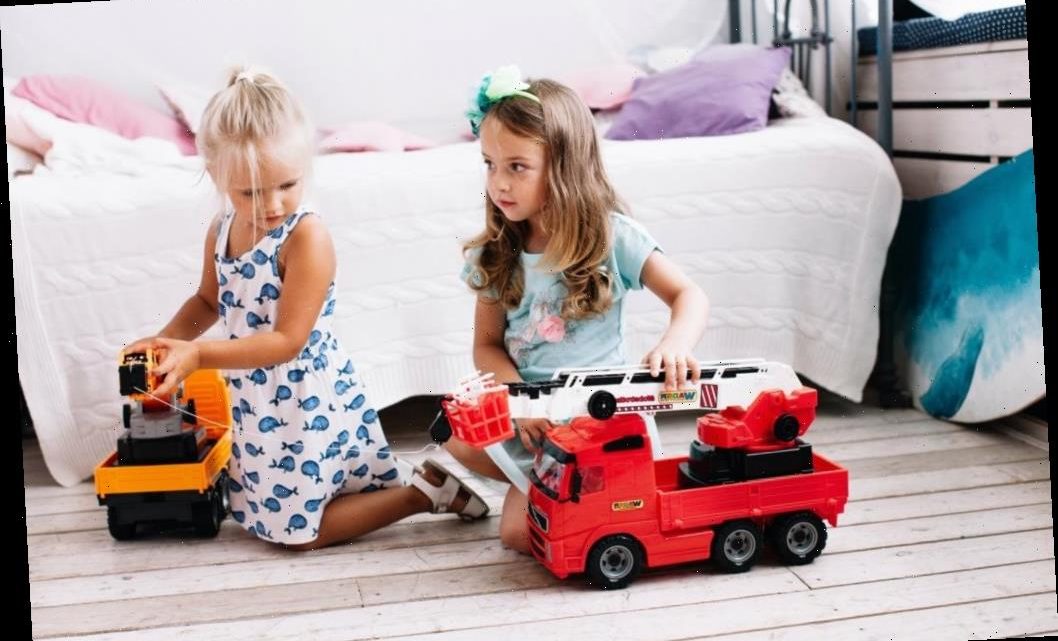