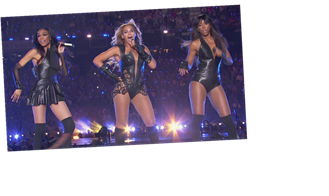 The Most Unforgettable Super Bowl Halftime Shows Ever

As The Weeknd prepares to take the stage for an epic performance at Super Bowl LV, it’s time to take a look back at halftime shows past.

While the Canadian pop star will be in unprecedented territory at this year’s unique, pandemic-restricted game, there’s no denying he’s following in the footsteps of the epic performances that have preceded him in what is often the most-anticipated TV time slot of the year.

Pepsi’s Super Bowl halftime show is the most-watched live performance on TV in America today — but it wasn’t always such a big deal. For the first 24 years, the big game’s halftime entertainment was primarily made up of marching bands and flag-spinning tributes.

When competing networks started counter-programming in the early ’90s, the show’s producers started booking big name acts like New Kids on the Block and Gloria Estefan — but the show would never be the same after Michael Jackson rocked the crowd at Super Bowl XXVII in 1993. From Beyonce to Prince to Michael and Janet Jackson, there’s almost too many iconic moments to count. But we tried!

Scroll down to take a look at some of the most unforgettable performances, and tune in on Sunday, Feb. 7 to see where The Weeknd’s performance ranks on the list!

She turned the lights off! Queen Bey had the Super Bowl stage all to herself in 2013 — except for when she brought back Kelly Rowland and Michelle Williams for a truly epic Destiny’s Child reunion — performing a breathtaking medley of her biggest hits, from “Love on Top” to “Halo,” with flawless choreography to boot. It’s never been confirmed that she actually caused the third-quarter blackout that hit the Superdome shortly after she finished her performance, but, come on.

If Michael Jackson’s 1993 show-stopper was the invention of the modern Super Bowl halftime show, Prince’s rain-soaked seduction was the perfection of the form. The mix of sensuality and pure spectacle has been a part of the format ever since he put the Miami crowd on their feet in the middle of a downpour.

The pop queens broke new ground as the first two Latinas to headline the blockbuster concert, and turned in a show-stopping performance that included plenty of their chart-topping hits, Hustlers-inspired stripper choreography, eight costume changes, cameos from J. Balvin, Bad Bunny and Lopez’s daughter, Emme, and so much more!

Mother Monster got her shot at the halftime stage one year after singing the national anthem at Super Bowl 50, and she wasted no time in proving her performance would be one for the books, leaping off of the roof level of Houston’s NRG Stadium and lowering to the stage. From there, it was non-stop hits as Gaga performed everything from “Born This Way” to “Bad Romance” in a series of stunning, shimmering, football-inspired ensembles.

If you grew up in the ’90s, you remember this show. MJ pulled off an unprecedented spectacular performance that kicked off with the late GRAMMY winner exploding out of the bottom of the stage.

Super Bowl 50 marked Coldplay’s first time on the halftime stage, but it was the second time for Mars (who performed there in 2014) and the third appearance for Beyonce. After Chris Martin and his crew opened things up with “Viva La Vida” and “Paradise,” and Mars put the crowd on its feet for “Uptown Funk,” Queen Bey got in mid-field “Formation” for the first performance of her brand-new single, donning a custom-made outfit that paid homage to the King of Pop. “It feels good to know that the hard work paid off,” Beyonce told ET backstage after the show.

This might have been the most crowded Super Bowl stage ever, but it was worth it. The show was everything that made up early ’00s pop culture — from a Ben Stiller opening sketch to “Bye Bye Bye” to “Don’t Wanna Miss a Thing” — ending with a giant mashup of “Walk This Way.”

ET was with Perry after her show, which is still, to date, the most-watched halftime show ever. The performance featured some major set pieces, from a giant golden lion that the singer rode during her performance of “Roar” to the shooting star she flew around on during “Firework” — not to mention the infamous “Left Shark” backup dancer. Perry’s show attracted more than 120 million viewers — several million more than tuned in for the actual game.

This show gave birth to one of the most infamous scandals in American history. The FCC reportedly received more than 200,000 complaints when Jackson’s nipple became exposed while performing with Timberlake. The performance also gave us a new term: “wardrobe malfunction.”

A year after Janet and JT’s controversial performance, producers were looking to bring some wholesome nostalgia to the show, and who better than Sir Paul? The icon proved to be a major crowd-pleaser by launching into classic tunes like “Drive My Car” and “Live and Let Die.”

Playing hits like “Tenth Avenue Freeze-Out,” “Born to Run” and “Glory Days,” the only complaint about The Boss’ halftime show was that it only lasted for 12 minutes. “Great time. Great crowd,” Springsteen told ET afterward.

Super Bowl LV airs live on CBS and CBS All Access on Sunday, Feb. 7. Kickoff is at 6:30 p.m. ET. Additionally, CBS Sports has a free live stream to watch the Super Bowl, in addition to the CBS Sports App on your mobile device. In the meantime, stay tuned right here to ETonline.com for more exclusive Super Bowl coverage coming your way before game day!