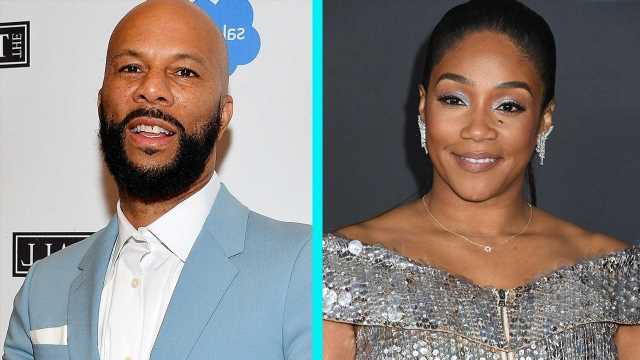 People can’t get enough of Tiffany Haddish and Common!

The couple turned up the heat in their steamy #SilhouetteChallenge video in January — and fans loved it. So will the two ever collaborate again? The answer is yes!

“[Yes], as far as I know from our conversation this morning,” Haddish tells ET’s Kevin Frazier while promoting her and Billy Crystal’s new movie, Here Today. “He’s fantastic. He’s in the studio. You know, I directed and produced that video and edited it myself. We’ll probably make one more, maybe two, but he’s one of those actors that keeps wanting a lot of takes. And I’m just not that type of director. I want it in three. Let’s go move on.”

In the video, Haddish wears a red trench coat, before it changes and the comedian is revealed in silhouette, seemingly rocking only her undergarments. Common then makes an appearance, and the two lock lips before the hilarious ending.

In the meantime, fans can see Haddish co-star alongside Crystal in Here Today. The film follows veteran comedy writer Charlie Burnz (Crystal) after he meets New York singer Emma Payge (Haddish). The two form an unlikely yet hilarious and touching friendship that kicks the generation gap aside and redefines the meaning of love and trust.

“The movie needed her,” Crystal tells ET. “It is a beautiful character, a complicated character. The character grows the first time we meet by chance to the last time we see them together, just joined as great friends. When I saw her, the charm, how funny she was, how fearless she was, the natural personality — and the movie was not set up — and I said, ‘We have to get this to her. This is for her.'”

“And then when I read about her past, about performing at bat mitzvahs and bar mitzvahs and stuff, we had written a scene [where] her character, Emma, sings ‘Piece of my Heart,’ a Janice Joplin song, at a bar mitzvah,” he continues. “So to me, Kevin, this was her destiny. That it was meant to be.”

Crystal met Haddish right away, noting that she was “even more interesting and charming and challenging [of a] person.”

“And I went, ‘This is the character! She has got to do this.’ And I even said to her, ‘It is important that you do this. This is a special movie for you,'” he adds.

Haddish didn’t need convincing. “I love Billy Crystal,” Haddish expresses, detailing their encounter. “We hit it off immediately and he’s telling me about the story and I’m like, ‘Look, look, look, look, I read the script, I read it, you don’t gotta sell me on it. I’m doing it!’ The movie’s done, we’re doing it. It’s done, like, when do we start?… It’s in the can, let’s go!”

As for getting a chance to sing and record songs for the movie, Haddish shares that Crystal got her “the best vocal coach out there, which I needed.”

“I like to sing around the house, and sing and be silly and be fun. But when you’re in a studio, it’s a whole different environment,” she explains. “So I got that great vocal coach, I got in there, sang and it was so much fun.”

“My favorite part was when I got to sing in the middle of the Meatpacking District. Like, whoa, I’m out here singing in front of all these people, and there’s Billy Crystal,” she continues. “I always wanted to be on Star Search, and in my dream, all these celebrities would be sitting in the audience cheering me on. And here I am in the middle of the Meatpacking District singing and there’s Billy Crystal cheering me on and I was like, ‘This is better than Star Search.‘”

Here Today arrives in theaters on May 7.