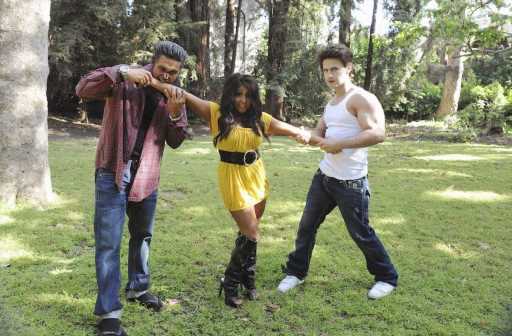 “The Jersey Shore Saga: Friggin’ Twilight” aired on Jimmy Kimmel Live! in 2010. But now, thanks to TikTok, the video starring the Jersey Shore roommates has resurfaced. Jenni “JWoww” Farley recently showed the Twilight spoof to her kids — here’s what they said.

Based on the book series by Stephenie Meyer, Twilight became an instant hit among fans after its 2008 theatrical release. Ironically, not many people anticipated Twilight would be as successful as it has been. But the book saga became a global phenomenon inspiring five movies.

After the release of Twilight, the sequels New Moon, Eclipse, Breaking Dawn – Part 1, and Breaking Dawn – Part 2 have created one of the most successful teen film franchises of all time. Eventually, Twilight started to infiltrate every aspect of pop culture, from music to reality television and even late-night television.

Kimmel took full advantage of the Twilight craze to create a spoof involving another hot topic — Jersey Shore. Nicole “Snooki” Polizzi plays the role of “quiet new girl” Bella in the skit. Mike “The Situation” Sorrentino is her knight in shining armor, Eddie, whose abs sparkle in the sunlight.

Things take a turn when Bella’s new “vampire b*tches” host a birthday party for her. She accidentally cuts herself, causing vampire versions of Farley, Ronnie Ortiz-Magro, and Sammi “Sweetheart” Giancola to bare their fangs.

Vinny Guadagnino also appears in the video. Later, Pauly DelVecchio cameos as a werewolf. Plus, Angelina Pivarnick makes an appearance, playing the role of Victoria from Twilight.

Since the Twilight spoof has seen a resurgence on social media, Farley decided to do a reaction video. “I cannot stop laughing that this Twilight spoof was brought back to TikTok and of course I had to show it to my kids,” she tweeted.

“Jimmy Kimmel decided to do a spoof on Twilight and hired the Jersey Shore cast to be the actors,” Farley explained on her YouTube channel. Farley showed her kids the video to demonstrate how “terrible” she and her Jersey Shore roommates are at acting.

In Farley’s post, her daughter Meilani identifies her Aunt Nicole right away. She has a bit of trouble identifying her Uncle Mike, though.

When Pivarnick pops up in the video, Farley looks shocked. “Girl, I mean I’m not a great actress but — oh God,” says “JWoww.”

The Twilight spoof entertained Farley’s daughter and son Greyson. “Why are my kids really enjoying this?” Farley wonders at the end of the video.

“It was good! I want to watch it again,” Meilani exclaims when the video ends. “Aunt Nicole says a lot of bad words.” The only thing Meilani didn’t like was Farley’s attire. “I didn’t like the yellow,” she said.

Greyson says he thought his mom’s portrayal in the skit was “good.” Like his sister, Greyson wanted to watch it again — if only to see Uncle Mike use his super-strength to push a van. According to Farley, her kids find the spoof entertaining because their acting ability is similar to what they see on TikTok.