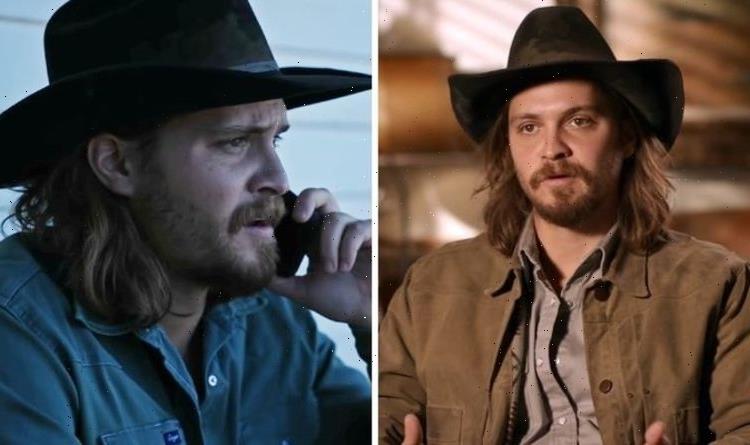 The latest episode of the gripping Paramount series left Kayce Dutton (played by Luke Grimes) at his most vulnerable. After his land was threatened by the arrival of a wolf, he’s encouraged to perform a Native American ritual to fully immerse himself with nature. The stars of Yellowstone have now revealed some hidden meanings within the pivotal scene.

Kayce was led to the tribal initiation site by Thomas Rainwater (Gil Birmingham) and his bodyguard Mo (Mo Brings Plenty) in the closing minutes of episode nine.

He’ll be left there for four whole days without food or water, and will hopefully make it out of the ritual alive when the season finale drops this Sunday.

In a series of behind-the-scenes interviews, Luke Grimes and his Yellowstone co-stars Gil and Mo have explained why Kayce’s encounter with the wolf is so crucial to capping off his season four arc.

“The wolf comes back,” Luke said. “It’s in a place where normally there should not be wolves, so something’s up.”

Kayce is warned not to shoot the wolf if it comes closer, but he insists he’ll have to take action if it goes for his horses.

However, he’s then told the wolf attacking his horses would be a test, and shooting it would lead to failure.

Gil weighed in: “Kayce carries so much trauma, for most of his life. And Kayce’s done a lot of killing.

“It’ll affect you, and he knows just enough that there’s a connection to it but he doesn’t know quite what it is.”

“And that’s when he comes to Rainwater and Mo, which leads to recommending that he do this ceremony to give himself answers, not for anyone else.”

Kayce’s history with the Yellowstone ranch and the Dutton family has been corrupted by murder and corruption up to this point.

Now starting a new life away from his father John (Kevin Costner), his house and a modest patch of land could be the perfect homestead for his wife Monica (Kelsey Asbille) and their son Tate (Brecken Merrill).

In order to be happy with his new life, though, Rainwater and Mo realise Kayce needs to heed the wolf’s warning and cleanse himself of his past mistakes.

“It’s one of the most arduous and challenging journeys that somebody can take,” Gil explained.

“But there’s a purifying and cleansing of stripping all your thoughts to be distilled down to the simplest form of who you actually are.

“Who you really are. And that discovery can change your life.”

Luke recalled: “Mo, in his actual life, is very much tied into these spiritual traditions of his people.

And Mo added: “There’s a true battle that goes on within us. That place is where we begin to find ourselves.”

Kayce’s fate after the ritual has yet to be revealed, but hopefully, he makes it out the other side for the highly anticipated season finale.