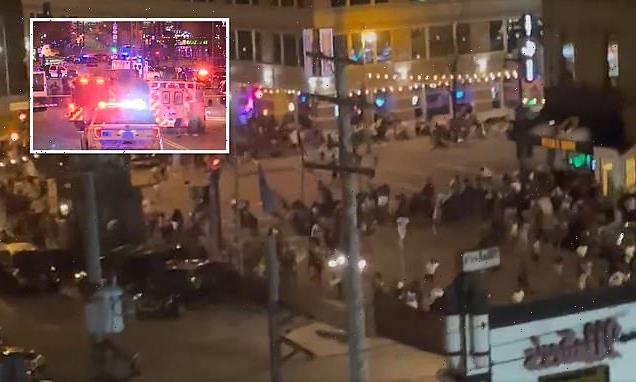 17 people are injured in shooting outside Milwaukee Bucks game

At least 17 people were shot in downtown Milwaukee Friday night, just blocks away from Fiserv Forum, where thousands of fans attended a Milwaukee Bucks’ playoff game only a few hours earlier.

Milwaukee Police say the shooting occurred on Water Street just after 11pm, and the victims of the shooting range in age from 15 to 47 years old. They are all expected to survive, according to WTMJ.

Footage from the scene shows thousands of people fleeing in all directions in downtown Milwaukee after the shooting began.

‘Everybody started running,’ Brittany Bergstrom, who was at a nearby restaurant told FOX 6. ‘There was a stampede, people running over the shrubs, hats, shoes on the ground, drinks spilled everywhere.’

She said her boyfriend pulled her behind a brick wall ‘and if he wouldn’t have, this outcome would be a lot different.

‘And that’s all I know, and everybody took off running and I just kept running.’

Ten people have already been taken into custody for the shooting, and nine guns have been recovered from the scene.

The names of the suspects, and a possible motive have not yet been released.

Police remained on the scene early Saturday morning, with several blocks of the downtown blocked off. 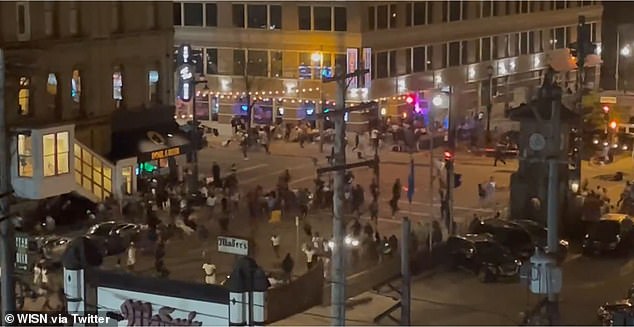 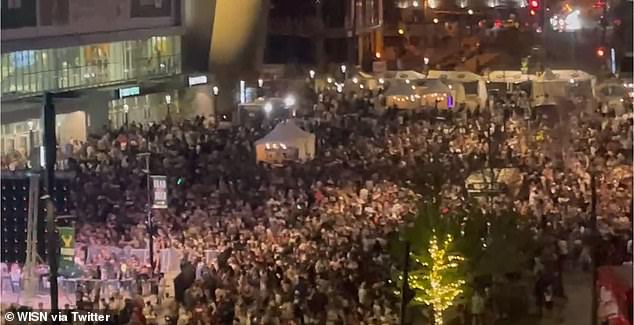 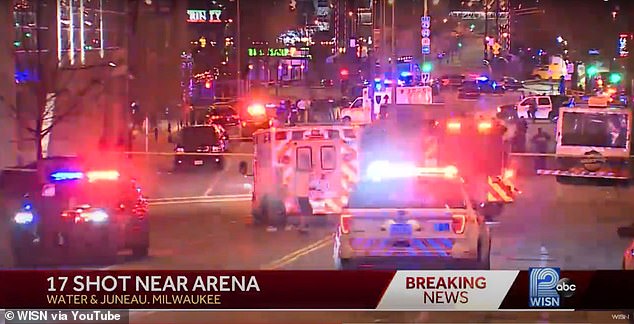 Police remained on the scene through Saturday morning, though 10 people have already been arrested in connection with the shooting 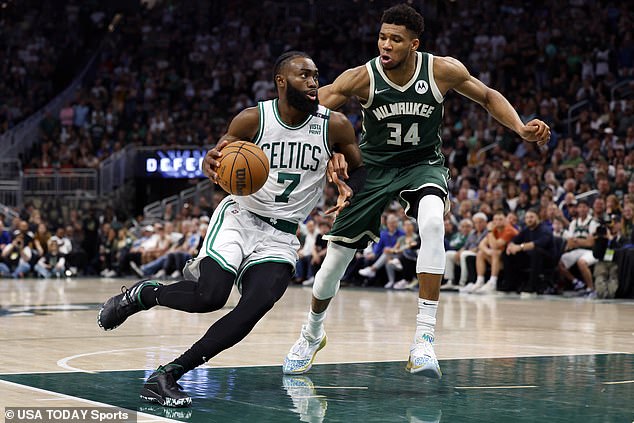 It occurred just blocks from Game Six of the Milwaukee Bucks’ playoff series against the Boston Celtics, which the Celtics won

The mass shooting reportedly happened just hours after three others were injured in another shooting nearby.

Several fights also broke out as the playoff game between the Milwaukee Bucks and the Boston Celtics was ending Friday night, with witnesses saying they heard gunshots with a little more than a minute remaining in the fourth quarter, ESPN reports.

That shooting sent many into a frenzy, and several fights broke out after the game.

By 9pm, FOX News reports, police had already responded to five separate shootings across the city.

It remains unclear whether the shootings are connected or whether they were related to the game, which the Celtics won 108 to 95.

The series will now go into a Game 7 on Sunday night.