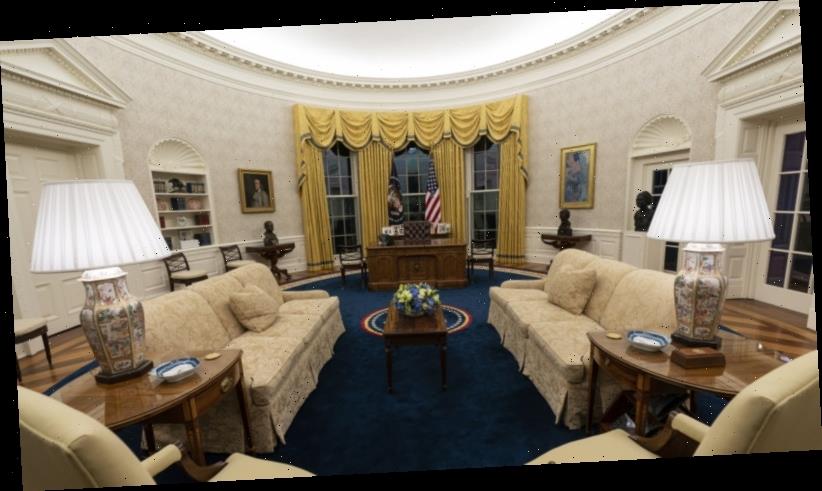 Washington: President Joe Biden has filled the Oval Office with images of American leaders and icons, focusing the room around a massive portrait of Franklin Delano Roosevelt that hangs across from the Resolute Desk. It is a clear nod to a president who helped the country through significant crises, a challenge Biden now also faces.

The Oval Office is synonymous with the power and majesty of the American presidency. Every president changes the decor of the largely symbolic room to offer a sense of their personality and the type of presidency they hope to have. Biden's is notable for the sheer number of portraits and busts of well-known American historical figures. 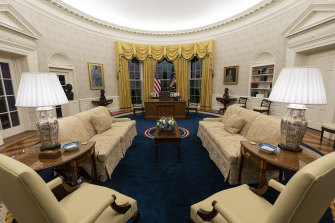 Each president changes the decor of the Oval Office.Credit:AP

Some are paired, with paintings of president Thomas Jefferson and former treasury secretary Alexander Hamilton hung near each other – the two men frequently disagreed and were placed together to illustrate the benefits that come from differing views. Biden's office said the paintings were twinned "as hallmarks of how differences of opinion, expressed within the guardrails of the Republic, are essential to democracy".

"This Oval is an Oval for Day One," said Ashley Williams, the deputy director of Oval Office Operations, as she gave The Washington Post an exclusive 20-minute tour of the office before Biden set foot in the room.

"It was important for President Biden to walk into an Oval that looked like America and started to show the landscape of who he is going to be as president," she said.

Busts of Martin Luther King jnr and Robert F Kennedy flank a fireplace in the office. Biden often refers to the impact that both men made on the country as part of the Civil Rights movement. 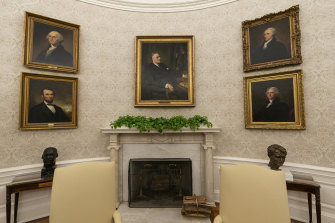 The artworks include a pairing of former President Franklin D. Roosevelt over the mantle of the fireplace.Credit:

Biden is also giving a nod to segments of the Democratic Party's base via historic references. Behind the Resolute desk is a bust of Cesar Chavez. The office also includes busts of Rosa Parks, Eleanor Roosevelt and a sculpture by Allan Houser of the Chiricahua Apache tribe that once belonged to the late Senator Daniel Inouye, of Hawaii, the first Japanese-American elected to both houses of Congress.

A painting of Benjamin Franklin is intended to represent Biden's interest in following science. The painting is stationed near a moon rock set on a bookshelf that is intended to remind Americans of the ambition and accompaniments of earlier generations.

President Donald Trump's light gold drapes have been replaced with a different, darker shade of gold that hung in president Bill Clinton's Oval Office. The dark blue rug was also in the office during the Clinton administration. 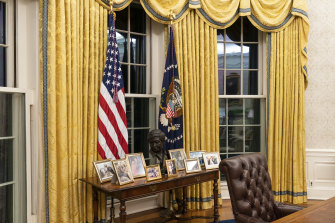 President Donald Trump’s drapes have been replaced with these ones, which were used during Bill Clinton’s presidency.Credit:AP

The furniture was switched out on Inauguration Day, an aide said. During a tour a reporter was asked to avoid stepping on the freshly vacuumed rug so that it would be in pristine condition when Biden arrived. Seeing a fleck of dirt on the rug, one aide stooped down to remove it.

Gone are the flags of branches of the military that Trump displayed behind the Resolute Desk. Biden has installed an American flag and another with a presidential seal.

Also removed was the portrait of former President Andrew Jackson that Trump hung in his office. Trump and Jackson both ran as populists, and Jackson was the first president to be directly elected and he proposed ending the Electoral College.

But for many the decision reinforced some of the allegations of racism coming from the White House. Jackson kept enslaved people and signed the Indian Removal Act, which led to thousands of Native American deaths as tens of thousands were forced to relocate to make room for white settlers.

The act helped lead to the "Trail of Tears," in which an estimated 4000 Cherokee died during the harsh conditions of a long march during a forced relocation in 1838 and 1839. The Cherokees called Jackson "Indian killer"; the Creek called him "Sharp Knife."

The portrait drew ire, particularly during a November 2017 Oval Office event when the Jackson portrait served as a backdrop for Trump as he was honouring Native American "code talkers".

Trump also reinstalled a bust of Winston Churchill in the Oval Office. It had originally been loaned to George W Bush by the British and then returned as Obama took office. A nearly identical bust stood just outside the office in Obama's private residence.

When asked about the bust in 2016, Obama cited aesthetics. "There are only so many tables where you can put busts – otherwise it starts looking a little cluttered," Obama said.

Obama did have a bust of Martin Luther King jnr in the Oval Office, which Trump kept, though he moved it to a different part of the office.

The pièce de résistance in Obama's Oval Office was the Emancipation Proclamation, the document signed by Abraham Lincoln that freed all enslaved people in the Confederate states.

One aspect of the office that hasn't changed: the Resolute Desk, used by Trump and several previous presidents. An aide said that it had not been touched since Trump left on Wednesday morning.

US power and politics

Understand the election result and its aftermath with expert analysis from US correspondent Matthew Knott. Sign up here.

Madeleine McCann suspect Christian B won’t be charged over £1,000 cell rampage and still trying for compensation