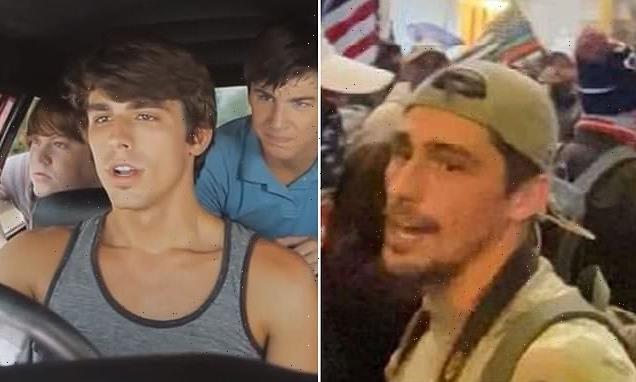 Actor, 33, is arrested for taking part in Capitol riots

B-movie actor, 33, who appeared in flop US remake of The Inbetweeners is arrested for taking part in Capitol riots after he looked in camera and said: ‘Hey Nancy, go f*** yourself’

A B-movie actor who appeared in a flop US remake of a popular British sitcom rioted at the Capitol on January 6 and was filmed saying: ‘Hey Nancy, go f**k yourself,’ investigators say.

Michael Aaron Carico, 33, was arrested on August 11 in Burbank, California after the FBI then identified him as the man in a 30-second video saying: ‘Hey Nancy, go f*** yourself.’

Carico – whose biggest role was in the unsuccessful US remake of The Inbetweeners, a cult British comedy sitcom, has now been charged with entering a restricted building; parading, demonstrating or picketing in a Capitol building; and disorderly conduct, after an informant told the FBI he boasted about being there. 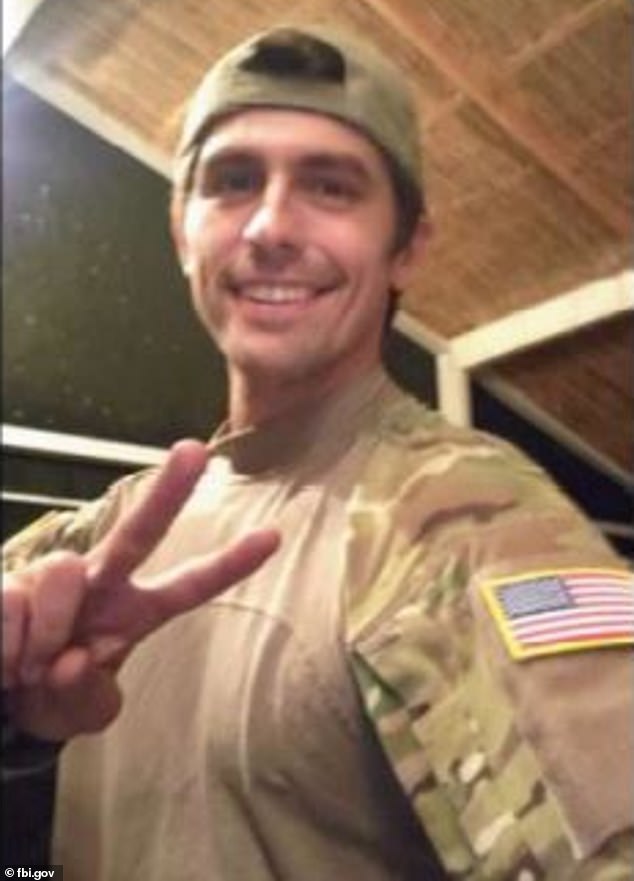 Michael Aaron Carico, 33, was arrested in Burbank, California for allegedly participating in the Capitol riots on January 6 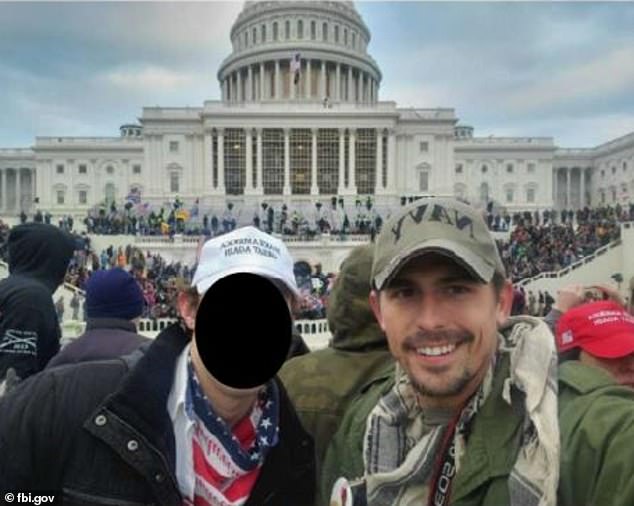 An informant told the FBI he boasted about being inside the building. Carico is pictured on January 6 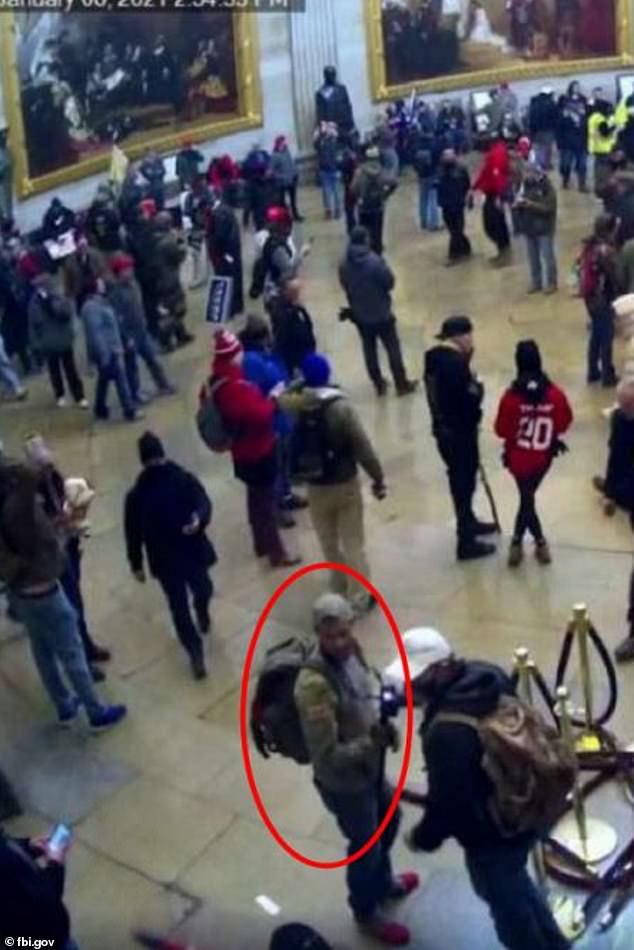 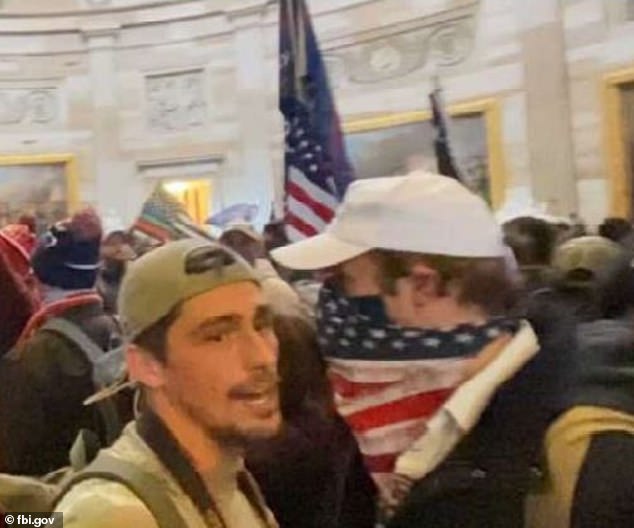 The FBI managed to obtain a warrant for his Google account, and matched his identity to that of a man seen in video footage of the Capitol riot 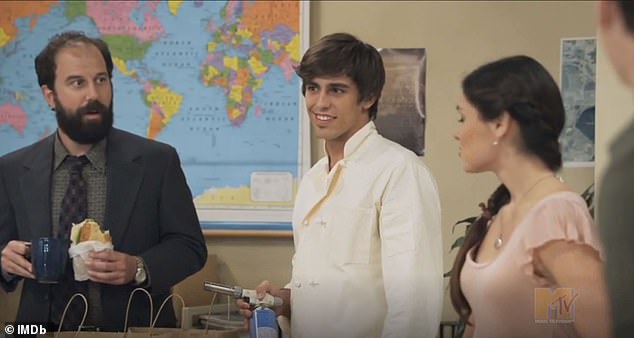 According to charging documents, Carico was busted thanks to an informant who told investigators that the actor had been bragging about his participation.

When another person asked that unidentified informant how he could find the bragger on Facebook, the informant said, Caracio replied ‘michaelaaroncaracio.’

She said she wrote down his name to look it up later.

Investigators with the FBI then tracked down Carico’s personal Instagram page, and saw that he appeared to match the person seen in several videos from the riots, when he allegedly wore a camouflage shirt with brown and black gloves.

They obtained a search warrant for data from the performer’s Google account and say they found photos and videos taken during the assault showing.

Those are said to show Carico in the same outfit in the D.C. metro area, and climbing the ladder to the top of the media tower at the Capitol.

In one 30-second video on his account, investigators say, he sang ‘the land of the free, and the home of the brave,’ before turning directly to the camera and saying ‘Hey Nancy, go f*** yourself,’ apparently a reference to House Speaker Nancy Pelosi.

They also found that a device linked to his Google account showed he was in or near restricted Capitol grounds from 2.18pm to 3.55pm, further suggesting that Carico was there on the day rioters stormed the building to protest Joe Biden’s election victory over Donald Trump.

Carico played Bobby in the American version of The Inbetweeners television show, Keith in TV series The Glades and Randy in movie My Daddy’s in Heaven.

On November 4, one day after the 2020 presidential election, authorities say, he posted a picture to his Instagram showing him in the same outfit he was wearing at the riot, with the caption: ‘America and freedom aren’t going anywhere.’

He included the hashtags, #TimetoFight, #SupremeCourt, #HereWeCome and #KeepAmericaGreat in the since-deleted post.

The Capitol riots began on January 6, after then-President Trump encouraged his supporters to protest the certification of the 2020 election results.

He had planned a Save America rally outside of the White House to protest the election results that morning, which drew thousands of far-right supporters.

Trump spoke to the crowd at around noon, reiterating his unfounded claims that the election had been stolen and encouraged his supporters to march down to the Capitol building.

Less than an hour later, reports broke out of protesters trying to storm the Capitol building, while Capitol Police tried to evacuate those inside. 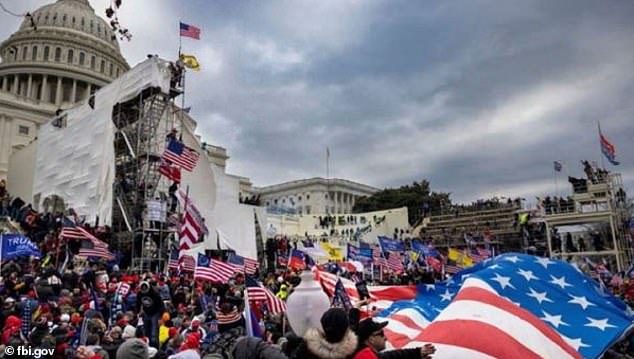 The Capitol insurrection began on January 6 as a group of Trump supporters tried to prevent Congress from certifying the results of the 2020 presidential election.

The Capitol siege: A timeline of events

The rioters were inside the building shortly after 2 p.m., after tearing down metal barricades, beating down the doors and shattering the windows.

At that point, both houses of Congress were put on recess, as lawmakers said they tried to hide from the protesters, who made their way through the building, stealing some government property along the way.

Five people had died in the ensuing chaos, including an officer and several protesters.

More than 570 people have since been arrested, according to CBS News, and more than 30 have pleaded guilty.

Just six of the rioters have been sentenced, CBS reports, as authorities continue to identify more than 300 people who were at the riots, including more than 200 who reportedly assaulted police officers.

The federal government has issued over 900 search warrants, and investigations into the riots have included more than 15,000 hours of surveillance and body-worn camera footage from multiple law enforcement agency.

Additionally, the government has gathered nearly 1,600 electronic devices, over 80,000 reports and 93,000 attachments related to law enforcement interviews and other investigative steps.

In March, FBI Director Chris Wray said Americans throughout the country have submitted more than 270,000 tips to the agency.