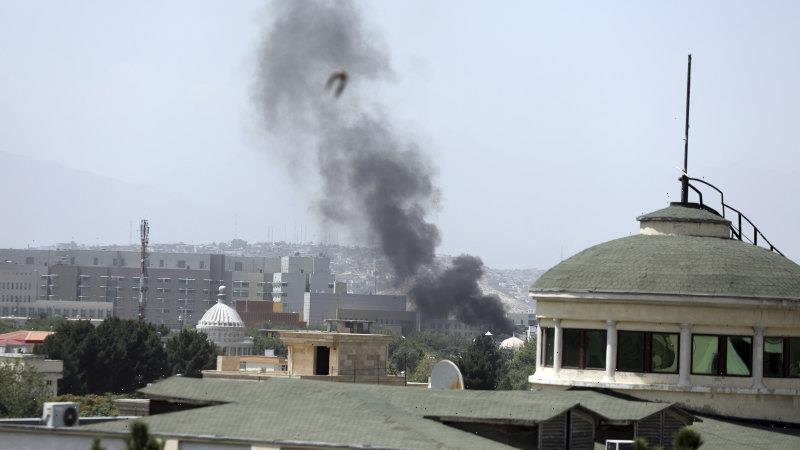 Afghan government falls as the Taliban take charge of Kabul

Kabul: The Taliban have taken control of the Presidential Palace in Kabul after the President fled, signalling the collapse of the Western-backed government two decades after the United States invaded in the wake of the September 11 terrorist attacks.

Al Jazeera English broadcast images of a Taliban commander and fighters with guns inside the Presidential Palace just before 11pm (local time) on Sunday night after what they said was a formal handover of the palace. 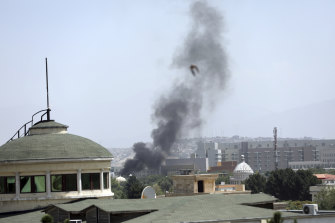 Smoke rises near the US embassy in Kabul on Sunday.Credit:AP

Taliban negotiators had entered the capital earlier on Sunday in a relatively peaceful fashion, initially ordering fighters to stay outside the city’s walls as they sought the unconditional surrender of President Ashraf Ghani and his government.

A pair of Taliban officials told Reuters that they expected a complete handover of power and that there would be no transitional government.

Hours later, Ghani fled Kabul with his core team, including the Vice-President and national security adviser, signalling the collapse of his central government.

Ghani had not given a statement since giving a televised address on Saturday.

On Facebook, he said he felt it was better to leave to avoid bloodshed.

His departure was condemned by his Defence Minister General Bismillah Mohammadi, who said in a tweet that Ghani had sold out his homeland.

Mohammadi and another former cabinet minister were reported to have fled to the UAE, according to local reports citing Kabul airport sources.

Kabul International Airport remained under Western control, with Britain and the United States relocating embassy staff there, some via emergency evacuation helicopter flights.

But a Nato official said all commercial flights had been suspended with only military aircraft allowed to land and take off.

Earlier, an Emirates passenger flight scheduled to land in Kabul turned back to Dubai without landing.

The Taliban said it would not attack foreign embassies as it advanced into the capital shortly after in what they say was an effort to stop any looting.

Many residents of Kabul attempted to flee, fearful of a return to the repressive Taliban regime of the nineties during which women were forced into marriage and risked execution if they went to school. 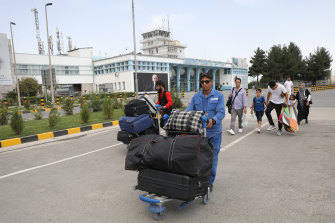 Passengers outside the main terminal at Kabul airport. Thousands of people were trying to flee the Afghan capital as the Taliban took charge of the city.Credit:AP

There were traffic jams and queues to withdraw bank savings, but the panic appeared to abate by late afternoon as the Taliban urged people to stay put, promising there would be no recriminations.

He promised that women would have access to work and education, but that they would be required to observe the hijab.

Shaheen said fighters had been ordered to stay outside the city because the Taliban wanted to “avoid bloodshed and destruction to the properties and the people … and not give chance to looters.”

The collapse of the US-backed Ghani government was swift, with the Taliban reclaiming power with lightning speed following US President Joe Biden’s withdrawal of troops in May.

The Biden administration doubled down on its decision despite widespread condemnation and accusations of betrayal and abandonment, with US Secretary of State Antony Blinken telling CNN that the Afghan military had been “unable to defend the country.”

He conceded that the fall had happened more quickly than anticipated but denied it was reminiscent of the US’s hasty exit from Vietnam. “This is manifestly not Saigon,” he said in a separate interview on America’s ABC.

The Taliban’s largely bloodless victory in Kabul came just 10 days after they took control of the provincial capital Zaranj, in the south.

Within a week, four more key capitals had fallen – some in a single day – including the country’s second-most populous city Kandahar. By Sunday, the Taliban had encircled Kabul prompting chaos at the airport as many tried to flee.

Governments, including Canada and France, evacuated their embassy staff, but Russia said it would not retreat as it had been assured its staff would be safe in Kabul.

France’s Ambassador in Afghanistan tweeted a wordless video of himself on a military aircraft leaving what the Green Zone where government buildings, embassies and residences were housed.

with AP and Reuters