London: The world must brace for apocalyptic food price rises in the face of surging inflation if Ukraine is unable to ship wheat and cooking oils out of its main ports because of a Russian blockade, the Governor of the Bank of England has warned.

Andrew Bailey said on Tuesday morning (AEST) that he was “very uncomfortable” because rises in inflation – driven by a series of external shocks, including the war and supply chain issues caused by lockdowns in China – were creating a “very big income shock” that could intensify in coming months and risk double-digit inflation before the end of the year. 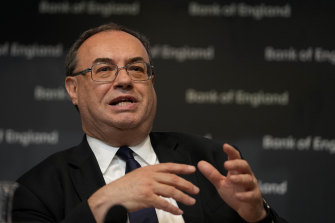 Andrew Bailey, Governor of the Bank of EnglandCredit:AP

Russia’s invasion of its neighbour sent wheat prices to a 14-year high in March, with global prices for grains, cooking oils, fuel and fertiliser rising at the fastest rate in 30 years as the conflict disrupts shipping in the Black Sea and the United Nations warns it will worsen a food crisis in poor countries.

Ukraine is a major exporter of corn, barley, sunflower oil and rapeseed oil, while Russia and Belarus – which has backed Moscow in its war in Ukraine – account for more than 40 per cent of global exports of crop nutrient potash.

The Wall Street Journal reported on Monday that UN Secretary-General Antonio Guterres has asked the Kremlin to allow the shipment of some Ukrainian grain in return for moves to help facilitate Russian and Belarusian exports of potash fertiliser.

Disruption to supply has also thrown poorer countries reliant on Ukrainian crops, such as Lebanon and Egypt, into social and political turmoil. India announced an export ban on wheat on Saturday in response to global shortages driving up prices. The World Bank forecasts wheat prices could rise more than 40 per cent this year. 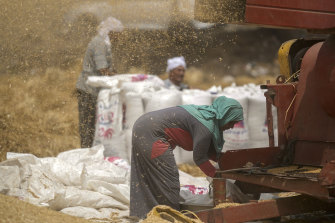 Egypt is one of the nations particularly reliant on Ukrainian wheat exports. Credit:AP

Indonesia banned most exports of palm oil in late April to ensure domestic supplies of cooking oil, cutting off supplies from the world’s largest producer of the edible oil used in everything from cakes to margarine.

Dairy and meat prices reached a record in April, according to the UN food agency, reflecting increasing global demand for protein and high prices for animal feed – mainly corn and soybeans.

Bailey told British MPs at a Treasury Select Committee hearing that he had spoken to Ukraine’s finance minister, warning he was going to “sound rather apocalyptic” about the food situation.

“Ukraine does have food in store, but it can’t get it out at the moment. While [the finance minister] was optimistic about crop planting, he said at the moment we have no way of shipping it out as things stand, and it is getting worse.

“…I am by no stretch of the imagination a military strategist, but whatever can be done to help Ukraine get its food out would be a huge contribution.” 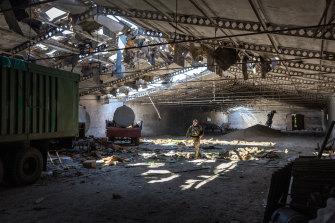 UN food chief David Beasley warned the body’s security council in March that the World Food Program bought 50 per of its grain from Ukraine and the war was threatening its ability to feed some 125 million people globally.

Almost 40 countries count on Russia and Ukraine for more than half of their wheat imports, including some of the poorest and most vulnerable in the world, including Syria, Yemen, Somalia and Democratic Republic of Congo.

Kyiv’s agriculture ministry says Ukraine’s grain exports had plunged to about 500,000 tonnes a month, down from 5 million tonnes before the war and resulting in $US1.5 billion in lost income. It has been forced to now export by train or its small Danube River ports.

The Group of Seven leading economies met at the weekend to declare the war was stoking a global food and energy crisis, and called for urgent measures to unblock stores of grain that Putin’s forces are preventing from leaving Ukraine.

He said up to 50 million people, particularly in Africa and the Middle East, would face hunger in the coming months unless ways are found to release the grain.

“We need to make sure that these cereals are sent to the world,” she told reporters. “If not, millions of people will be facing famine.”