As Freedom Day sparks a rise in casualties, we join medics on Britain's boozy front-line

IT’S the first pay-day weekend since Freedom Day, and revellers across Birmingham are letting rip.

At 1am on Saturday night, the city’s famed Broad Street nightclub hotspot is packed. 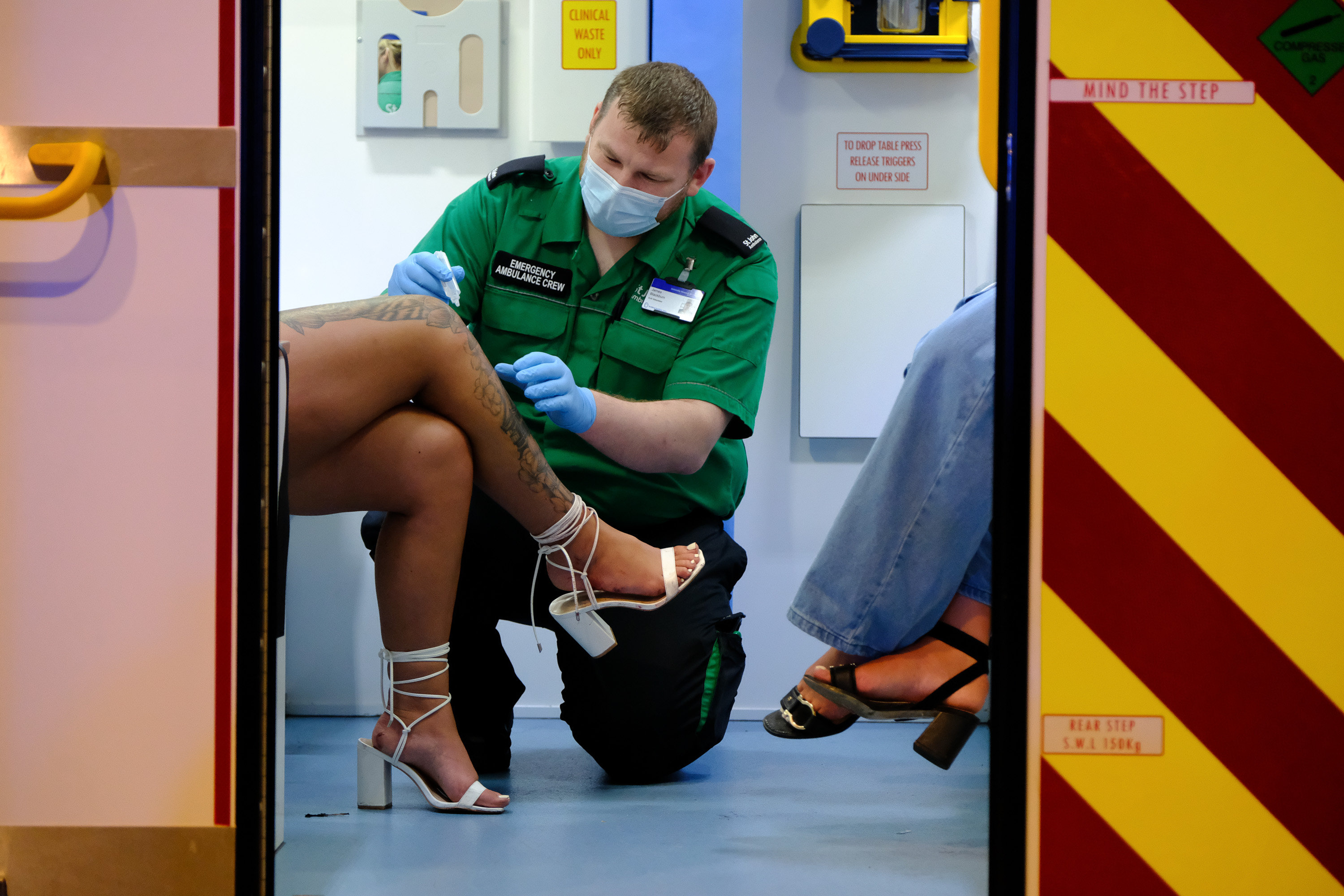 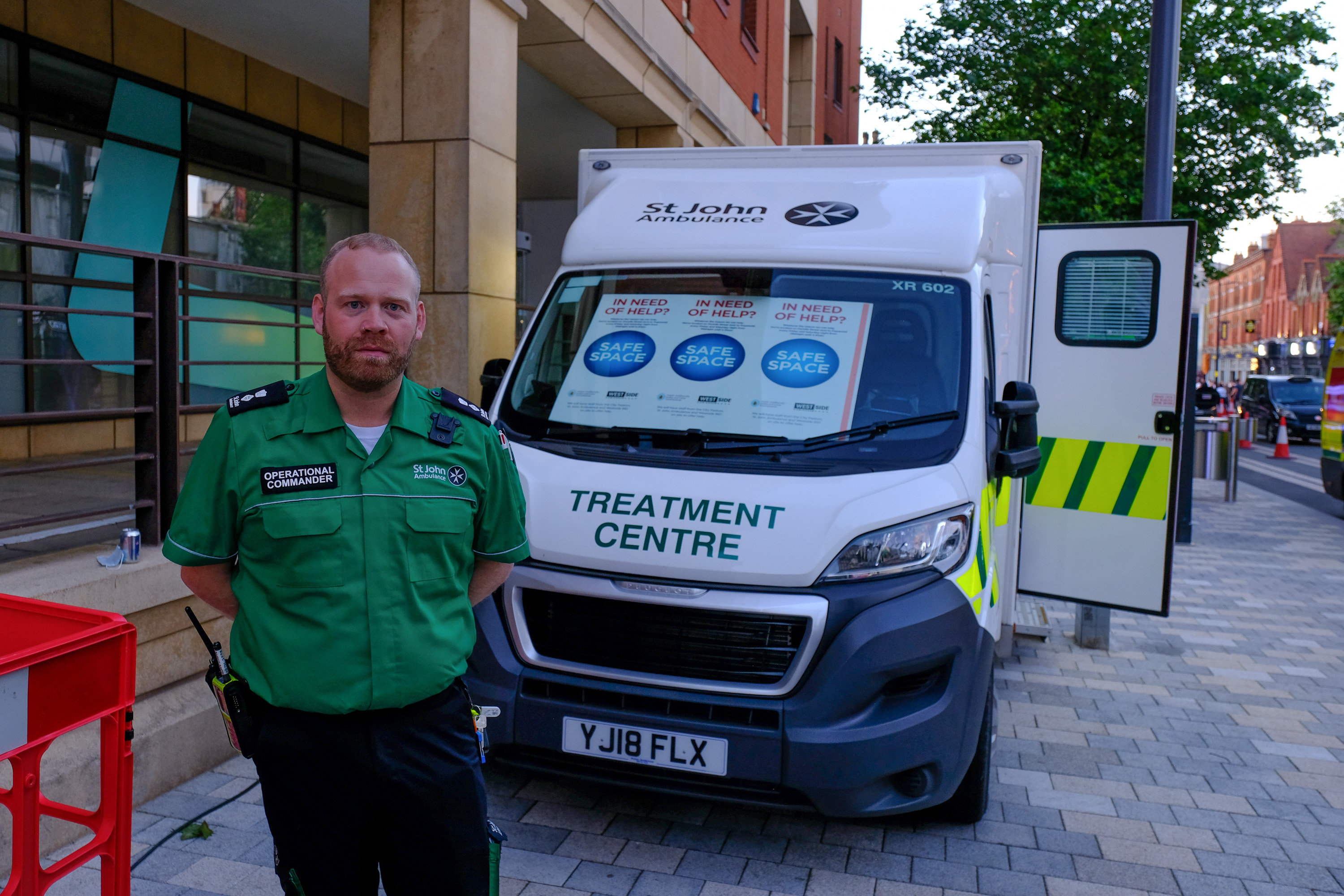 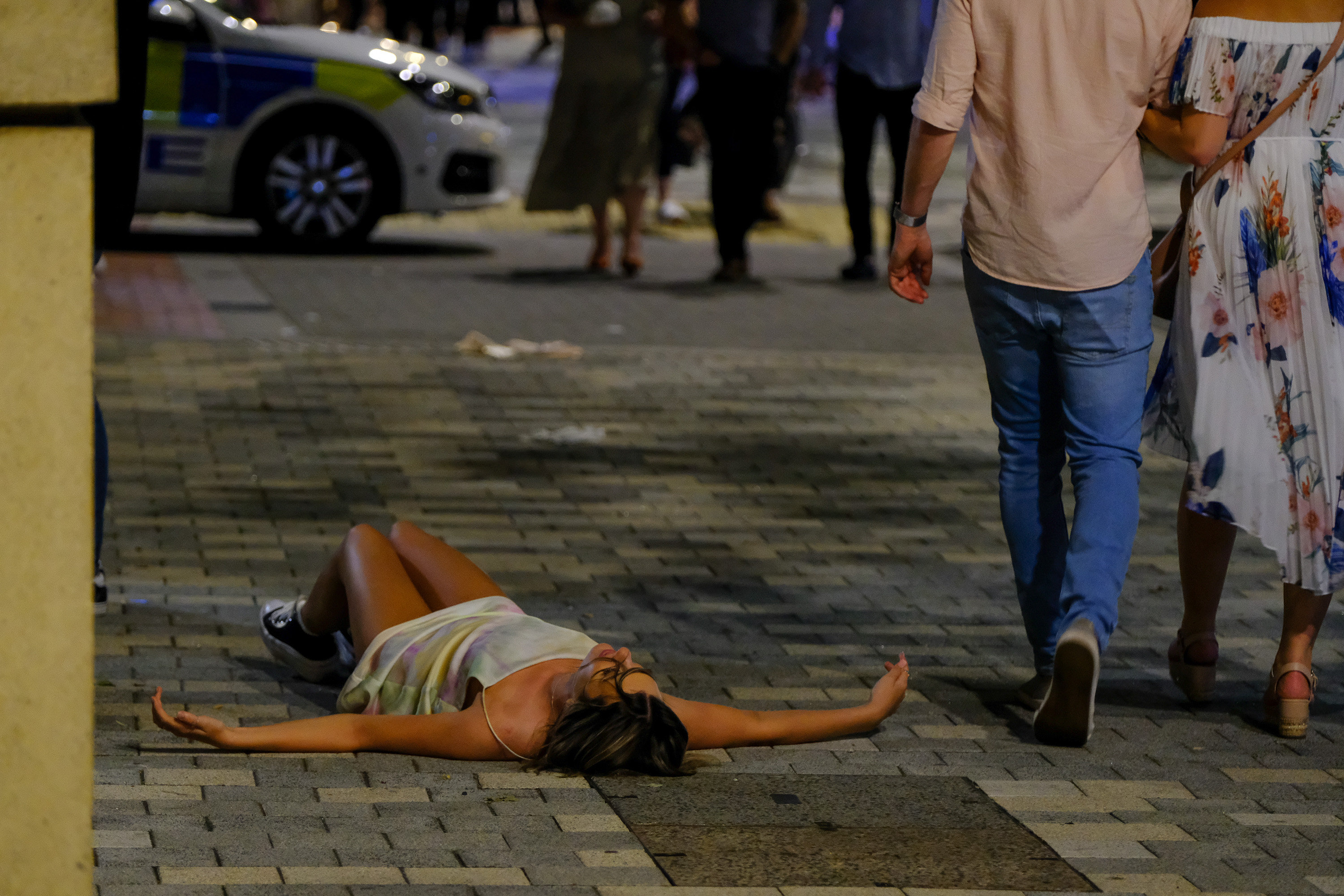 Queues for the buzzing nightspots snake down the road — where drunken mayhem reigns.

For 18 months, people have been unable to go wild on the dancefloor. Now, as lockdown restrictions ease, drinkers nationwide are making the most of their new freedoms — and throwing caution to the wind.

Julia Robinson is a seasoned helper with St John Ambulance, the healthcare charity that provides first aid on Britain’s streets, and for one night The Sun has joined its highly trained volunteers to see what life is like on boozy Britain’s front-line.

Julia tells us: “It’s that blitz mentality — we don’t know where we’ll be in the autumn.

“Everyone has been cooped up at home and just wants to let off a bit of steam.”

But with many drinkers out of practice, the post-Freedom Day celebrations have some dangerous drawbacks. Since Covid rules were lifted, the number of injured or drunken punters needing medical attention on nights out has rocketed.

St John Ambulance says it is busier than ever treating injured revellers, providing much-needed relief to our hospitals.

The charity’s Ambulance and Community Response Director, Craig Harman, says: “The first weekend after the easing of Covid restrictions was among the busiest we’ve ever seen, with more than three times as many patients as we’d normally see.”

The St John team in Birmingham was one of the busiest on the weekend that restrictions eased, treating 72 patients in a single night, three times their weekend average.

Leading the team, Birmingham Operational Commander Eugene Collins says: “Our aim is to provide support to anyone in need of our service — anyone who is vulnerable.

It’s that blitz mentality — we don’t know where we’ll be in the autumn.

“If they have lost a friend, need to charge their phone or require medical aid, we’re here to help.”

Almost as soon as the team’s mobile care unit — or “booze bus” — is in position outside the busiest bars at 8pm, it is clear that some people have got carried away with the post-lockdown partying.

Three women decked in summer dresses and wobbly heels are among the first to arrive. On the dancefloor, one had attempted to do the splits but instead slipped and fell on some broken glass, cutting open her knee.

As volunteer James Blackburn cleans and dresses her wound, the chatty patient says she loves being back out on the town, but feels some people are getting out of control.

She says: “I feel like it’s all because Covid’s happened and everyone is enjoying themselves but they’re all going a bit too far now.”

As she gets back on her feet, her pals snap selfies from the booze bus bed, then head out into the night.

At 1am, revellers begin to spill from the bars, hundreds gathering in the blocked-off road where ravers kick off their shoes, braving pavements strewn with glass barefoot. Other punters nod off on the kerb.

After 12 years of volunteering, ambulance crew member James knows that the busiest hour is yet to come. The 32-year-old, a network manager in a secondary school when he is not volunteering, says: “The vibe is just starting to change now. This is when it starts to get busy.

Everyone is enjoying themselves but they’re all going a bit too far now.

“We’re not yet at the point when we’re having to give one-on-one care to patients. That might come later.”

Minutes later a man arrives, his shoulder slumped and his arm hung over his partner’s back for support.

As he winces in pain, the team help him into the unit. Looking on, his concerned partner says: “There was a fight down the street, and we just got pulled into it. That’s why I never come down here any more. It’s always the same.”

As the team give him pain relief and advise him to go to hospital to establish if his arm is fractured, four more patients arrive in need of help.

They range from tipsy to very drunk, and it’s up to the volunteers and two paramedics to assess each one and decide how best to respond.

Some might simply need to rehydrate and sleep off the alcohol in a safe space. Others may need further emergency treatment in hospital.

One girl is brought sobbing into the unit. An SJA volunteer sits with her as she calms down and is ready to head home with her friends.

Moments later, an unconscious woman is wheeled in, wrapped in a blanket and with a sick bowl carefully tucked under her chin.

As her condition worsens, four volunteers lift her on to a blanket and place her in the recovery position while they wait for an ambulance.

Then a man covered in blood walks in, pressing a tissue to his head, and insists: “I’m not hurt, I’m just so angry. The man got away, that’s the worst thing.”

But despite the sudden flare of activity, James and his team remain calm. He says: “For us it’s about helping the ambulances and hospitals by giving first aid to people here and now, and from there deciding who needs to go to A&E. It eases some of the pressure.” 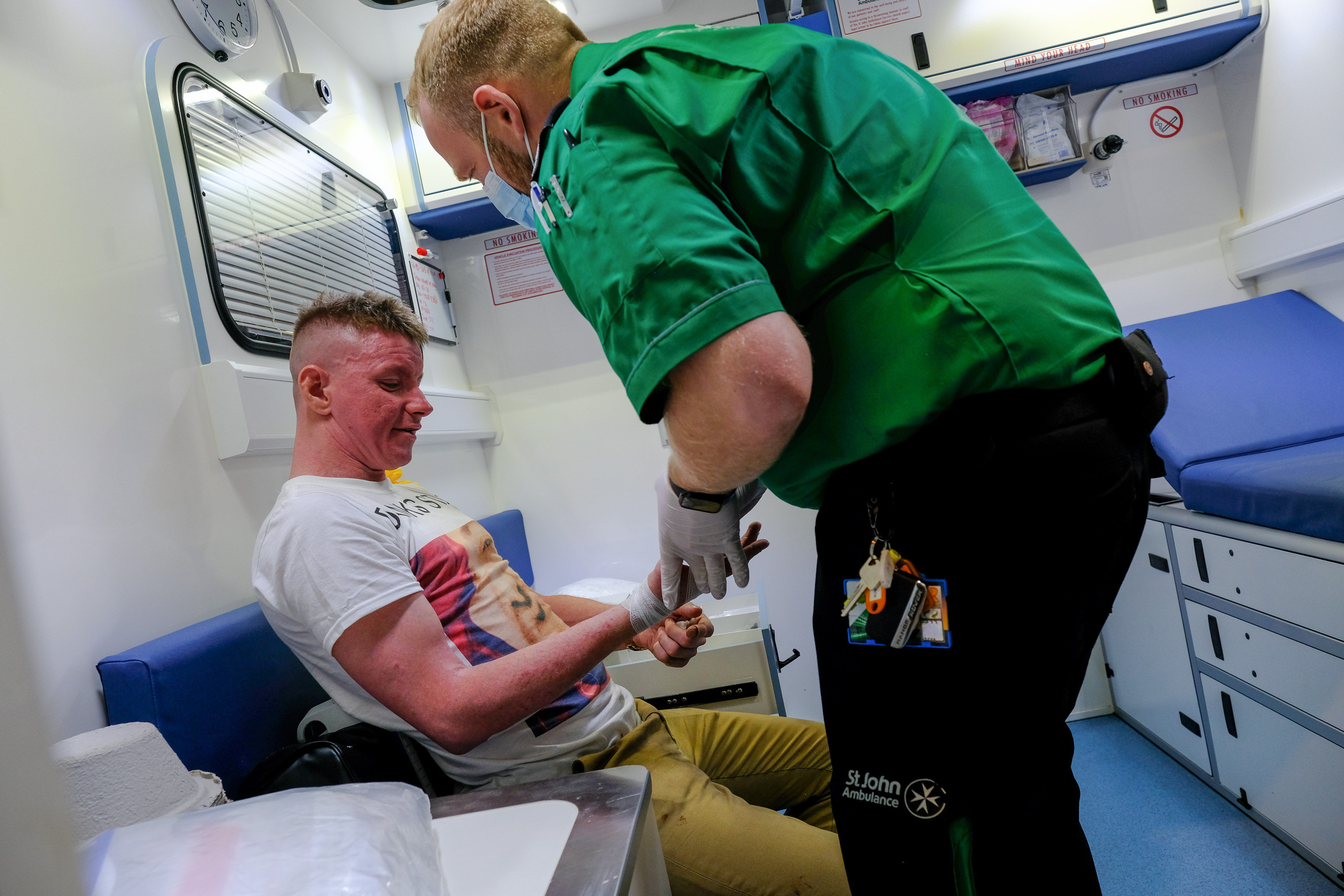 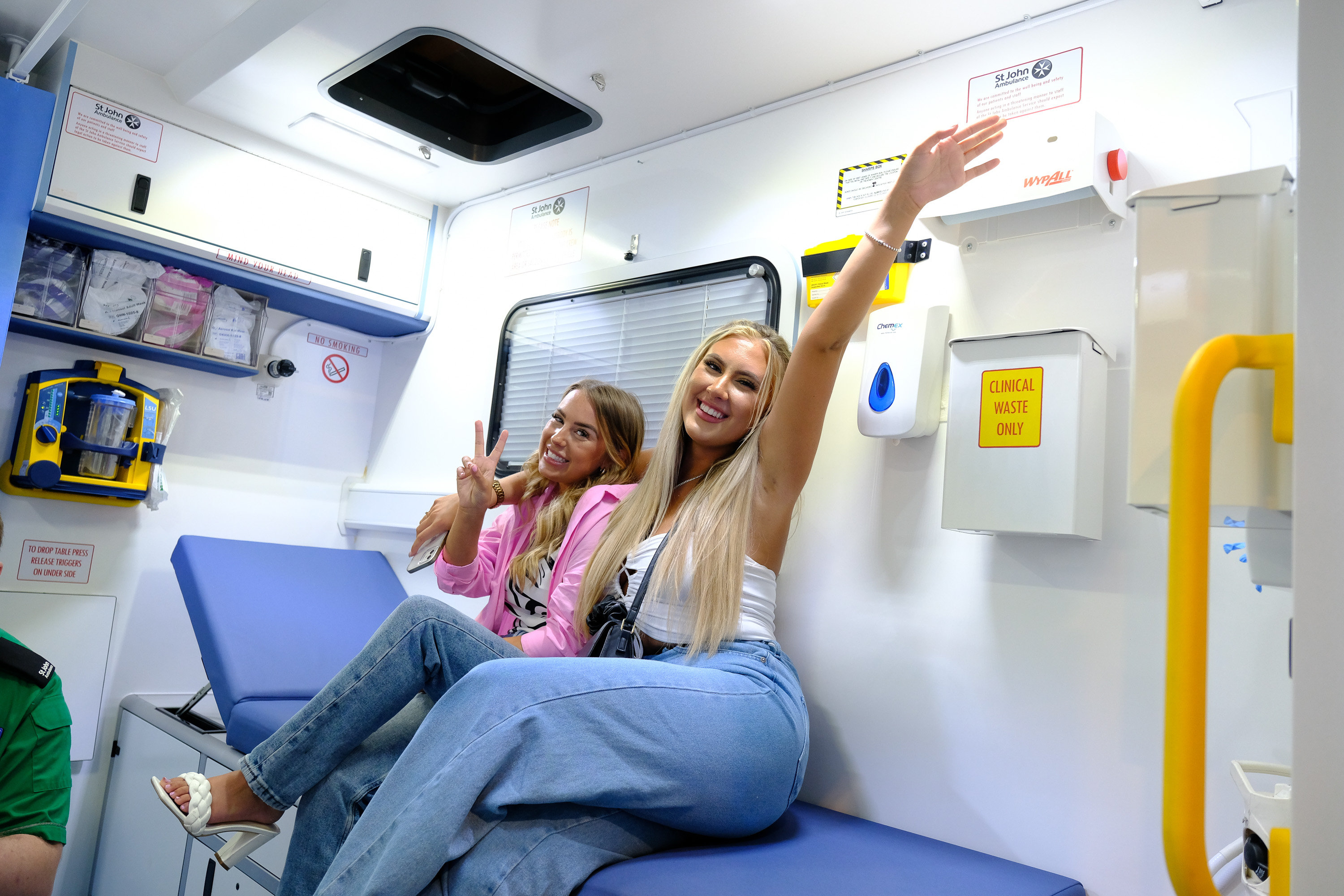 From 8pm until the small hours, the volunteers have helped Brummies celebrate their freedom safely.

For SJA chief Eugene, the message is simple: “Come out, enjoy yourselves, know your limits, drink responsibly and stay with your friends to get home safely.

“If you see someone who is vulnerable, call us and get someone to come and help.”