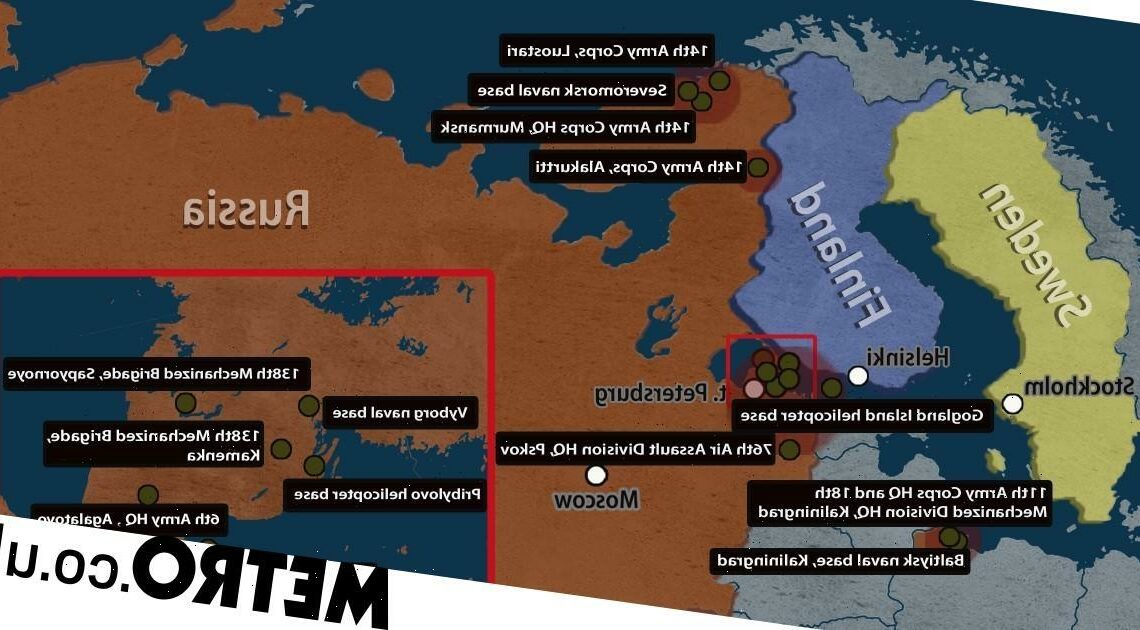 As Sweden and Finland join, map shows how close Putin war machine is to Nato 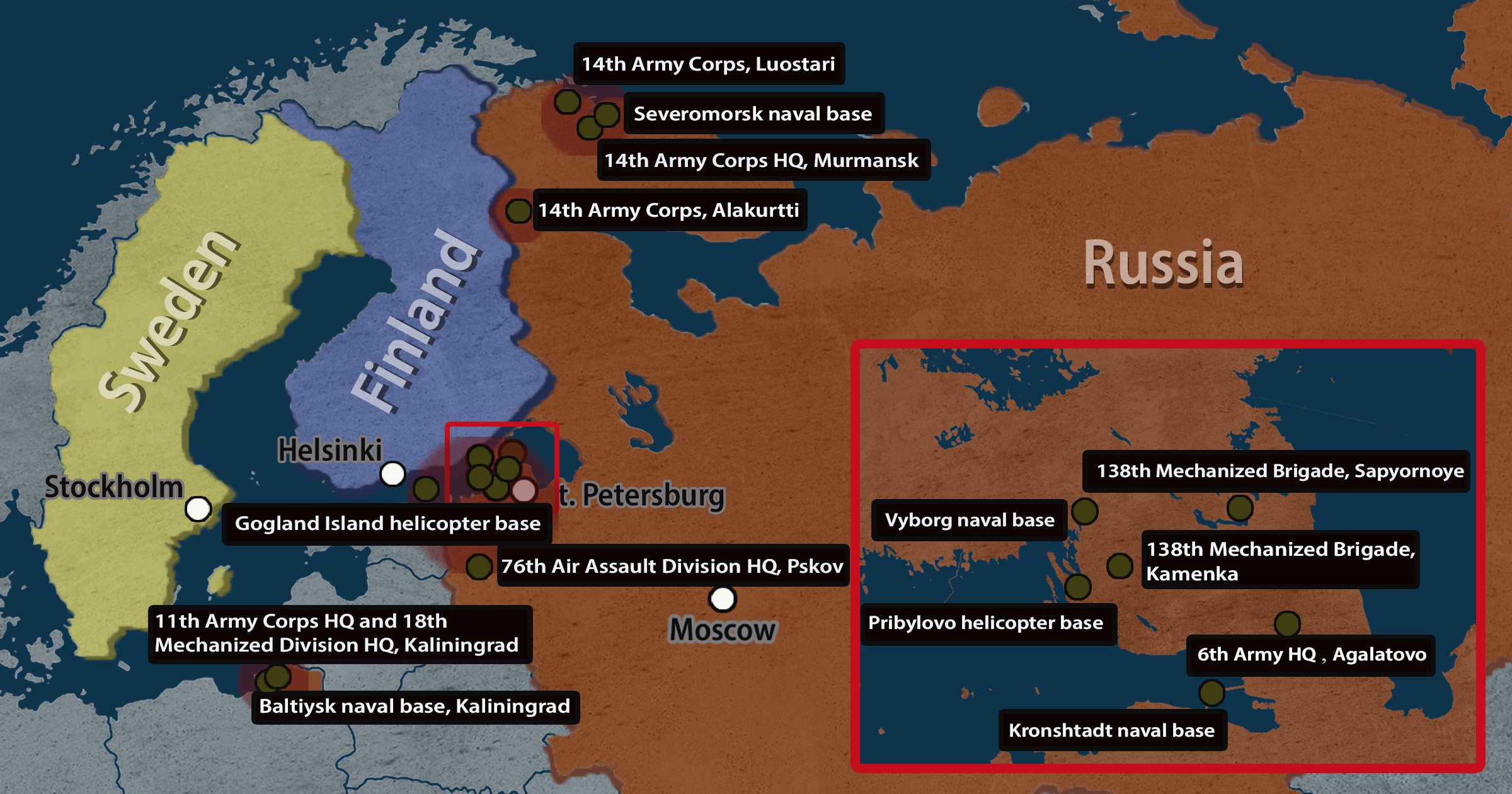 Vladimir Putin’s gamble that invading Ukraine would undermine the unity of Nato appears to have backfired spectacularly.

With a clear and present danger to unite them, member countries of the military alliance are more committed than ever to deeper security ties and the principle of collective defence.

Finland will soon be followed by Sweden in applying for membership, expanding Nato’s footprint across the north of the continent.

But the move also draws into focus a problem which predates the war in Ukraine and will exist long after: the proximity of the Kremlin war machine to European territory.

Russia’s Western flank, which already butts up against Nato at Estonia and Latvia, is heavily fortified.

Soon the alliance’s new outer extremity, extended by 800 miles along the east of Finland, comes to within a stone’s throw of even more of Russia’s vast military.

The Severomorsk naval base, the heart of its northern fleet, now lies just 115 miles from Nato’s border.

From here sleepless submarines equipped with nukes set out on long, silent journeys beneath the water, while destroyers and landing ships are readied for naval assaults.

The 200th Mechanized brigade is based at Luostari – less than 70 miles from Finland – and is currently using its tanks and rocket launchers in Ukraine.

Satellite images reveal it has a Cold War-era airstrip, barracks and rows of armoured vehicles and personnel carriers.

The 61st Naval Infantry Brigade, which has fought in the Donbas and Syria, is based at the Sputnik base just north of it.

It’s a similar story at Alakurtti, another base housing military vehicles and soldiers trained in Arctic warfare, little more than 30 miles from Finland.

Further south, units attached to the 6th Army based near St Petersburg are stationed towards the Finnish border.

Bases at Kamenka and Sapyornoye – both in active use, judging by satellite images – lie within 60 miles of the soon-to-be Nato member.

With Sweden on the brink of joining Finland and applying to join Nato too, the balance of power looks to have tilted dramatically in the struggle for influence over the Black Sea.

The busy shipping route is vital to Russia’s economy, especially for energy exports leaving the ports of St Petersburg.

In 2015, a Ministry of Defence report warned Moscow may seek to ‘sow dissent and attack resolve’ of the countries surrounding the waters.

With Sweden and Finland soon to take the number of countries with shores on the Baltic Sea in Nato from seven to nine out of 10 – the odd one out being Russia – there can be little doubt the alliance has established a dominant position there.

But Russia will continue to use Kaliningrad, its heavily militarised enclave sandwiched between Poland and Lithuania, to ensure it maintains muscle in the region.

The Baltic Sea fleet at the Baltiysk naval base includes a battalion of modern missile-equipped warships, some of which entered service just this year.

In 2019, Russia established a helicopter base on Gogland Island, a tree-covered rock floating in the middle of the Gulf of Finland. It lies a few miles from Finnish waters and 70 miles from Helsinki.

Russia, Sweden and Finland have a complicated history stretching back hundreds of years and which still casts a shadow over relations between the trio.

What is now Finland was once a grand duchy controlled by the Tsar and treated as a buffer state between the Russian Empire and the once-powerful Kingdom of Sweden, which spent decades at war with its neighbour.

Finland gained its independence in 1917 but fell into years of political turmoil and civil war, ultimately leading to the invasion of Soviet forces in 1939.

Much like the attack on Ukraine, the Winter War turned into a bloody, costly slog for Moscow and set Finland on a course that would see it fight both with and against Nazi Germany in the Second World War.

Though Finland managed to retain its independence throughout the 20th century when others on Russia’s doorstep were swallowed by the Soviet Union, it came at a price, cowered into maintaining a small army and allowing the Soviet Navy to lease a base on its territory.

Successive politicians in Helsinki staked out a middle-ground between the West and East during the Cold War, avoiding being forcefully dragged into Russia’s orbit but having to remain one step removed from its European neighbours.

Sweden has pursued a policy of non-alignment for more than 200 years, last being directly involved in a war in 1814.

Both have openly considered applying for membership in recent years and already have some defence cooperation with Nato but the strategic picture and public opinion have been dramatically altered by the Ukraine war.

Russia’s foreign ministry has warned Finland it ‘will be forced to take retaliatory steps, both of a military-technical and other nature, in order to stop threats to its national security arising.’

The UK has signed a defence guarantee with both countries this week, a move designed to offer support and security during their accession.

Can FA Cup final go to extra-time or does it go straight to penalties?