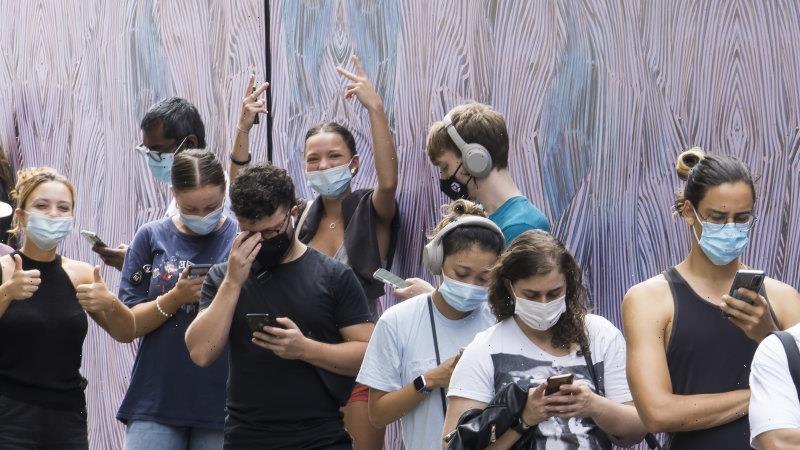 Australia has reported a record-breaking number of daily coronavirus infections, with 9127 cases on Friday, as the nation’s booster program is accelerated to combat the rapid spread the Omicron variant.

The new daily high, more than double the 3797 reported exactly a week ago, comes as restrictions are tightened across multiple states and Health Minister Greg Hunt announced that from January 4 booster jabs will be available four months after a second dose.

About 34,000 people have contracted the virus in NSW in the past two weeks – almost twice the total number of cases reported during Victoria’s second wave – upending holiday plans and forcing tens of thousands into isolation on Christmas Day. 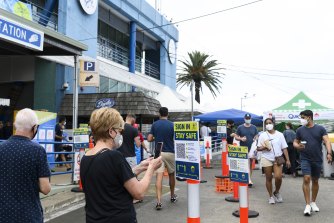 Sydney Fish Markets on Christmas Eve. Due to the rise in COVID-19 cases, fuelled by the Omicron surge, mandatory face mask and QR check-in rules have been reintroduced.Credit:Rhett Wyman

NSW Chief Health Officer Kerry Chant said on Friday that boosters will be “essential in upping our level of protection”, particularly against the Omicron strain.

“Boosters are important, particularly if you’re elderly or have underlying health conditions, but everyone should come forward for their dose when they’re due,” Dr Chant said.

From the end of January, the timeframe will be cut even further, with people eligible for their booster three months after a second shot.

In a statement, the country’s top immunisation advisors, the Australian Technical Advisory Group on Immunisation (ATAGI), said that “booster vaccination alone will not be sufficient to avert a surge due to Omicron”.

“However, maximising booster coverage by expanding eligibility and encouraging high uptake, in combination with enhanced public health and social measures, may prevent a large surge in case numbers, hospitalisations and deaths,” the statement said.

NSW recorded 5612 new cases on Friday, with more than 2000 infections in the Sydney and south-east Sydney local health districts, which stretch from Sutherland to Woollahra.

NSW Premier Dominic Perrottet announced on Thursday the reintroduction of some restrictions, including compulsory mask-wearing indoors and density limits for pubs.

Under the expanded rollout, more than 2.6 million people in NSW will be eligible for a booster in early January. But pharmacists and general practitioners say exhaustion coupled with the Christmas and holiday rush is putting immense pressure on a workforce struggling to keep up with demand.

“Pharmacists are doing their best and bending over backwards because they’re responding to the public, but for community pharmacies this is probably his busiest time of year,” NSW branch president of the Pharmacy Guild David Heffernan said.

Almost 2 million Australians have now had their booster shot (1,984,415), including 148,783 boosters administered on Thursday.

Chief Medical Officer Paul Kelly said that while protection does not completely disappear from the first two doses of the vaccine, it does wane over time.

“But I will stress that just because you get to three months or four months or five months or six months, it doesn’t mean that you immediately just that day lose your protection.

“[But] it does decrease over time. It remains in place for severe infection, but it is diminished for Omicron compared with Delta,” Professor Kelly said.

The federal government this week announced an increase to booster payments for GPs and pharmacists by $10, while also asking states to accelerate their contribution to the booster program by reinstating closed hubs to get to a target of up to 360,000 daily doses administered across the country.

Hospitalisations in NSW increased to 382 on Friday, up from 215 compared with the same time last week. Fifty-three patients are being treated in the state’s intensive care units, an increase from 24 last Friday. But hospital admissions in NSW remain well below the 1266 peak during the height of the state’s Delta wave.

NSW Health reported one death on Friday, a fully vaccinated woman in her 90s from south western Sydney, who died at St George Hospital. She was a resident of the St Basil’s Aged Care facility in Lakemba, where she acquired her infection.

Omicron accounts for about 80 per cent of all cases in NSW, Dr Chant said on Thursday, and roughly one third of COVID-19 infections recorded in the past three weeks have been in people aged in their 20s.

Dr Chant said Omicron is likely to be milder than previous strains, with the risk of hospitalisation being around 60 per cent to 80 per cent lower than Delta.

NSW recorded 164,144 tests in the 24 hours to 8pm on Thursday, the second-highest tally of daily swabs collected during the pandemic. After pre-travel testing swamped the Sydney’s testing clinics this week, NSW Health is asking people to only get swabbed if they have symptoms or are close contacts.

Professor Tony Cunningham, an infectious diseases physician at the Westmead Institute for Medical Research, said it was critical boosters be prioritised for the elderly, people who are immunocompromised and those with underlying health conditions.

“It is the prudent decision to bring forward boosters to four months. Two doses doesn’t protect as well as with three, and, combined with restrictions, should help bottle up Omicron,” Professor Cunningham said.

The Wheel of Time season 2 release date: Will there be another series?