‘It’s not okay to be fat’: Aussie woman sparks debate as she slams beauty magazines for promoting plus-sized models and says the look should NEVER be considered healthy

The woman spoke to Common Ground Convos, a TikTok page that interviews everyday Aussies on the streets of Melbourne, discussing a controversial Cosmopolitan cover featuring a plus-size influencer.

The publication has released similar covers in the past, but the Melbourne woman objected to the normalising of ‘fat people’ and said the magazine was ignoring common health guidelines.

‘I can’t do fat people. Do you want a fat person waddling, they can’t walk because their thighs are so big? It’s not healthy, and it doesn’t look good,’ she told the channel. 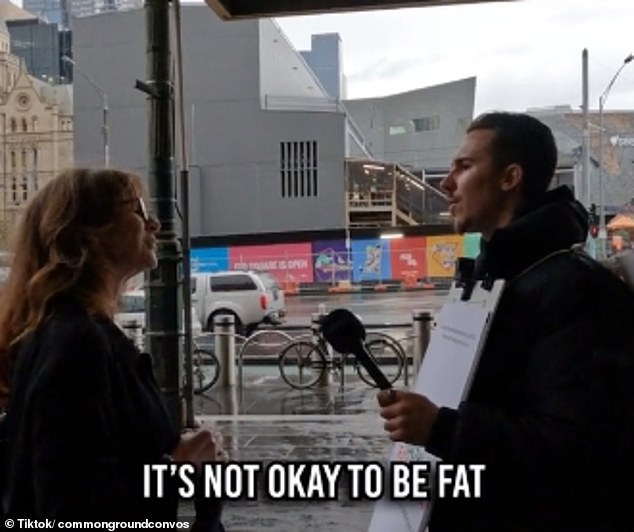 The woman admitted she ‘wasn’t politically correct’, saying ‘it’s not OK to be fat’ and objected to plus-size models continually being used on covers.

‘Would you ever consider that healthy?’ the host asked the woman, before she immediately replied ‘no’.

‘Who you ever consider that beautiful?’ he asked, before she again responded ‘no’.

‘Why are young people being taught beauty is a social construct?’

The Aussie woman offered her own tips for staying slim, with one eyebrow-raising suggestion.

‘Eat healthy, not too much sugar, everything in moderation,’ she said. ‘Apart from sex.’ 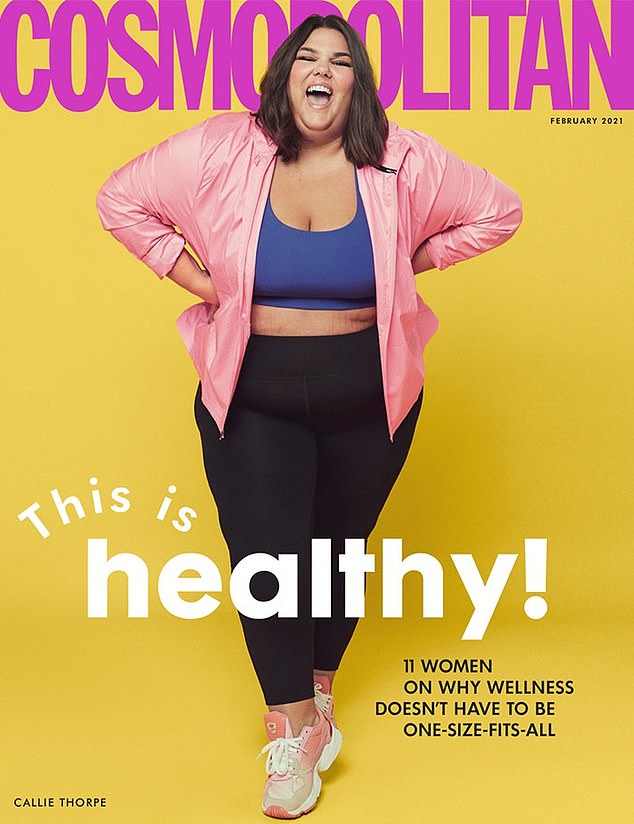 Cosmopolitan’s cover stars of various body shapes showcased across different digital and print editions, accompanied by the headline ‘This is healthy’ 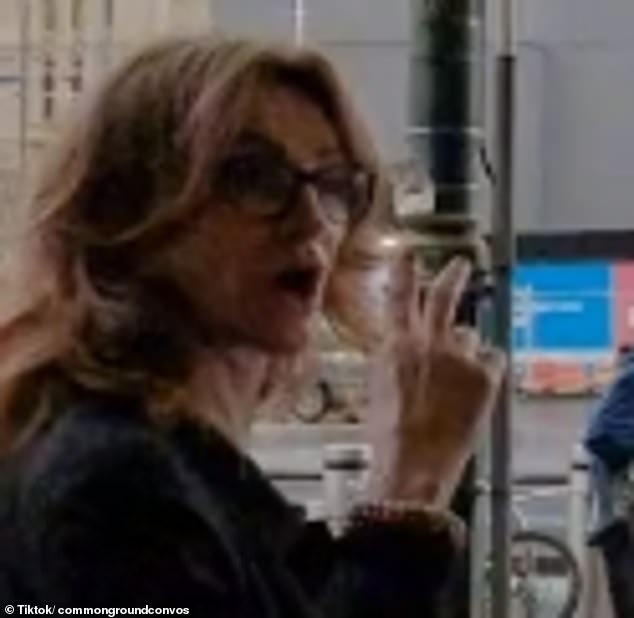 The woman, who admitted she ‘wasn’t politically correct’, saying ‘it’s not OK to be fat’ and objected to plus-size models continually being used on magazine covers

‘In a world that accepts all, I can understand her view. It’s not healthy & shouldn’t be promoted. But people struggle & should be promoted to do better,’ one person replied.

‘FINALLY, someone that said it,’ another said.

Another commented: ‘Pretty HARSH, but 100% agree’.

However, some suggested her comments were misguided, and the magazines weren’t encouraging obesity but instead teaching people not to hate themselves.

‘The body positive movement isn’t telling you that everybody is healthy. It’s saying you don’t have to hate yourself for the body you’re in,’ a woman responded.

In Cosmopolitan’s February 2021 edition, the magazine featured several plus-size models alongside the headline: ‘This is healthy.’

The magazine came under criticism for its message, after a year dominated by coronavirus, with unhealthy or overweight people particularly at risk of the killer illness. 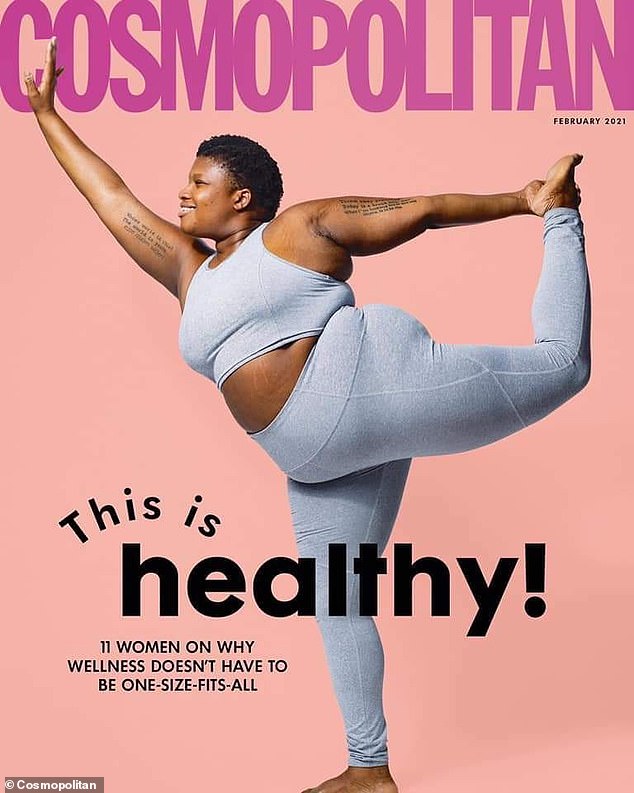 The February 2021 cover stars plus-size women with the tagline ‘This is healthy’ for an edition dedicated to body positivity. Pictured is yoga teacher Jessamyn Stanley on the cover.

At the time, Dr Max Pemberton, a leading UK doctor, said he was horrified when he saw the covers.

‘Being fat is not something people should be mocked or bullied over, and it’s right that we should recognise the diversity in body types,’ he said. 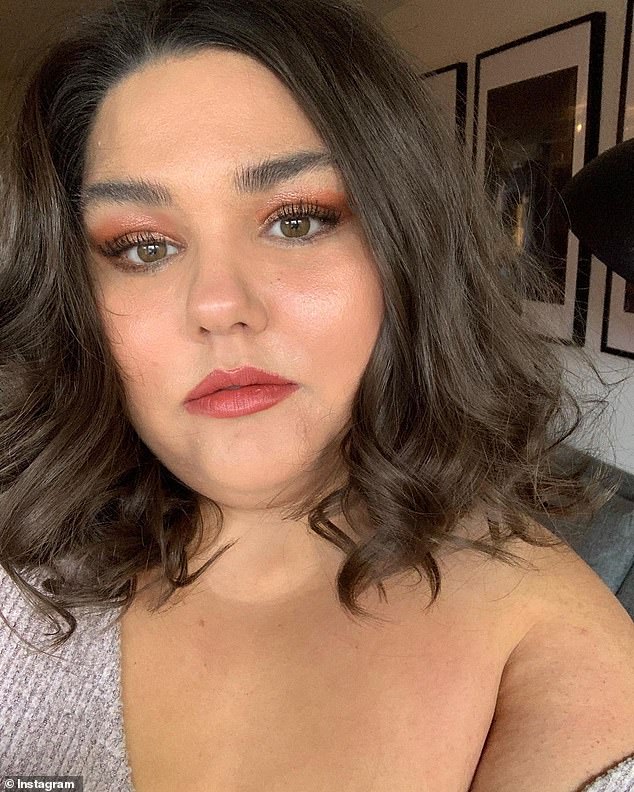 Models featured in the magazine hit back at critics, with Callie Thorpe insisting that ‘health is whatever you want to call it’ 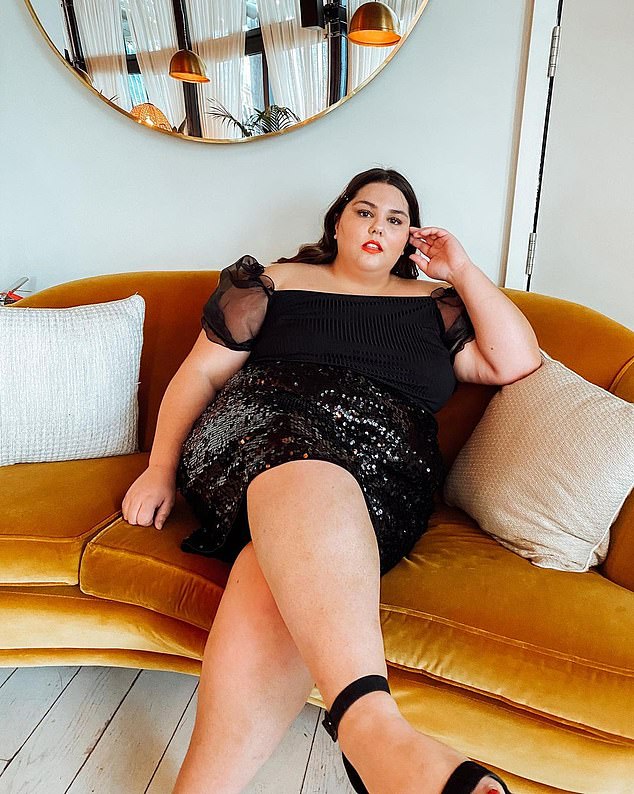 She added: ‘How the only two plus size people featured have come up against such vitriol just made me realise why I wanted to do this in the first place’

‘But, equally, obesity is not something that should be ignored. And it’s certainly not something we should pretend isn’t linked to a shortened life expectancy.’

Piers Morgan also blasted the magazine for being ‘shamefully irresponsible’.

Morgan wrote: ‘No, it’s not [healthy]. And given that obesity is a major factor in why many get severe covid illness, this @CosmopolitanUK cover is shamefully irresponsible.’

Models featured in the magazine hit back, with Callie Thorpe insisting that ‘health is whatever you want to call it’.

She added: ‘How the only two plus size people featured have come up against such vitriol just made me realise why I wanted to do this in the first place.

‘The internet doesn’t feel like a safe space for us.

‘It’s REALLY tough seeing horrible things written about me but honestly it’s more concerning to me that it’s effecting people that look like me. ⁣that they are reading these horrible things and internalising what these bullies are saying. 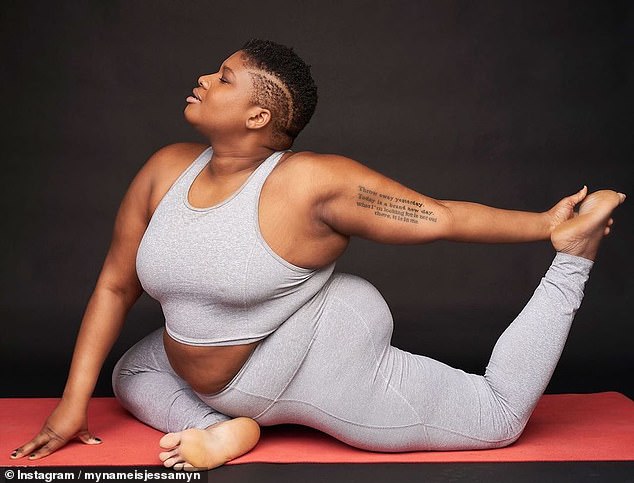 Yoga teacher Jessamyn Stanley wrote: ‘You know you that b**** when you cause all this conversation. Always stay gracious: best revenge is your paper’ 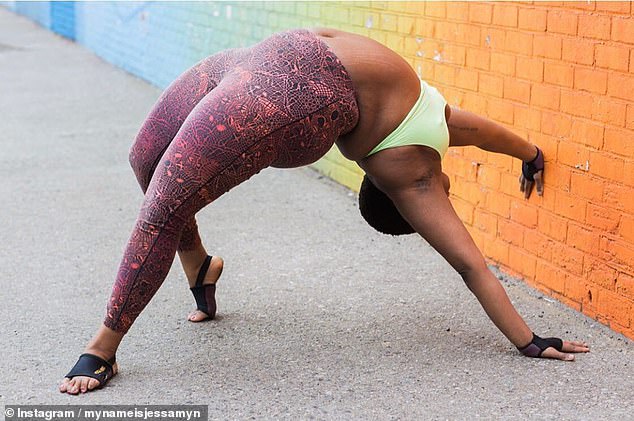 She also added: ‘Thanks for the love on this @cosmopolitanuk cover, y’all.’ She was one 11 women featured

‘And it breaks me that because of bullies they will never see the potential of finding peace, happiness and joy no matter what their body shape.’

Yoga teacher Jessamyn Stanley, who featured on the cover, wrote: ‘You know you that b**** when you cause all this conversation. Always stay gracious: best revenge is your paper.’

Being overweight can raise the risk of severe Covid-19 by 40 per cent, while obese people are 70 per cent more likely to be hospitalised with the disease, according to a study.

Researchers analysed data from more than 300,000 people, 640 of whom ended up in hospital with the coronavirus at the peak of the pandemic.

They found extra weight is linked with ‘higher odds’ of admission to hospital, increasing in line with body mass index (BMI) – a height-to-weight ratio.

Being too thin also raised the risk compared to someone who was a healthy weight, but by a smaller margin of six per cent.

The team, led by University College London, sought to build on previous smaller-scale studies which first shone a light on the link between weight and Covid-19.

Concerns led to an investigation by Public Health England, which said it found overweight people are more than three times as likely to die of Covid-19 than those of a healthy weight.

DR MAX PEMBERTON: I’m sorry, Cosmo, but this is NOT healthy

BY DR MAX PEMBERTON FOR THE DAILY MAIL

Cosmopolitan magazine has been lauded by some as a watershed moment for celebrating the plus-size female body. It features cover stars of various body shapes showcased across different digital and print editions, including some extremely overweight women, accompanied by the line ‘This is healthy’.

Well, I’m sorry to say it, but I was far from impressed when I saw them. Horrified, more like.

Let me be clear: I don’t approve of body shaming. We all come in different shapes and sizes. But in the past few years something strange has happened. Fat has stopped being a description of someone’s body and morphed into an identity.

Being fat is now a choice that should be celebrated, a protected and revered characteristic that deserves respect and deference. Suggesting otherwise — that, for example, being overweight is fundamentally unhealthy and something an individual should try to address — is considered ‘shaming’. 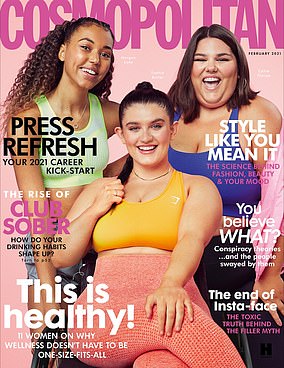 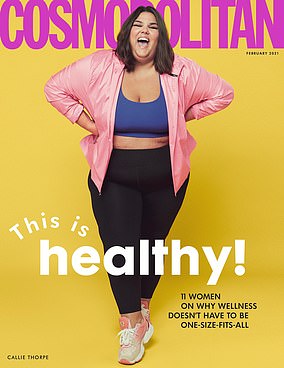 Obesity has been consumed by the twisted identity politics that have taken root in our society, and doctors are now warned against telling patients they are fat in case it offends them.

The body positivity movement has gone from challenging pernicious societal pressures to conform to the ‘perfect’ shape to simply insisting that being fat is healthy.

It seems bizarre that, as dangerous lifestyle choices like smoking become increasingly socially unacceptable, we’re expected to turn a blind eye to the waistlines of our patients. 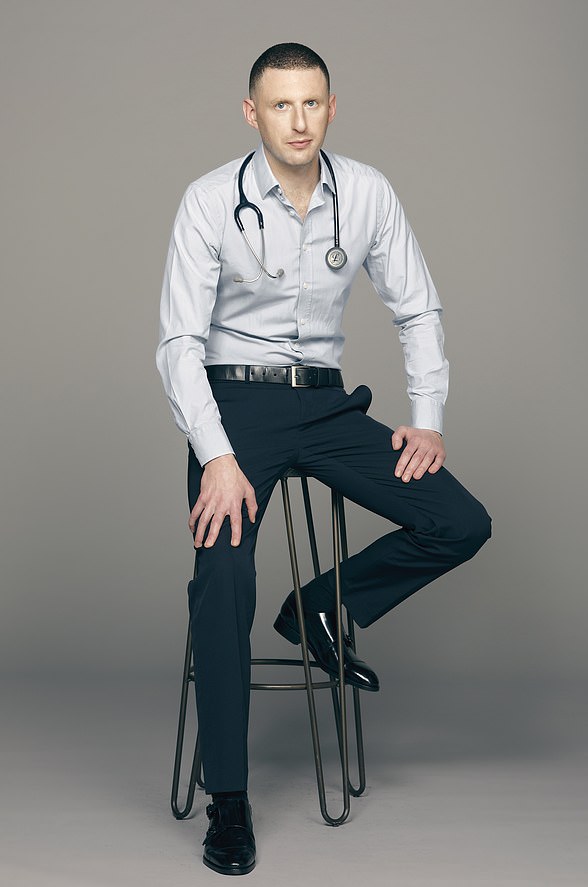 Have we collectively taken leave of our senses? It’s madness that a doctor even needs to state that being overweight is unhealthy.

This doesn’t need a ‘debate’, and it is emphatically not a matter of opinion. It’s a medical fact.

Obesity is linked to a host of conditions and diseases, from cancer and heart disease to strokes. I’m sure this is upsetting for some overweight patients to hear, but it doesn’t make it any less true, and it doesn’t mean that I, and other doctors, don’t have a duty to say it.

I think part of the wariness of criticising obese people comes from America, where overweight people have adopted the language of marginalised minorities such as gay or black communities to deflect criticism. They are now ‘proud’ of their fatness and ‘celebrate’ it.

This ludicrous cult of the obese has spread over the pond and infected us, too.

But hold on, do people really think there is anything to ‘celebrate’ about being so fat you need to wear special clothes and use reinforced ambulances to get to hospital? That there is any reason to be proud of the fact you cannot sit in an airline seat or walk without a stick?

And should you really congratulate yourself that you have eaten so much that the sheer weight of your body is gradually killing you?

Pretending otherwise is not just ludicrous, it encourages people to continue to delude themselves and prevents them from making positive changes.

Allow me to clarify for anyone in any doubt: being fat is not healthy.

Yes, you might be overweight and still go for a jog or do yoga, but that doesn’t mean your body is fighting fit. Fat bodies are not healthy bodies. They are struggling.

In fact, some of Cosmopolitan’s covers seem particularly irresponsible, given they glamorise and celebrate obesity at the very time we are facing a pandemic of a virus that is particularly dangerous for people who are overweight.

Obesity has been an issue for the NHS for years, but this has been brought into sharp focus by Covid-19.

Being overweight can raise the risk of severe Covid-19 by 40 per cent, while obese people are 70 per cent more likely to be hospitalised with the disease, according to a major study last year.

This led to an investigation by Public Health England, which said it found overweight people more than three times as likely to die of Covid-19 than those with a healthy weight.

So, overweight people with the virus are not only more likely to become severely unwell and need admission compared to people of a healthy weight, they are also more likely to die.

Losing weight is the single biggest thing that people can do to reduce their risk of complications or death from this virus.

It is a desperate public health issue.

Doctors and clinicians like me on the front line have been pleading with patients to lose weight, not simply for their long-term health, but because it might be the difference between life and death if they catch Covid.

Yet a leading women’s magazine has decided to ignore this and perpetuate the lie that being overweight can be healthy.