Home » World News » ‘Be proud of what you did’: The words that convinced this Anzac march leader to turn up

‘Be proud of what you did’: The words that convinced this Anzac march leader to turn up

Vietnam veteran Andy Lapins was almost going to give this year’s Anzac Day march a miss.

He couldn’t help but feel slighted by the miserly COVID-safe caps on marchers, especially when tens of thousands of fans would be crowding MCG concourses just hours later. 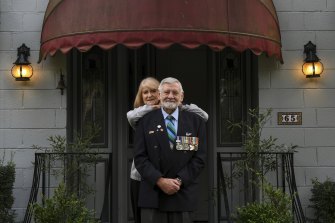 The 79-year-old had lost comrades to a foreign war and years of his youth to post-traumatic stress. Registering online to participate in the annual parade felt more like applying.

Mr Lapins believes such frustrations, taken with nervousness about mass gatherings, may be reasons behind why only 1736 people had signed on to march by Saturday’s noon cutoff from 8000 available places.

“I ummed and ahed with this registration business but my daughters talked me around,” he said. “They said: Dad, be proud of what you did and honour those who lived and those you left behind.”

In that conversation, it all became clear.

Mr Lapins, who served as a helicopter crewman with No.9 Squadron, will not only join the march to the Shrine of Remembrance but lead it (though still behind the politicians) as part of a small band of RAAF veterans and personnel.

“When you look at the concept of what Anzac Day is, it’s to honour those who served this country,” Mr Lapins said.

The 1400 allocations for the dawn service at the Shrine of Remembrance were booked out within a day. However interest in registrations for the march had been tepid.

RSL Victoria chief executive Jamie Twidale said the numbers were “a little bit lower” than expected but he believed many veterans were choosing to commemorate at local venues this year.

“People are a bit skittish about COVID, of course, and it will be interesting to see what numbers of unregistered people turn up,” he said.

People who have not registered online can still attend the march, he said. Volunteers would be on hand to help people manually register or sign in with a QR code.

He also acknowledged there could be an element of protest in the low pre-registration numbers.

Last year’s parade was cancelled entirely because of the pandemic threat and Melburnians were instead encouraged to light candles at dawn in their driveways.

It was almost cancelled for a second year running because of the health risks to the vulnerable veteran community, but the RSL and state government reconsidered parade options amid a public backlash.

In a reminder the COVID-19 threat is far from over; an imported case from Perth on Friday ended Victoria’s 55-day run of zero local transmission.

Having settled on his own decision to attend, Mr Lapins was looking forward to representing RAAF veterans at the head of the march, an honour he couldn’t have imagined when he returned from Vietnam in May 1969 to a politically riven nation and open hostility from anti-war protesters.

“Basically we came home secretly and in civilian clothes so we didn’t stand out like a sore thumb,” he said.

“I was pissed off. I was angry. The anger was there for a long time,” he said.

Mr Lapins’ service in Vietnam included extracting and landing special forces in remote jungle. Other high-risk missions included chemical spraying of enemy crops hidden beneath jungle foliage. Much of his work was rescuing soldiers with horrific injuries and transporting them to US medical aid.

“You find yourself sitting in your car 100 miles from home. You don’t know why you’re there or how you got there … in a paddock with a couple of helpers – a bottle of whisky and some beer,” he said.

After five or six years, he began his mental recovery with counselling.

“You wouldn’t want to go out anywhere, and still a little bit of that exists,” he said.

“The person who suffered was my poor wife. I’m very lucky my dear lady stayed with me.”