Home » Blinken reaffirms US support for Israel, Palestinians during meeting with PM Netanyahu 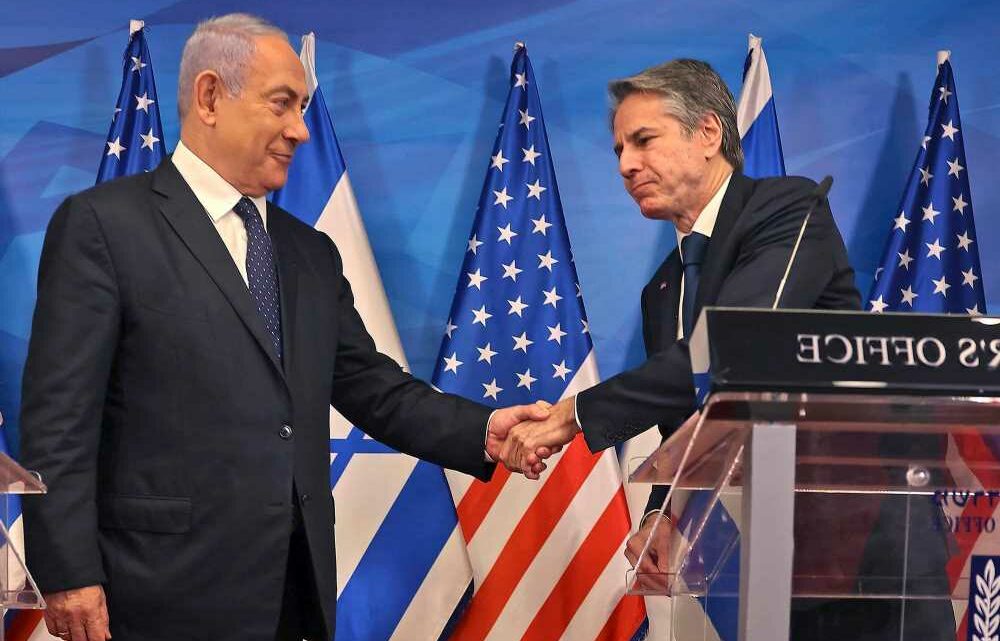 Blinken reaffirms US support for Israel, Palestinians during meeting with PM Netanyahu

Secretary of State Antony Blinken reaffirmed the US’ commitment to Israel’s security during a meeting Tuesday with Prime Minister Benjamin Netanyahu, in which he also said the administration will work to develop “assistance and investment” for Palestinians.

It was the first meeting between the two since last week’s cease-fire brokered by Egypt that ended 11 days of fighting between Israel and Hamas militants.

“We know that to prevent a return to violence, we have to use the space created to address a larger set of underlying issues and challenges, and that begins with tackling the grave humanitarian situation in Gaza and starting to rebuild​,” Blinken said during the meeting with Netanyahu in Jerusalem.

He pointed out that the US will work with international partners to ensure the aid doesn’t benefit Hamas militants. ​

A senior State Department official admitted Monday “there are no guarantees” that millions of dollars being sent by the United States to help Palestinians would not end up in the coffers of the Hamas terror group.

“We’re going to be working in partnership with the United Nations and the Palestinian Authority to kind of channel aid there in a manner that does its best to go to the people of Gaza,” the anonymous official said during a briefing previewing Secretary of State Antony Blinken’s visit to the Middle East this week. “I’m also sure that the Government of Egypt will have some role in that.

“As we’ve seen in life, as we all know in life, there are no guarantees,” the official added, “but we’re going to do everything that we can to ensure that this assistance reaches the people who need it the most.”

Blinken emphasized the need to “expand opportunity” for Palestinians in order to maintain peace with the Jewish state.

“​At the same time, we need to work to expand opportunity for Palestinians in Gaza and in the West Bank, including by strengthening the private sector, expanding trade and investment, and other means.  Assistance and investment like these will help foster a more stable environment that benefits Palestinians and also benefits Israelis​,” Blinken said​.

H​e noted the casualties caused by the fighting – the worst between the Israelis and Hamas in years – and reiterated President Biden’s support for Israel’s right to defend itself against attacks, but ​said both sides have to build on the cease-fire.

Blinken said Biden’s relationship with the Jewish state is personal and has grown over the decades.

“He has been one of Israel’s most steadfast supporters for the last 50 years, having worked closely with every prime minister starting with Golda Meir and now with Prime Minister Netanyahu,” he said.

“As the prime minister mentioned, we had a detailed discussion about Israel’s security needs, including replenishing Iron Dome. We’ll continue to strengthen all aspects of our longstanding partnership. And that includes consulting closely with Israel, as we did today, on the ongoing negotiations in Vienna around a potential return to the Iran nuclear agreement, at the same time as we continue to work together to counter Iran’s destabilizing actions in the region​,” said Blinken.

The US’ top diplomat will travel later Tuesday to the West Bank where he will meet with Palestinian Authority President Mahmoud Abbas and then head on to Egypt and Jordan before concluding his Middle East visit on Thursday.

Netanyahu thanked the US for its ​allegiance to Israel and its security, but expressed hope that the Biden administration would not follow through with a return to the Iran nuclear deal.

“We discussed many regional issues, but none is greater than Iran​,” Netanyahu said.

“And I can tell you that I hope that the United States will not go back to the old JCPOA because we believe that that deal paves the way for Iran to have an arsenal of nuclear weapons with international legitimacy​.​ We also reiterated that whatever happens, Israel will always reserve the right to defend itself against a regime committed to our destruction, committed to getting the weapons of mass destruction for that end​,” he said, referring to the accord’s formal title: the Joint ​Comprehensive Plan of Action.​

The Biden White House ​has entered negotiations with the deal’s remaining partners to re-enter the pact brokered by the Obama administration and signed in 2015.

But former President Donald Trump withdrew the US from the deal in May 2018 and renewed all US sanctions that had been lifted from Iran as part of the pact.

Netanyahu also warned Hamas not to violate the cease-fire.

“We too will give meaning to our commitment to our self-defense. If Hamas breaks the calm and attacks Israel, our response will be very powerful. And we have discussed ways of how to work together to prevent Hamas rearmament with weapons and means of aggression,” the Jewish leader said. ​​