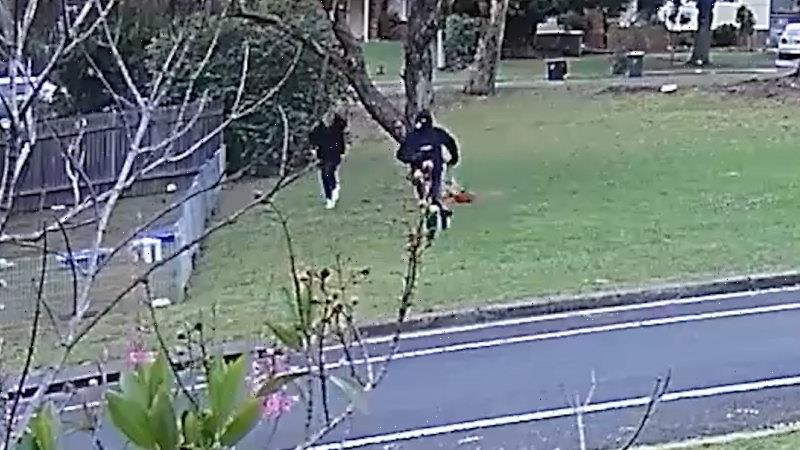 Police are on the hunt for a blond man seen fleeing the scene of a gangland killing last year, whose distinctive hair was revealed when his hoodie slipped off his head.

Police believe last year’s shootings of underworld figures Mejid Hamzy, 44, and Fares Abounader, 39, may be connected and have released footage linked to their deaths. 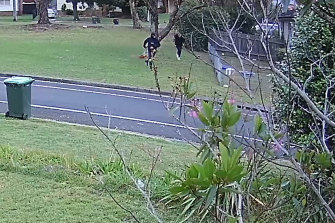 Two men seen fleeing the scene of the shooting of Mejid Hamzy.Credit:NSW Police

It shows two men running from the scene of the murder of Hamzy in Condell Park last year before one of the men’s face and hair are briefly exposed.

Abounader, a former Comanchero bikie, was gunned down just before midnight on August 29 last year on Wall Avenue at Panania.

In a separate incident, in Condell Park about 7.30am on October 19, Hamzy, the younger brother of one of the state’s most dangerous criminals, Bassam Hamzy, was shot and killed outside his home.

Detectives from the state crime command are investigating both murders under Strike Force Manifold and Strike Force Courier. 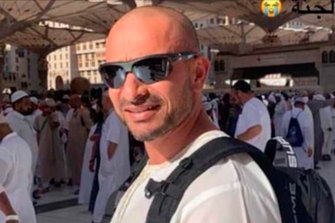 Mejid Hamzy was killed in what police say was a targeted and planned shooting.Credit:Nine News

Dashcam vision from Panania shows a white Subaru parked outside the Wall Avenue home, before the shooting murder of Abounader. The same vehicle is then captured on CCTV turning onto Horsley Road.

In relation to the murder of Hamzy, dashcam vision from Henry Lawson Drive – near Webster Street and Kelso Park – at East Hills, captures two men in dark-coloured clothing in the hours before he was shot dead.

CCTV vision then captures two men running through Colechin Reserve at Yagoona just after the murder.

As one of the men flees, his hood falls from his head, revealing his face and distinctive blond hair. The two men then leave the area in two luxury cars.

Detectives believe these are the same two men seen in the dashcam vision from Henry Lawson Drive and believe someone may have information about their identities.

Detective Superintendent Grant Taylor said officers from across the two investigations believe the two shootings may be linked.

“Of note are locations of the sightings of the men on Henry Lawson Drive and the vehicle in Horsley Road. These locations are close in proximity to one another, being only several hundred metres apart,” he said.

“The vision we have gathered indicates the offenders have reason to be there, that they know the area, or that they live or frequent the location.

“There are further similarities in the way these murders were committed – both execution-style, where the offenders waited inside nearby vehicles for their targets, before fleeing in getaway cars.”

Superintendent Taylor said there were people with vital details about the murders who had not yet come forward with the information.

“Both these murders were calculated, deliberate and brazen attacks, and in the case of Mr Abounader, occurred in front of his family members, who are still seeking answers more than a year since his death,” he said.

“As our investigations deepen, we urge the community to take a close look at the individuals and vehicles depicted in the CCTV vision.”

Two brothers allegedly linked to the rival Alameddine family network have been arrested over the fatal shooting of Hamzy last year, which police believe is linked to a violent gangland feud.

Those accused of pulling the trigger are still believed to be at large.