Boris Johnson scolded but spared over ‘cash for curtains’ scandal

London: Prime Minister Boris Johnson suffered a stinging rebuke from his ethics adviser Thursday over the costly refurbishment of his Downing Street apartment, after the British leader blamed a change of mobile phones for his failure to disclose messages about the makeover.

In a polite but scathing letter to Johnson, Christopher Geidt, who advises Johnson on ethics in public life, said it was “plainly unsatisfactory” that he was not told of text messages in which Johnson petitioned a prominent Conservative Party donor to arrange financing for the makeover of his apartment. 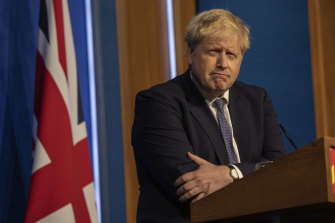 While Boris Johnson faced no official sanction over the decorations affair, his ethics advisor said public confidence in the British government had been put at risk by the “evident failure” to live up to standards. Credit:Getty

While Geidt said the missing messages did not change his earlier judgment that Johnson had not violated the ethics code governing his office, he expressed deep disappointment in the prime minister and said the case could undermine public confidence in high public officials.

For Johnson, the decision spares him the prospect of losing his job because of a breach of the ministerial code. But Geidt’s harsh words add to the perception of a Prime Minister who has been clouded by ethics questions since the beginning of his tenure.

“I believe this episode demonstrated insufficient regard or respect for the role of Independent Adviser,” Geidt wrote in the five-page letter that included the messages between Johnson and the Conservative donor, David Brownlow, in which the Prime Minister asked him about financing the refurbishment of the Downing Street apartment.

Efforts to reclaim the public’s confidence in cabinet ministers, Geidt said, had “been placed at risk by the evident failure to meet the very highest standards of disclosure expected in this present case.”

Johnson offered a “humble and sincere apology,” insisting he had forgotten about the exchange with Brownlow after he was issued a new mobile phone and could no longer access his old device. But he welcomed the news that Geidt had not revised his central judgment that there was no direct conflict of interest.

Opposition leaders seized on the letter as proof that Johnson had not been truthful and as evidence of a pattern of corrupt behaviour.

“Once again, by attempting to hide the truth, Boris Johnson undermines his own office,” the deputy leader of the Labour Party, Angela Rayner, said in a statement. “The Prime Minister’s pathetic excuses will fool no one, and this is just the latest in a long line of sorry episodes.”

Johnson faces another looming test from an inquiry into reports that aides in Downing Street held Christmas parties in 2020 at a time when such gatherings were banned under coronavirus restrictions. The so-called “sleaze factor” has eroded Johnson’s poll numbers, frayed his ties with his party’s backbenchers and raised questions about whether he might face an internal leadership challenge.

Geidt’s investigation grew out of news reports about Johnson’s lavish makeover of his quarters in Downing Street — a project overseen by his wife, Carrie Johnson, who recruited a high-end interior decorator, Lulu Lytle.

The bill for the work, which included designer wallpaper and furniture, was initially picked up by Brownlow, who contributed £52,801 ($99,734). The Prime Minister later repaid the money, but the use of political donations to supplement his public budget for decoration raised questions about whether he had violated ethics rules.

Downing Street maintained that when Johnson was discussing the refurbishment with Brownlow, he believed the donor was administering a blind trust that had been set up to collect funds to finance the project. But the WhatsApp messages, dating from November 2020, paint a somewhat different picture.

Johnson told Brownlow that “parts of our flat are still a bit of a tip” and asked him for help in enabling Lytle to begin work. Brownlow replied that the trust to pay for the refurbishment had not yet been set up. But he added, “It’s only me and I know where the £ will come from.”

“As soon as Lulu calls,” Brownlow promised, “we can crack on.”

The disclosure of the text messages, which came in a separate investigation by Britain’s Electoral Commission, initially prompted speculation that an aggrieved Geidt might resign his post as Johnson’s in-house ethics adviser.

A military scholar who once served in army intelligence, Geidt was private secretary to Queen Elizabeth II from 2007 to 2017. He was forced out of Buckingham Palace in a power struggle with Prince Charles and Prince Andrew over his effort to keep control of the royal family centralised in the queen’s office.

But Geidt won admirers for his diplomacy during that period. After a general election in 2010 failed to produce a decisive winner, he helped broker negotiations between David Cameron and Nick Clegg that resulted in a coalition government between their parties, the Conservatives and Liberal Democrats.