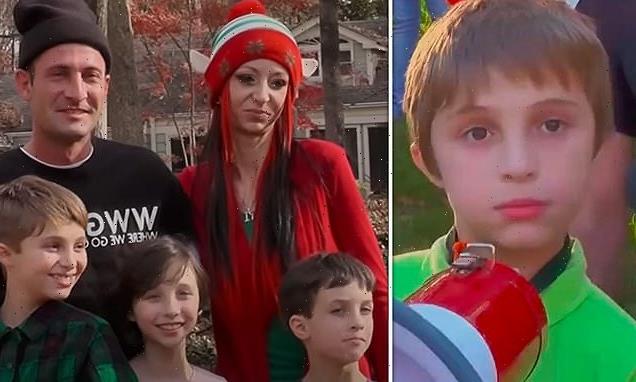 A young boy a QAnon rally was recorded shouting conspiracy theory, such as ‘Biden is a child molester,’ in a new HBO documentary that follows Trump’s supporters before the Capitol riot.

A young boy named Jaden, whose last name was not released, was seen standing next to his father Brandon at the protest as filmmaker Andrew Callaghan captured the moment.

‘Biden’s a child molester and he kidnaps children and does horrible things to them just like Hillary Clinton and Obama who made the virus,’ Jaden screamed in the documentary, This Place Rules, trailer.

‘The virus is man-made it doesn’t exist, kids need to be put back in school,’ he continued. 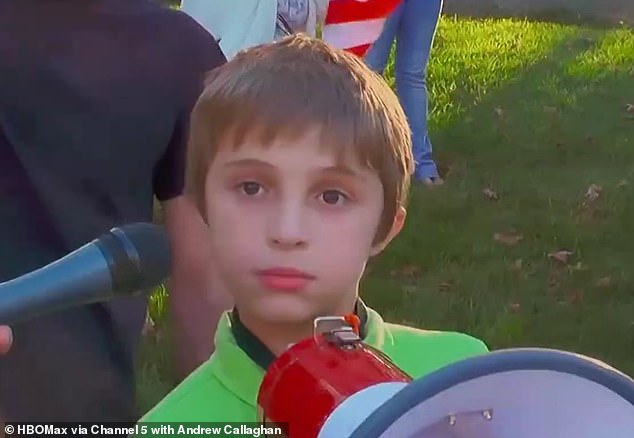 A young boy named, Jaden (pictured), whose last name was not released, claimed that ‘Biden’s a child molester and he kidnaps children and does horrible things to them just like Hillary Clinton and Obama who made the virus’ in a documentary trailer for This Place Rules 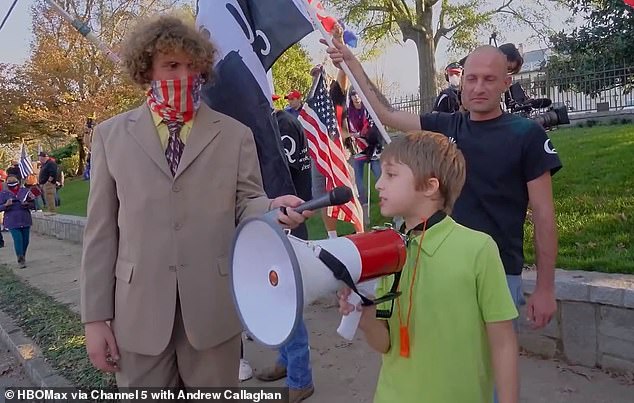 Jaden (lower right) was seen standing next to his father Brandon (right) at a QAnon rally while filmmaker Andrew Callaghan (left) captured the moment. The documentary follows Trump supporters leading up the January 6 riot

QAnon is a movement known for advocating a far-right conspiracy theory alleging a secret, ‘deep state’ plot against President Trump and his supporters.

The documentary takes a deep dive into Trump’s supporters leading up to the January 6 riot, which the Select House committee has recently recommended the former president be charged with three crimes.

In a separate interview, inside his family home, Jaden went on to say that the ‘the people who are pulling the strings is the Italian Vatican,’ who have ‘reptilian bloodlines from another planet.’

‘They’re basically robots and the evil people that are there, such as the Rothschilds, who suck the blood out of children to get adrenal clone and stay young and beautiful forever,’ he told Callaghan.

‘They pick them up and they take them to a submarine and go underground until they can get to Epstein Island which is where they molest children.’

The child, who said he has no friends at school, was often seen playing with toy guns and violent video games throughout his interviews and often frequents a QAnon website. 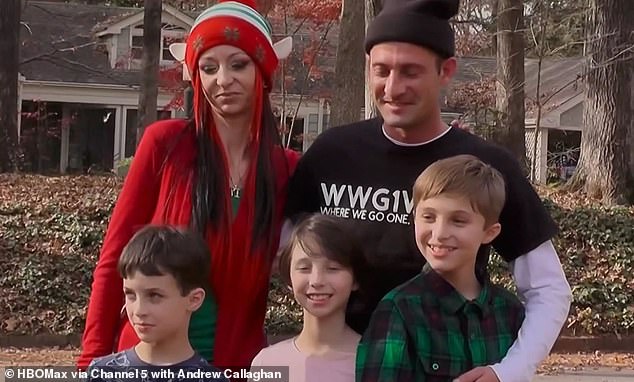 The family-of-five (pictured) follow QAnon and Brandon (black t-shirt) introduced a Q-board to his son Jaden, where the boy claims he gets his information, such as the Vatican is made up of a ‘reptilian bloodlines’ 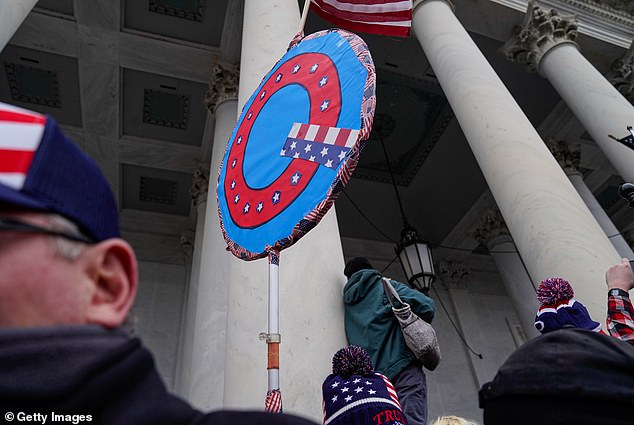 The QAnon symbol was seen at the January 6 riot (pictured)

‘Some people say that there’s going to be a blackout. No television, except for Donald J. Trump screening on live news and what he’s going to do is he’s going to lock up all the other pedophiles and reptilian bloodlines and put them in jail,’ Jaden said he learned from the ‘dark stream media’ website.

Outside of the ‘dark stream media,’ Jaden told Callaghan another ‘good place to check is the Trump media, which is actually telling all the truth.’

On the QAnon board, Brandon showed Callaghan some of the post and said it is often ‘cryptic’ and needs to be deciphered.

‘You have to understand that he speaks and cryptic code. There’s actually a Q-clock that you have to decipher all this stuff from,’ Brandon told the filmmaker. ‘The purpose of the movement is to is to question everything.’

A part of questioning everything, includes the Chipotle pepper logo, according to Brandon, who claims the innermost swirl ends in an upside triangle that symbolizes the ‘sign of a boy lover.’

Brandon and his wife, who was not named, have also pulled their children from school due to mask mandates. It is unclear if they have since returned to school as mandates have been lifted.

‘I don’t want my kids wearing masks,’ the mother-of-three said, despite her children telling Callaghan that they ‘very much’ miss school. 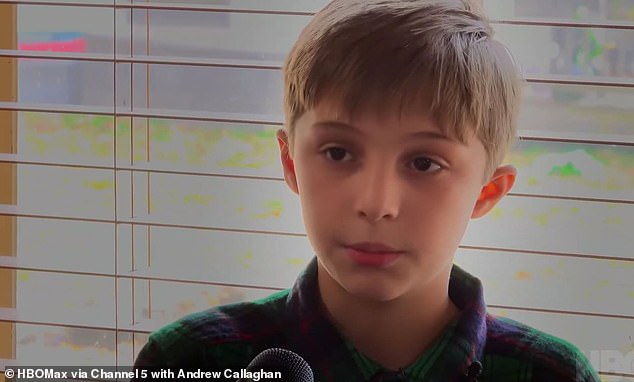 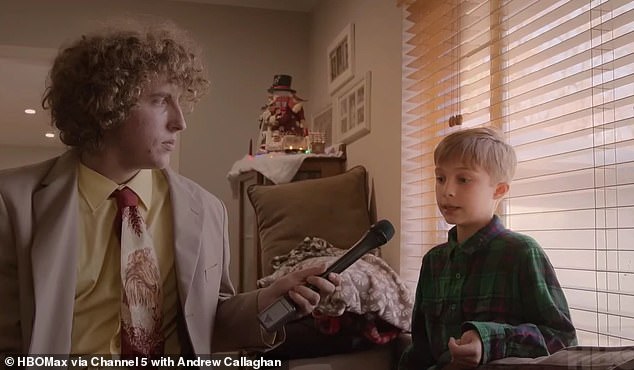 Jaden also claimed that he has no friends at school, but misses it ‘very much.’ His parents had removed their children from school due to mask mandates, and it is unclear if they have since returned to school

Jaden little sister, who was not named, said their mother had decided not to home school them full-time because she didn’t want them to be isolated from their friends, to which Jaden say he didn’t have any and his sister said she had ‘one or two.’

‘You have us, at least,’ his sister, who claims McDonald’s food is made of ‘ground-up children,’ said.

‘It’s sad that they don’t have a lot of friends to play with, but I think in the long run they’ll be better adults having a better education than being popular,’ the mother said.

QAnon, among seven other far-right groups, were seen at the January 6 riot.

Their symbol is a simply a Q and was common among the thousands of Trump supporters present.

QAnon’s conspiracy theory has moved more into the mainstream in recent years as the president retweeted its claims and backed people who believe in it while they were running for office.

The conspiracy alleges that Trump is leading a secret war against the so-called Deep State which includes many political, business and Hollywood elites.

It pushes the theory that the elites worship Satan, abuse and murder children, and engage in cannibalism.

There has yet to be any conclusive proof of these claims, initially made by an anonymous poster called Q on the 4chan website.

Other groups at the riot included the Oath Keepers and Proud Boys, whose members and leaders faced several charges for the riot.