Rio de Janeiro: At least 25 people were killed in a police raid on Thursday morning in what police and researchers are calling one of the deadliest police shootings in the history of this notoriously violent oceanside metropolis.

Shortly after dawn, police entered the sprawling favela called Jacarezinho early on Thursday morning, sending in bulletproof helicopters, armoured vehicles and dozens of heavily armed police officers to do battle in one of the strongholds of the powerful criminal gang, the Red Command. Police said the criminal group had been enticing children into its ranks. 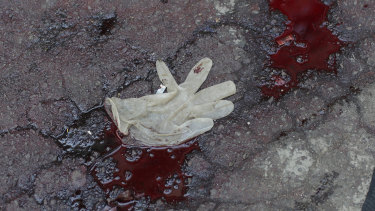 Blood covers a street after a police operation targeting drug traffickers in the Jacarezinho favela of Rio de Janeiro, Brazil.Credit:AP

The conflict dragged on for hours as residents huddled inside their homes, unable to leave. Images showed blood splashed across alleys and households, a room piled with bodies, and people scurrying across rooftops clutching rifles as black-clad police moved into the vast warren of squat brick houses.

By early afternoon, 25 people had been killed, including one police officer.

Even in a city long accustomed to extraordinary police violence, where authorities frequently wage warlike operations inside neighbourhoods under the control of criminal organisations, the death toll was shocking, showing the enduring grip of violence on Latin America’s largest country.

“Really grim moment in Brazil,” said Robert Muggah, co-founder of the Igarapé Institute, a Rio-based think tank that tracks trends in violence. “These shootings are obviously routine in Rio de Janeiro, but this is unprecedented, in that it’s the operation that has generated the largest number of deaths, ever.” 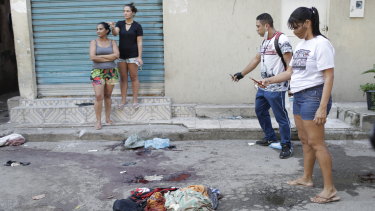 Residents take pictures of blood on the street after the shoot-out in the Jacarezinho favela.Credit:AP

He called it a “dangerous reminder of the persistence of police violence in Rio de Janeiro and Brazil.”

In a statement published to social media, police mourned the death of the officer, Andre Leonardo de Mello Frias. Police said the operation was launched based on “concrete intelligence information.”

“The criminals reacted forcefully,” police said in a statement. “Not only to flee, but with intent to kill. Unfortunately, the warlike scenario imposed by these criminal groups proved the importance of these operations so that they don’t grow stronger.”

Police violence and crime has in recent years been one of Brazil’s most polarising political discussions. Police forces kill thousands of Brazilians every year, most black and poor. In 2019, police killed about 5800 people. 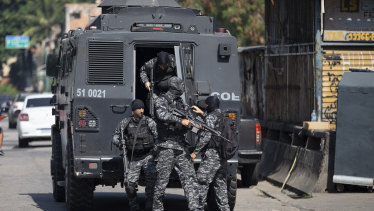 Police get out of an armored vehicle during an operation against alleged drug traffickers in the Jacarezinho favela of Rio de Janeiro, Brazil.Credit:AP

The violent operations have been encouraged by a cadre of political leaders who have won recent elections running on a message that warlike tactics are necessary to curb crime and regain control of territories lost to gangs. “A cop who doesn’t kill isn’t a cop,” President Jair Bolsonaro once said.

This week’s killings left many in the country shocked and outraged on Thursday. 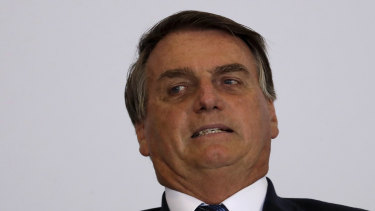 Some questioned whether police were flouting a court ruling last year that forbade them from storming favelas during the pandemic unless under “absolutely exceptional” circumstances.

Others said the brief respite in police violence that held in the early months of the pandemic was largely over. Some called it a large-scale execution.

“In this badly planned operation a police officer was killed,” said Silvia Ramos, a social scientist at University Candido Mendes. “And this operation became one of revenge. And police simply killed more than 20 people.”

Renata Souza, a state representative raised in Complexo da Maré, a dangerous and large favela frequently targeted by police, called the liberalisation of police violence a “policy of death.”

“Security police should be about justice and not vengeance,” she tweeted Thursday. “The governor of Rio is following in the steps of the president and is making genocide a state policy.”