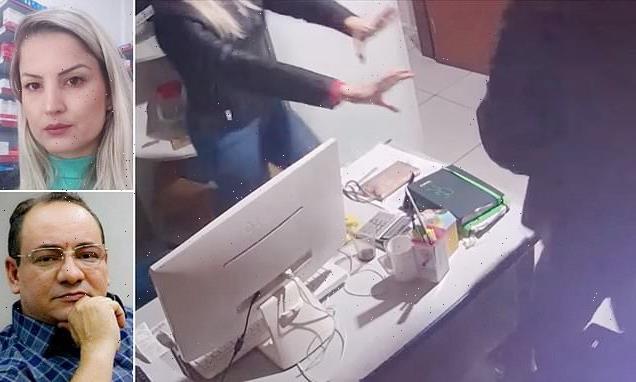 Brazilian journalist tried to execute ex-gal before he killed himself

Shocking moment jilted Brazilian journalist, 46, pulls out his gun and chases his ex-girlfriend, 33, before shooting her three times and turning the gun on himself

Surveillance cameras captured the moment a journalist chased his former girlfriend into her pharmacy’s office in Brazil and opened fire because he was unhappy with the way their relationship had ended.

José Marcondes, 46, shot Nadia Vilela, 33, three times before he shot himself in the head in Tangará de Serra, Mato Grosso, on Monday afternoon.

Marcondes was rushed to a local hospital where he died following surgery. Vilela survived the attempted execution and is currently in a stable condition in hospital.

On Wednesday, the online newspaper that Marcondes founded, Muvuca do Popular, slammed his ‘cowardice’ adding that ‘for all his kindness and warmth to those around him, his outsized jealousy did not stop him from trying against his ex-partner’s life.’

The couple had dated for just a month before Vilela broke it off it April. Marcondes had reportedly visited her at the pharmacy she worked at on Monday with the hopes of rekindling their relationship.

Local media outlets reported that Marcondes stood outside the pharmacy waiting for a customer to leave.

Security cameras show him entering the drugstore and speaking to Vilela, before he stepped around the counter went into her office. 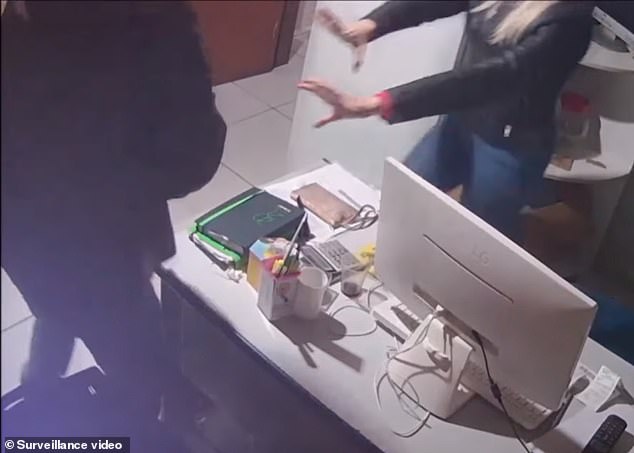 Nadia Vilela, the owner of a pharmacy in Mato Grosso, Brazil, gestures as her ex-boyfriend journalist, José Marcondes, pulled out a gun moments before he shot her three times and then shot himself in the head Monday afternoon. Marcondes, who founded online news portal Movuca do Popular, was upset that she did not want to resume their relationship, which ended two months ago after they dated for a month. He was rushed to a local hospital and underwent surgery but died. Vilela has had two operation and is listed in stable condition 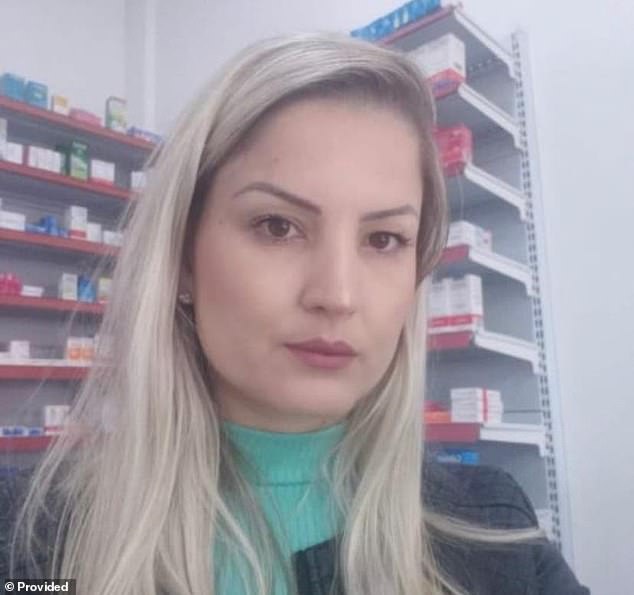 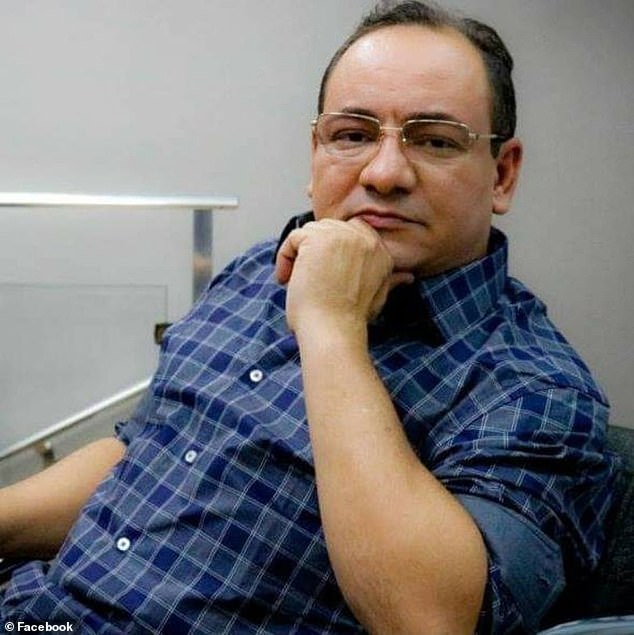 José Marcondes founded online news portal Muvuca do Popular and also dabbled in politics. His registration to run for governor of Mato Grosso was rejected by the Superior Electoral Court in 2014. He did appear as a write-in candidate and received only 0.1% of the vote. In 2020, Marcondes ran for councilman in Cuiabá under the Liberal Party ticket and only got 223 votes

He took a seat at her desk and the pair appeared to argue before the 46-year-old journalist brandished his weapon, sending the pharmacist running for her life.

Vilela could be seen crawling through the pharmacy before a female pedestrian helped her off the ground in front of the entrance. The wounded woman the approached a man who had just parked his vehicle across the street from the pharmacy and rushed her to  Santa Angela Hospital.

Meanwhile, Marcondes shot himself in the head.

He was taken to Hospital das Clínicas where he was intubated due to the loss of brain mass, but died after undergoing surgery almost six hours after the shooting.

Vilela, who has a 10-year-old boy, underwent mouth and chest surgeries as a result of her wounds.

She remains hospitalized at Santa Angela Hospital and as of Tuesday was listed in stable condition. 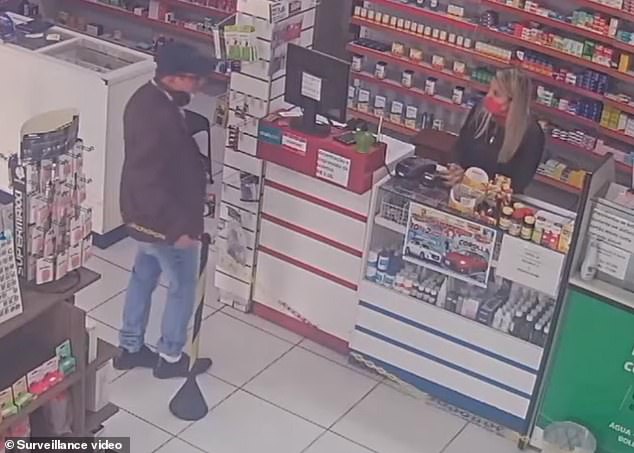 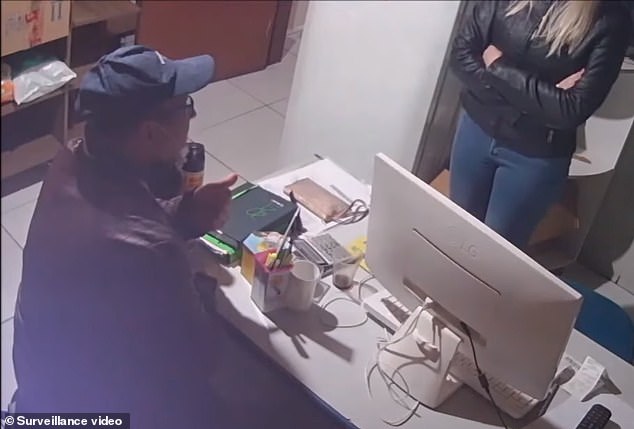 José Marcondes was seeking a second chance from Nadia Vilela after she ended their relationship two months ago. The pair dated for a month

According to the Mato Grosso Civil Police, Marcondes and Vilela had dated for a month before she ended the relationship about two months ago. However, Marcondes insisted that they resume their relationship.

Those close to Vilela recommended she seek an order of protection, but she never went to the police because she did not think Marcondes would harm her.

His registration to run for governor of Mato Grosso was rejected by the Superior Electoral Court in 2014. He did appear as a write-in candidate and received only 0.1% of the vote.

In 2020, Marcondes ran for councilman in Cuiabá under the Liberal Party ticket and only got 223 votes. 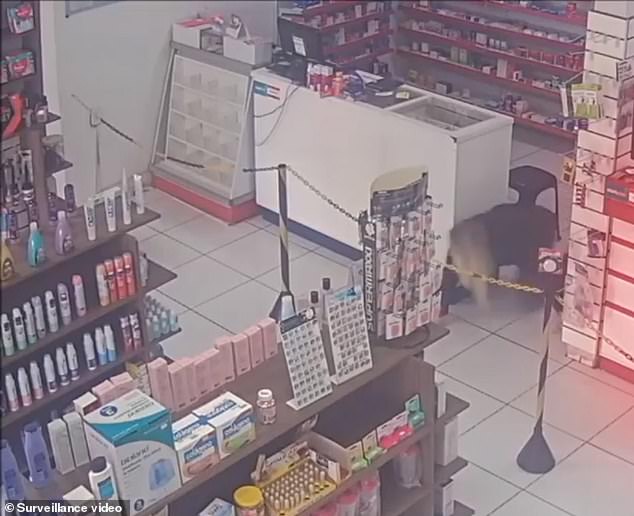 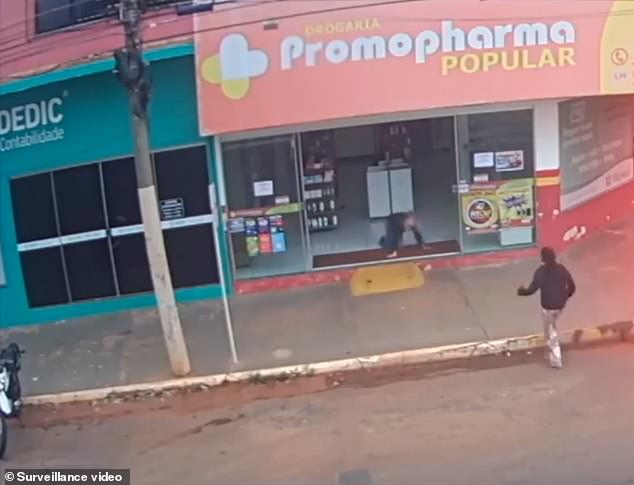 Nadia Vilela crawls out of her pharmacy in Mato Grosso, Brazil, on Monday moments after she was shot by her ex-boyfriend 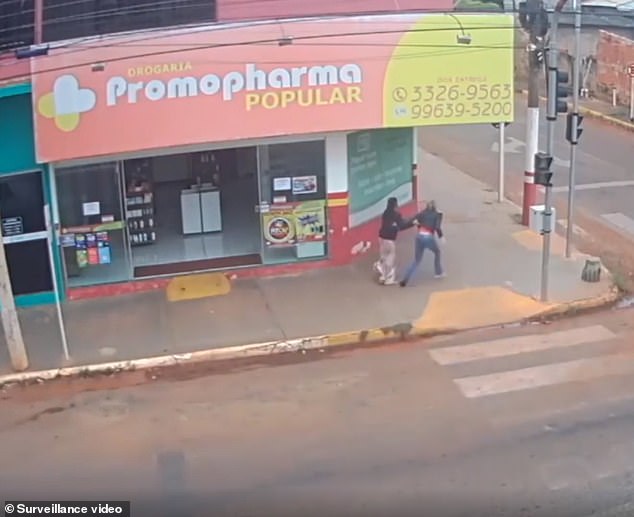 Online news portal Muvuca do Popular sought to distance itself from him.

‘The newsroom of Muvuca do Popular, composed mainly of women, was surprised with a fateful news. The site’s founder, José Marcondes Neto, popularly known as “Muvuca” carried out an act of cowardice by committing an attempt at femicide against his ex-girlfriend, Nádia Mendes Vilela, where the communicator fired four shots at the pharmacist and then shot at himself,’ the outlet said via a Facebook statement which was signed off by seven female staffers.

‘For all his kindness and warmth to those around him, his outsized jealousy did not stop him from trying against his ex-partner’s life. Well, that’s how violence against women works.’

The Truth About Joseline Hernandezs Relationship With Balistic Beats