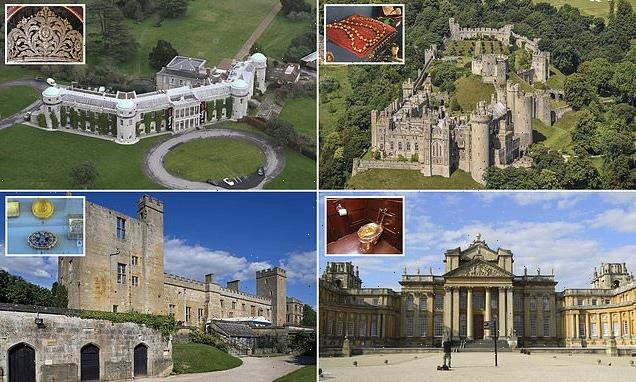 The theft of rosary beads belonging to Mary Queen of Scots from Arundel Castle is just the latest raid on some of the country’s most famous estates in recent years.

A manhunt is underway after the rosary beads were stolen along with other valuable items from Arundel Castle, in West Sussex, in the latest crime to target historic estates.

Two security guards were on duty on Friday night when the gang broke in through a window and forced open a display cabinet, seizing the gold beads and other royal treasures, including coronation cups spanning several centuries.

Police suspect the theft was carried out with inside knowledge as the raiders appeared to know how to avoid detection by CCTV cameras.

Detectives believe the criminals must have conspired with someone who has detailed information about the historic property.

An alarm went off at 10.30pm and when police arrived minutes later they found a getaway car on fire nearby.

The raid came just days after the castle reopened to the public following the relaxation of pandemic restrictions.

The rosary beads, which were carried by Roman Catholic Mary to her execution in 1587, were among stolen gold and silver items said to be worth more than £1million. 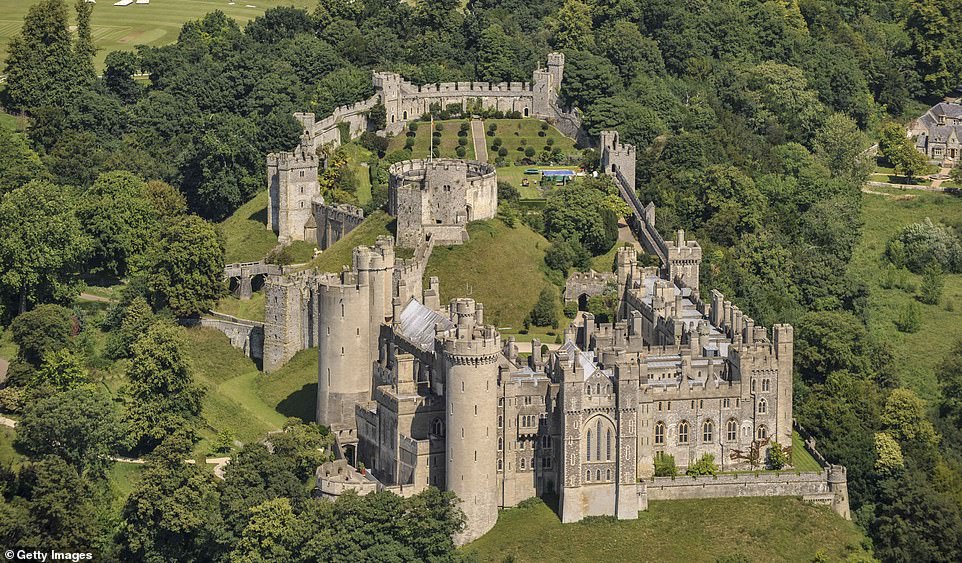 Pictured: A Sussex Police spokesman said the rosary beads are of little value as metal, but of huge significance 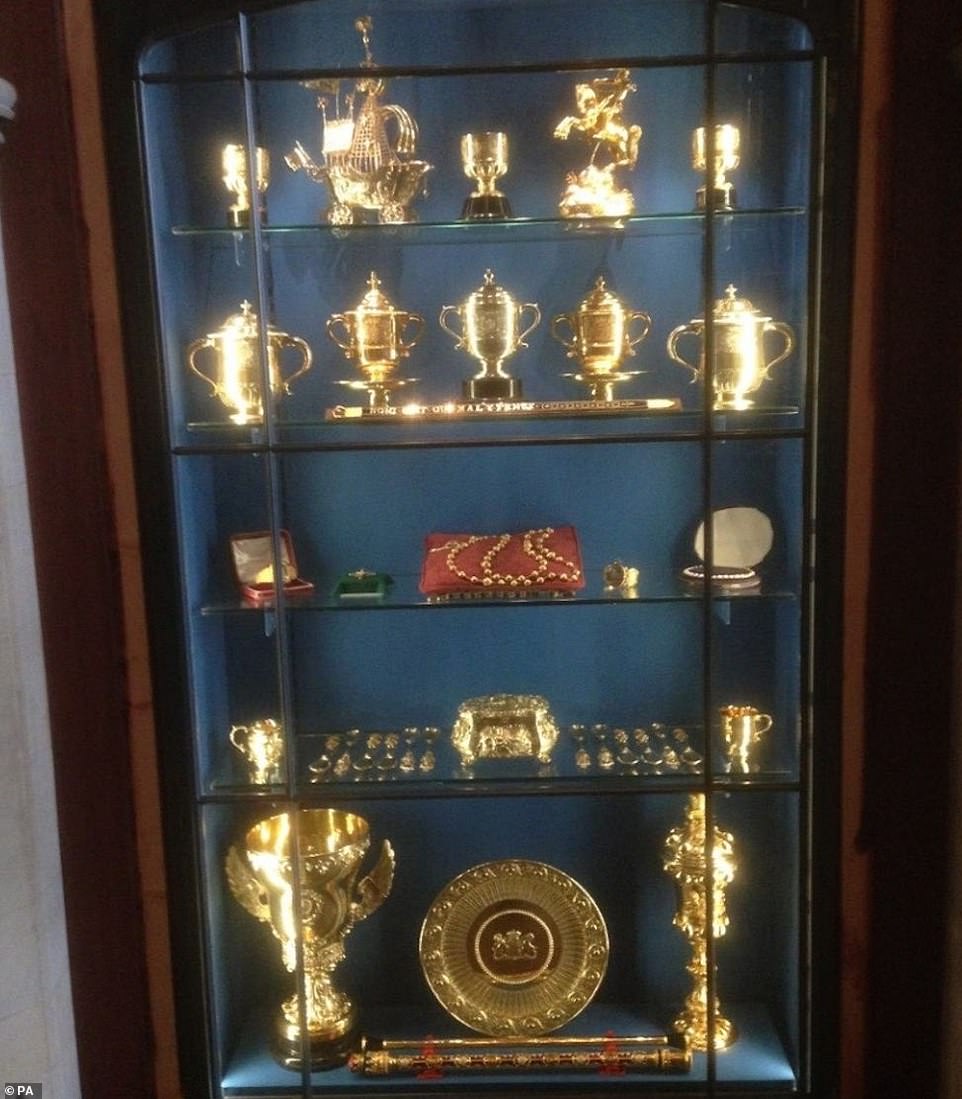 Alarms at the castle were tripped at 10.30pm and a display case (pictured) was smashed so thieves could snatch the treasure

Sussex Police say the beads have ‘little intrinsic value’ as metal but ‘as a piece of the Howard family history and the nation’s heritage they are irreplaceable’.

It’s feared that the haul of treasures may have been stolen to order for unscrupulous collectors. Or they could be lost forever if the thieves melt them down.

It is often wondered why thieves steal such priceless items which carry a far higher profile than regular thefts and burglaries.

A common reason specific antiques or historic items are targeted is that they have been stolen to order for unscrupulous collectors who are keen to get their hands on a piece of history.

Another reason often cited by experts is that they are used as currency by criminal gangs either because crime bosses have a penchant for the finer things or because they can be used in place of large amounts of cash which can often be traced easily.

Christopher Marinello, chief executive at Art Recovery International, who has been working in the field of lost art for 30 years, told Artnet News that thieves will often try to sell a work back to the museum that it was stolen from. 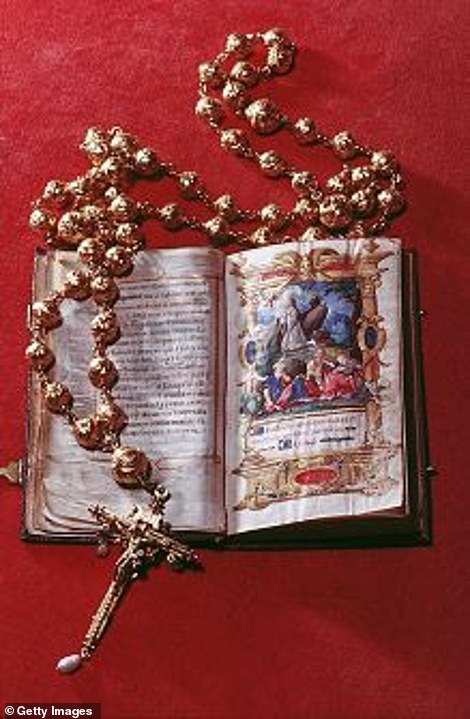 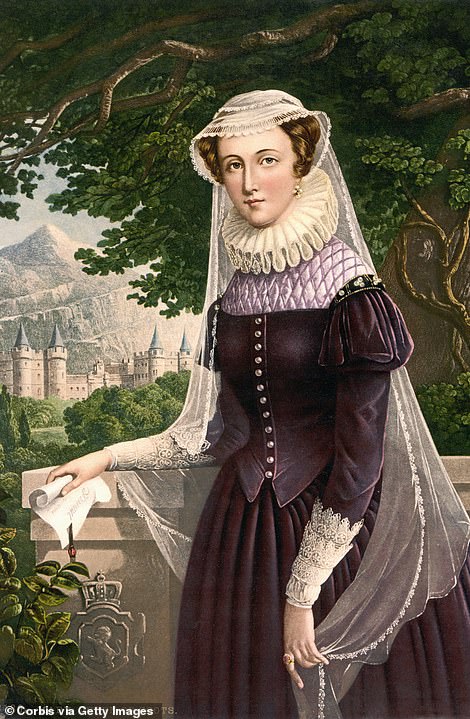 The rosary beads, which were carried by Catholic Mary to her execution in 1587, were among stolen gold and silver items said to be worth more than £1million. Pictured left: The rosary beads and bible belonging to Mary Queen of Scots (pictured right)

In 80 percent of cases, Marinello said that criminals will either try to hold the work for ransom, or wait for the museum to announce a reward for the return of the work.

The raid on Arundel Castle is just the latest targeted theft from stately homes across the UK in recent years.

In September 2019, burglars stole valuables from an exhibition at Sudeley Castle, Gloucestershire, including a ‘priceless’ Fabergé caviar box, gold snuff boxes and an enamel and rose Cartier gold fob watch.

They were gifts from King Edward VII to his mistress Alice Keppel, great-grandmother of the Duchess of Cornwall.

The jewellery and artefacts which were stolen were estimated to be worth around £127,000.

A gang of men targeted the building and forced their way into the exhibition area of the stately home. They smashed a display case and stole jewellery and artefacts from the Alice Keppel Collection. 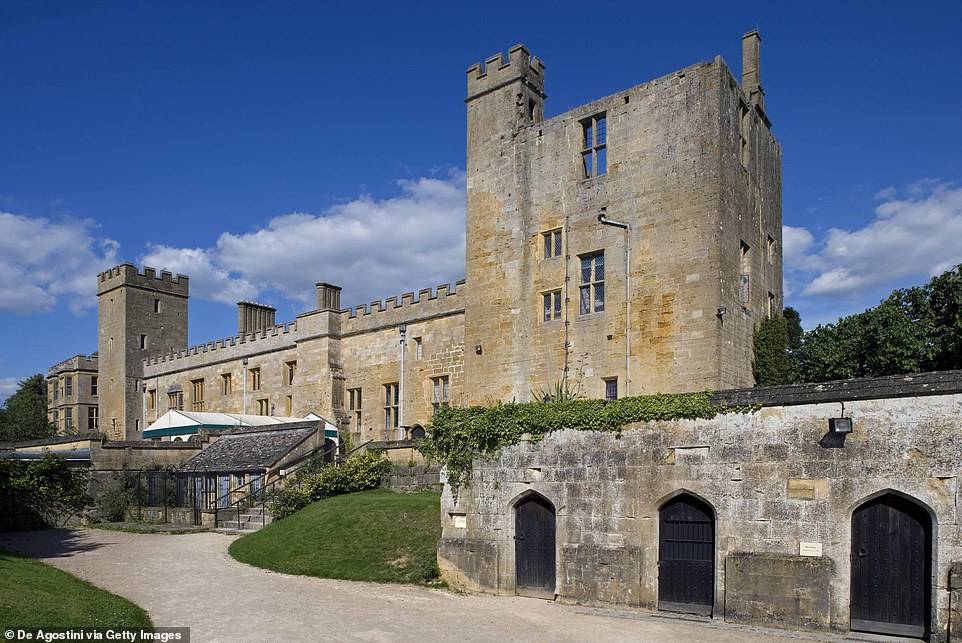 In September 2019, burglars stole valuables from an exhibition at Sudeley Castle, Gloucestershire (pictured), including a ‘priceless’ Fabergé caviar box, gold snuff boxes and an enamel and rose Cartier gold fob watch worth an estimated £127,000 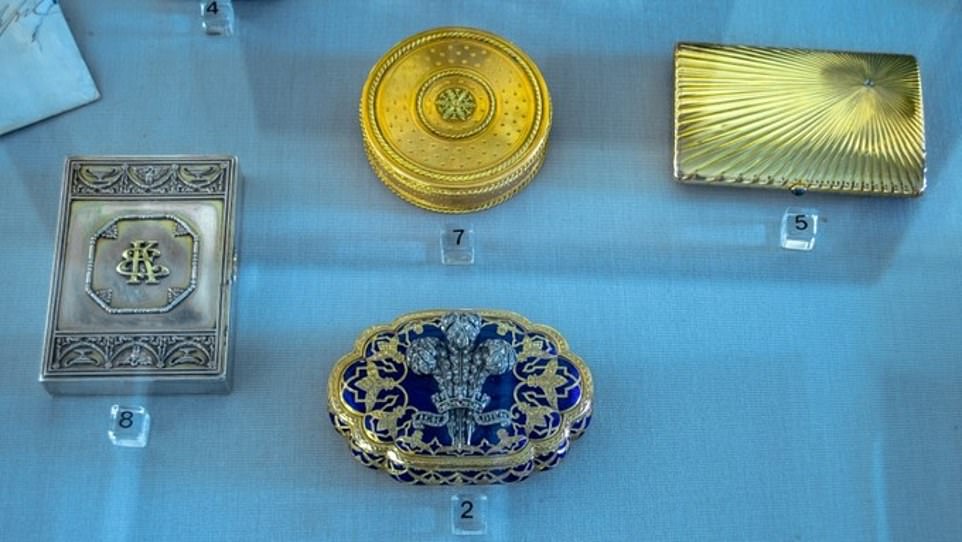 Only one thief was ever apprehended after the Sudeley Castle theft. He was identified by his DNA on a ‘snood’ which he left behind in the Castle gardens after the burglary on Sept 9th last year. Pictured: More of the jewels which were taken

They were on display as part of an exhibition called ‘Royal Sudeley 1,000, Trials, Triumphs and Treasures.’

Ms Keppel was a mistress of King Edward VII and was the grandmother of the late Lord Ashcombe, whose widow Lady Ashcombe now owns the Castle.

In October 2020, Clinton Bowen, 39, was jailed at Gloucester Crown Court after being identified as one of the four men who carried out the burglary.

He was identified by his DNA on a ‘snood’ which he left behind in the Castle gardens after the burglary but the remaining three suspects were never identified. 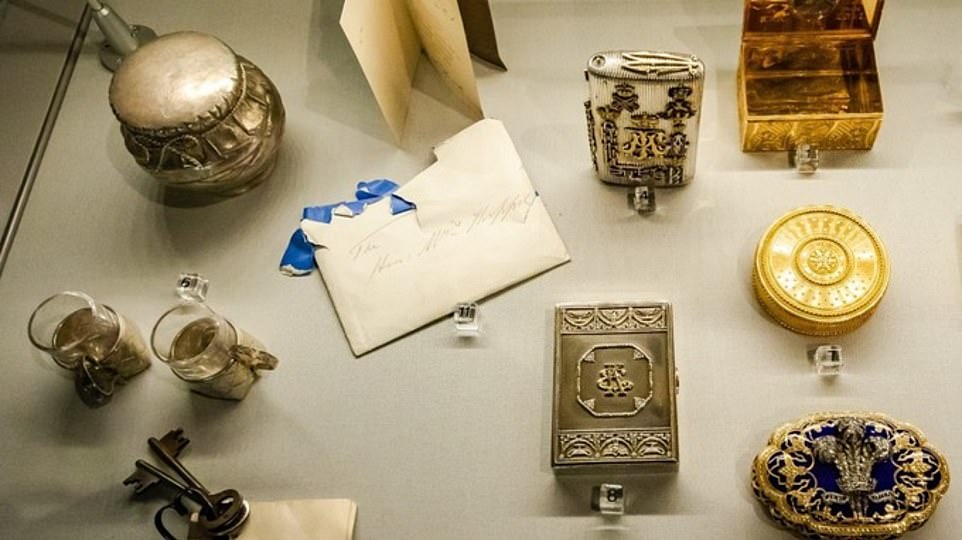 The thieves took £127,000 worth of jewellery and artefacts (pictured) during a raid on Sudeley Castle in September 2019 which were once owned by Alice Keppel, the great-grandmother of Prince Charles’s wife Camilla, the Duchess of Cornwall 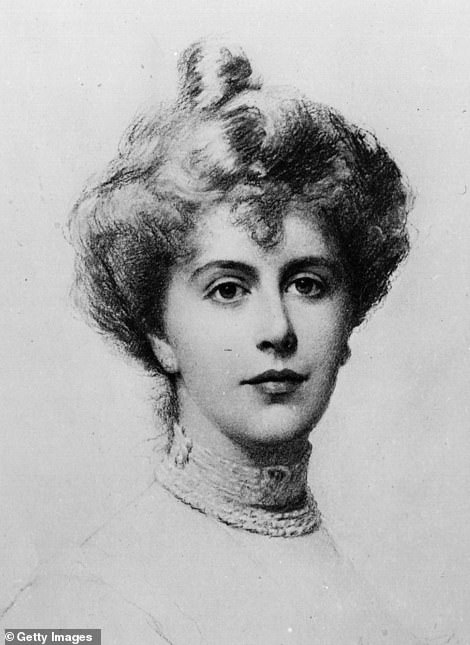 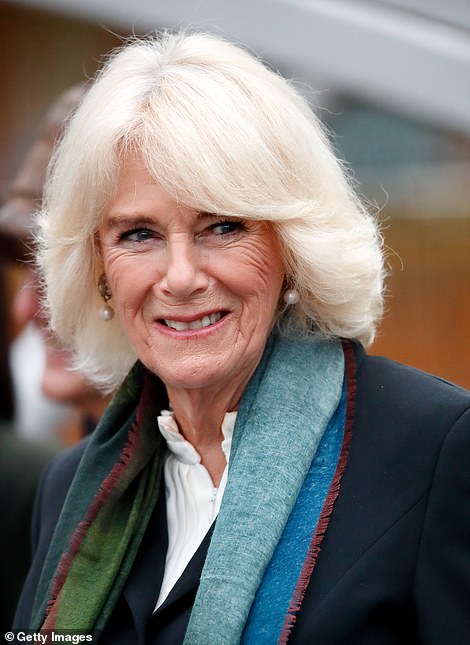 Alice Keppel was a mistress of King Edward VII and was the grandmother of the late Lord Ashcombe, whose widow Lady Ashcombe now owns the Castle. Camilla (right)  is the granddaughter of Ms Keppel’s younger daughter, Sonia Cubitt

In the same month Sudeley Castle was targeted, thieves also broke in Blenheim Palace and stole a solid golden toilet worth £5million.

Five burglars forced their way into the stately home in Woodstock through the front gates and drove onto the courtyard in the early hours of September 14, 2019.

Three of the men broke into the property, leaving the other two in the getaway vehicles, and located the toilet which had only been installed two days earlier.

The thieves, who were dressed in balaclavas and dark clothing, then ripped out the toilet causing damage to the plumbing and the floor.

The men then carried the solid gold toilet back through the palace and loaded it into one of the getaway cars before fleeing the scene.

The gold toilet stolen during the raid was fully operational and is yet to be recovered. It was created by controversial Italian artist Maurizio Cattelan. 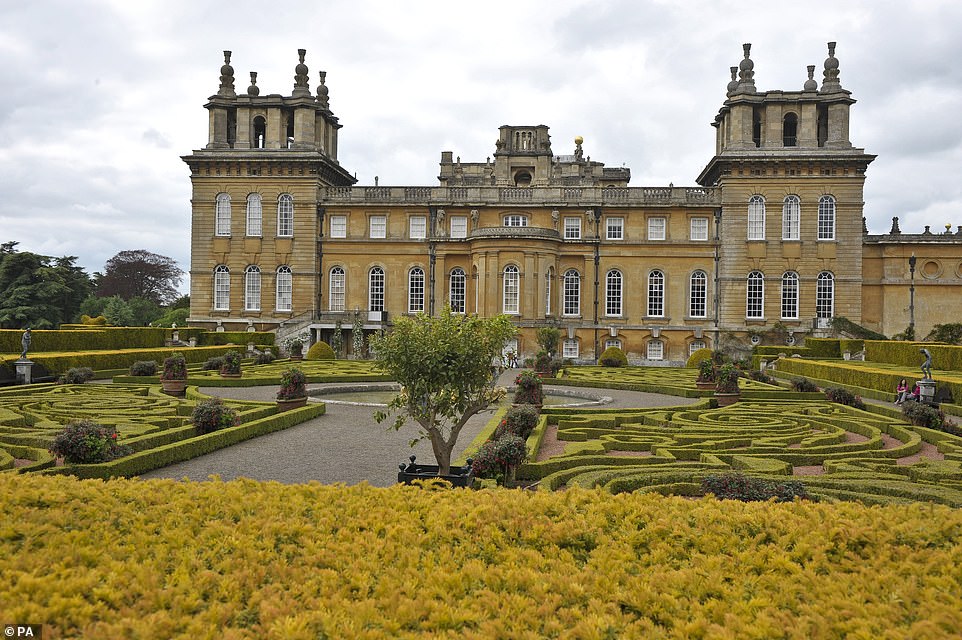 In September 2019, a gang of thieves broke in Blenheim Palace (pictured) and stole a solid golden toilet worth £5million 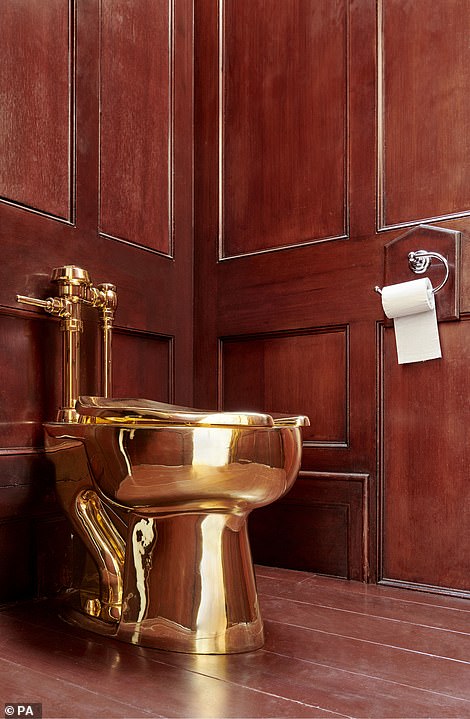 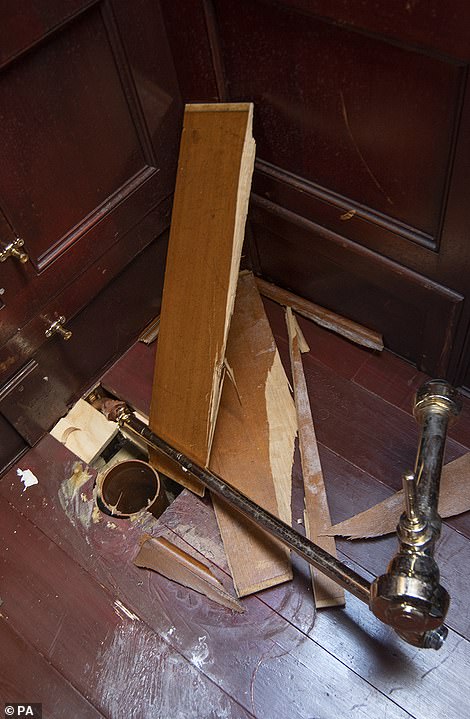 Pictured: the raiders pulled the solid 18 carat gold toilet from the wall, leaving behind several pipes and the toilet paper

Days after the burglary Mr Cattelan was forced to dismiss claims that the theft of the toilet, named America, had been a prank.

The 18 carat toilet, named America, was installed at the birthplace of Winston Churchill after being on display in New York where more than 100,000 people queued to use the toilet at the Guggenheim museum.

In total, seven people have been arrested in connection with the theft but no one has ever been charged.

A 68-year-old man from Evesham has been arrested on suspicion of burglary.

A 36-year-old man from Cheltenham has been arrested on suspicion of conspiracy to burgle.

A 36-year-old man, a 35-year-old man and a 38-year-old woman, all from Oxford, have been arrested on suspicion of conspiring to commit a burglary other than a dwelling.

A 37-year-old man from London has been arrested on suspicion of handling stolen goods.

A 45-year-old man from Kent has been arrested on suspicion of burglary. 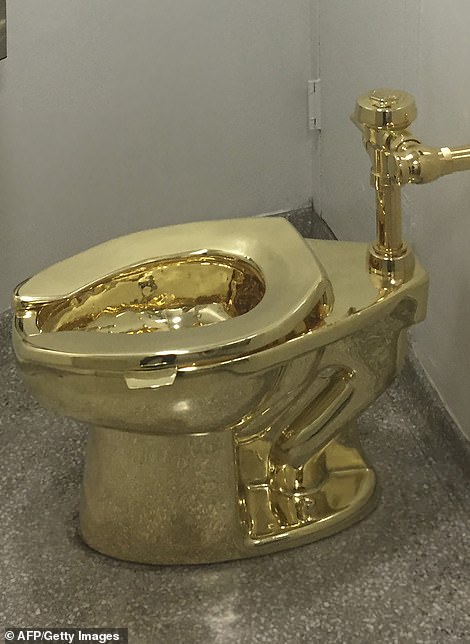 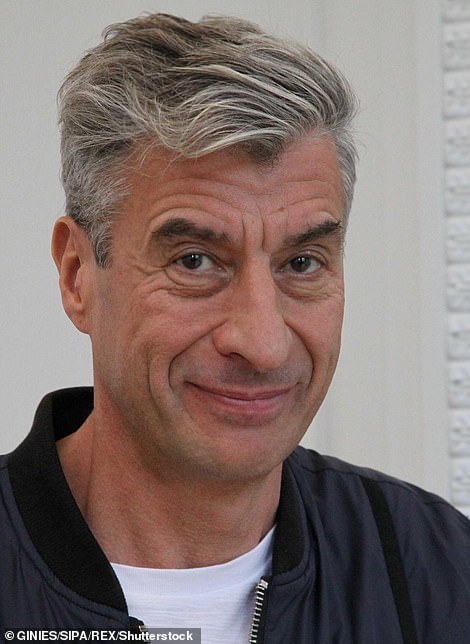 The 18 carat toilet was installed in the UK after being on display in New York where more than 100,000 people queued to use the gold toilet at the Guggenheim museum (left). Days after the theft at Blenheim Palace, it’s designer, artist Maurizio Cattelan (right) who has a history of pulling publicity stunts, was forced to dismiss claims that the theft had been a prank

All of the suspects were released under investigation and the enquiry being carried out by Thames Valley Police is ongoing.

In January 2016, an armed robber targeted Goodwood House and made off with £700,000 after tying up the aristocratic owners and forcing them to open a safe full of valuable antique jewellery.

The robber, possibly part of a gang, hit the Earl of March with a blunt instrument before escaping with loot worth some £700,000, including a ring Charles II gave to a favourite mistress who was an ancestor of the earl.

Lord March and his wife remained tied up until the morning, when a member of staff arrived for work. The couple have been left ‘devastated’ by the attack and theft.

The raid took place at Goodwood House in West Sussex, which is famous for its horse racing meetings and the Goodwood motoring festival.

Police said they believed the thief, dressed in black and wearing a balaclava, broke in through a first floor window using a ladder. 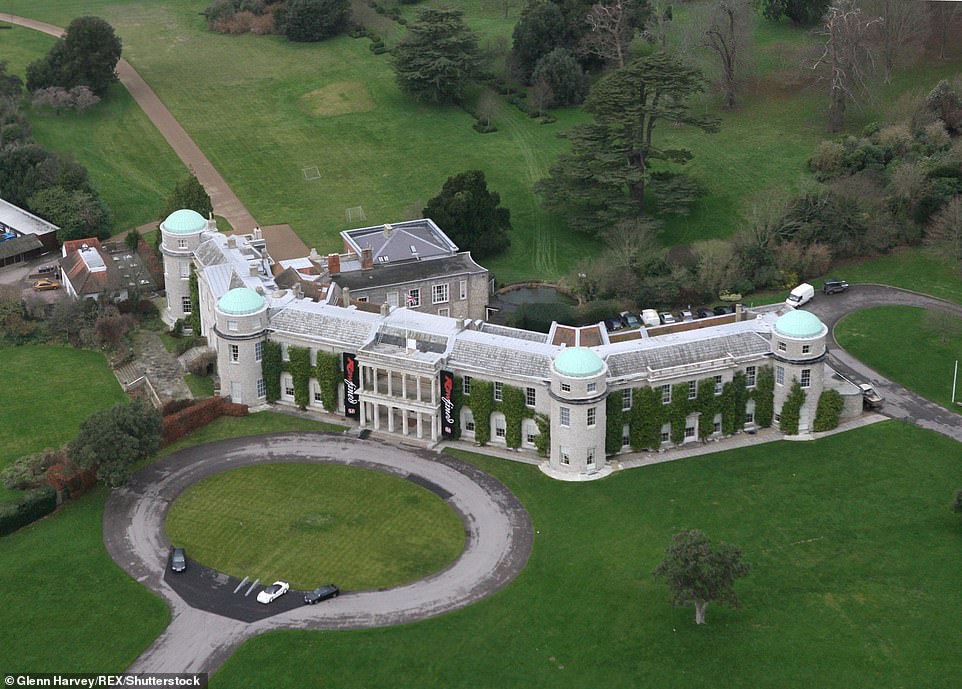 In January 2016, an armed robber targeted Goodwood House in West Sussex (pictured) and made off with £700,000 after forcing the aristocratic owners to open a safe full of valuable antique jewellery and then tying them up before he fled 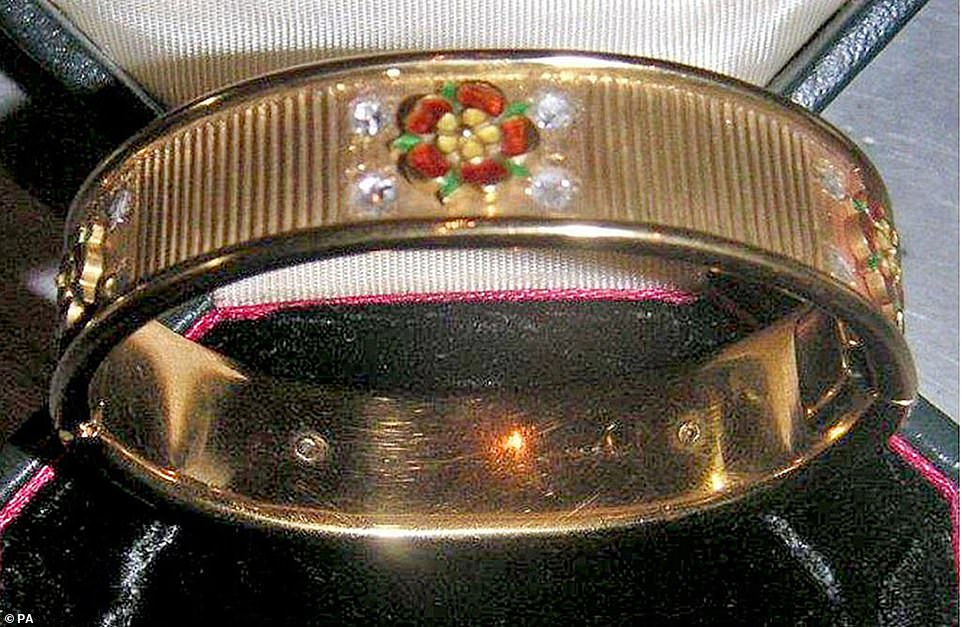 One of the items stolen in the break in at Goodwood House back in January 2016 where a thief made off with a £700,000 haul 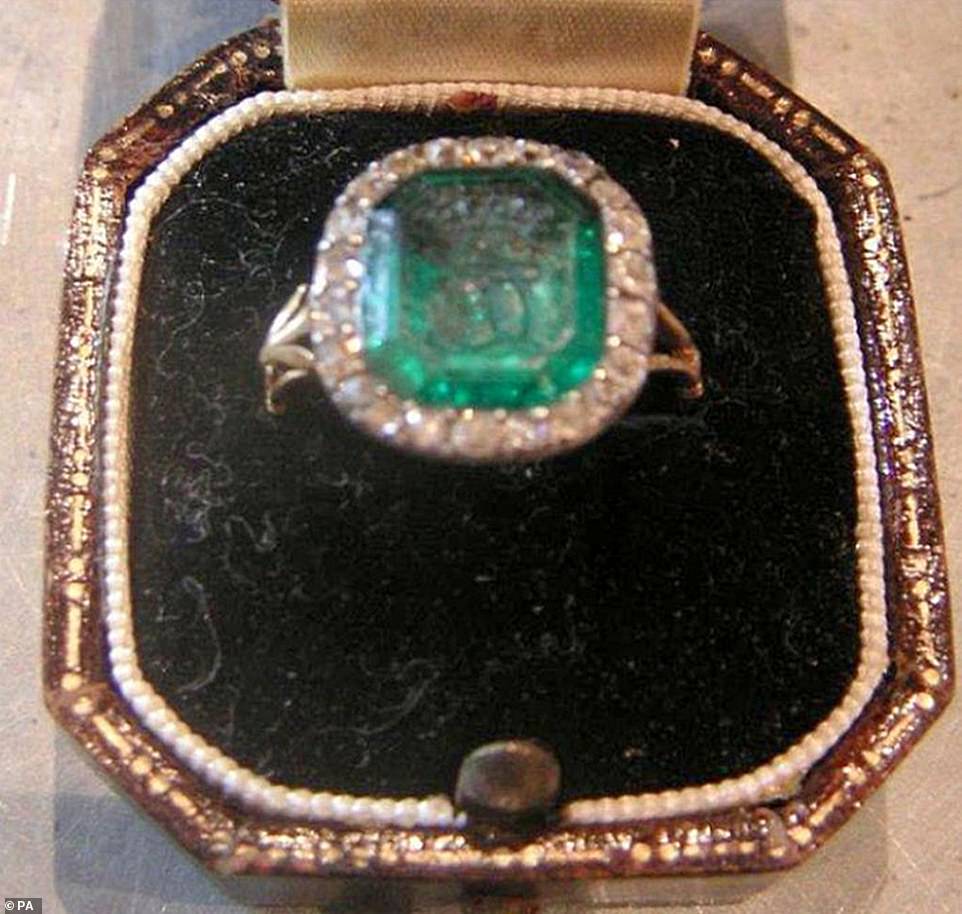 Pictured: An emerald intaglio and diamond ring from 1800, engraved with Duchess’s coronet and monogram CL for Louise de Keroualle, mistress of Charles II, stolen in the armed break in at Goodwood House, West Sussex, in January 2016

The noise of the break-in woke Lady March, 54, who went to investigate and ended up running into the robber outside her door.

The intruder then pushed her back into her bedroom and when Lord March, 61, stepped forward to help her, the burglar hit him on the head with a ‘blunt instrument’, causing an injury to his ear.

The criminal then forced Lady March to open the safe and left the property with his haul. It is not known whether he was working with accomplices.

Several high-value watches, including a Rolex and Girard-Perregaux, were also taken, along with emerald, diamond and sapphire rings, earrings, bracelets and necklaces.

So precious is the ring stolen during the raid that it has seldom been on display and was last seen in public when Downton Abbey’s creator, Julian [Lord] Fellowes, was allowed to try it on while filming an ITV series on stately homes. 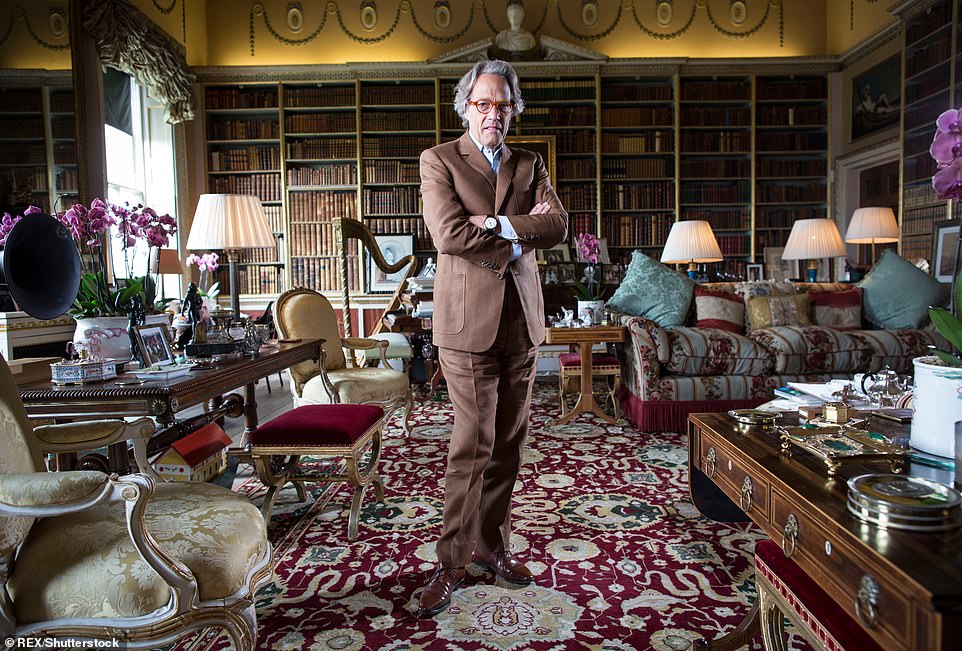 The Earl of March was repeatedly beaten in an ordeal at Goodwood House, his ancestral seat near Chichester in West Sussex 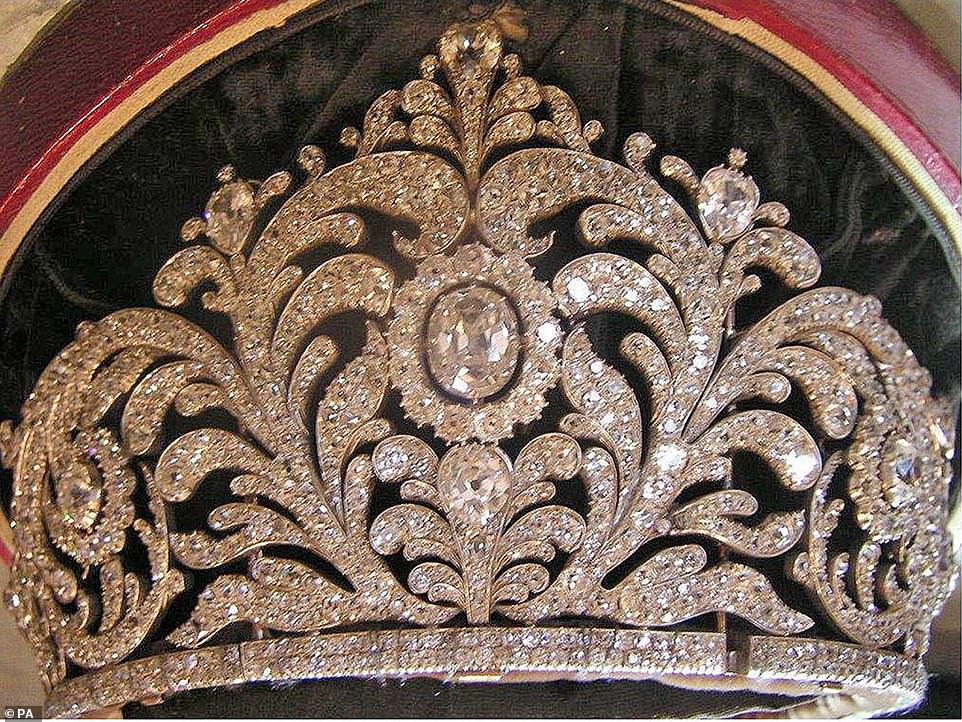 She left the ring to her son, Charles (named after his father the king) and it has gone down the male line ever since. He was later made Duke of Richmond and acquired Goodwood.

Lord and Lady March are understood to have been left tied up for about two hours before they were found and the police were called.

The robbery at Goodwood House has since been linked to a string of other similar robberies across Sussex and Surrey and is being investigated by Surrey Police under Operation Prometheus.

The force confirmed no arrests have ever been made.

There are not yet thought to be signs of clear links between these raids and the one at Arundel.

A spokesman for Arundel Castle Trustees said: ‘The stolen items have significant monetary value, but as unique artefacts of the Duke of Norfolk’s collection have immeasurably greater and priceless historical importance.

‘We therefore urge anyone with information to come forward.’