It began as a place online where you could share excess lemons with your neighbours, pass on clothes your kids had outgrown or lend someone a power tool: a utopian vision of an online community sharing gifts and advice. 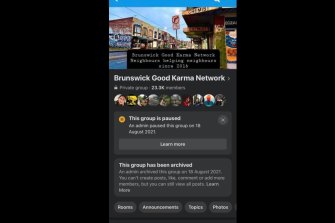 The Brunswick Good Karma Network has closed its Facebook group after allegations of “toxic positivity”, censorship and racism.

The group – which had more than 23,000 followers – shuttered its Facebook page indefinitely on Thursday.

Some group members had taken issue with the moderators deleting posts about crimes in Brunswick, allegations about a racist assault and the outing of a resident as an alleged neo-Nazi.

Many others said they had been evicted from the group for innocuous comments, even use of negative emojis, and that the fallout was a study in the limits of endless good karma without allowing a glimpse of the opposite.

But it was when the online conflict spilt into the real world, with posters of the moderators’ faces plastered around the streets of Brunswick, and claims grew louder about the suppression of minority voices, that the pin was pulled. 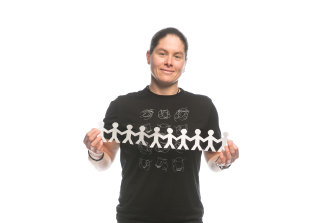 Amy Churchouse began The Good Karma Network movement in Kensington in 2016 and Brunswick soon after. Its overarching body, The Good Karma Effect, now has 140,000 members across 37 groups. 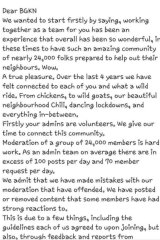 The guidelines do not allow “political, religious or inflammatory commentary”, business promotion and or reporting of crime.

A moderator, also known as a Good Karma Network Guardian, whose face was plastered on posters around the suburb, said they were trying “to maintain a safe space”.

“Being an open voice to political agendas is not what that group is about,” he said. “We have a very small element who have gone feral breaking those rules … the group is not about everybody having a soapbox.″⁣

But that has proved to be a challenge in a politically progressive suburb like Brunswick, where many believe sharing their opinion on a “community page” is their right.

“We have now reached a point where we as admins are not safe, in public or online. Our names are being shared online with no regard for our safety or wellbeing,” a moderator wrote in announcing the suspension of the page.

“Posters with our faces are being plastered on the street. Our heritage and intersectionality called into question. Our inboxes full of abuse,” the moderator wrote.

“Hopefully we can share our lemon boxes, moving boxes and pictures of puppies again soon.”

Problems in the group had escalated rapidly in recent weeks after moderators rejected a post from a man who wrote he was rescued by strangers from being beaten up by “racist white lads” in Sydney Road and wanted to track down his saviours to make them “tea and Iranian food”.

A moderator explained the post’s rejection: “We like to focus on the positive side of life. We’d love to acknowledge the help you received from the community, without highlighting the negativity.” 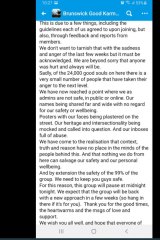 The sign-off note for the Brunswick Good Karma Network.

This led to accusations of the man’s experience of racism not being validated. The post was shared on a rival group, the Brunswick Fairly Good Karma Network, and other people from minority groups complained that their experiences of racism had also been blocked from the site.

Then moderators rejected posts about a woman exposed by The Age as an alleged neo-Nazi, who runs a children’s music business in the suburb, prompting accusations of threatening people’s safety and facilitating racist behaviour.

Prominent activist Clementine Ford then weighed in on social media, telling followers to quit the group in protest. Hours later the moderators announced it was going into hiatus.

Ms Churchouse, the Good Karma Effect’s CEO, said she was devastated by the need to close the group. The organisation’s Kensington group met a similar fate two years ago.

“I feel sad that people can’t see the damage they are doing to other humans – even if you do it for a good cause,” she said.

“There was a call that a racist thing happened and it was completely unfounded.

“We’ve got a bunch of volunteers, who have been trying to keep this community safe and positive, not feeling safe in their own suburb because somebody decided to scream racism from the rooftops.”

“All of this has unfolded as a result of people deciding that they just want to get validation across the internet.”

Ms Churchouse said numerous attempts to have a dialogue with those making racism accusations had been ignored.

“What we’ve seen consistently with the kind of furore that gets social traction, they don’t want to have discussions… [there’s] no, let’s give everybody the benefit of the doubt,” Ms Churchouse said.

Former group members making such allegations did not respond to requests for comment.

“[The group] was set up for a particular purpose for a particular set of things. Nobody needs to be there, nobody is required to be there … There are 23,000 people that love that page. The reason that it became popular is because it’s a positive place on the internet.”

Rival group the Brunswick Fairly Good Karma Network, which has more than 5000 members, allows open political discussion and small business promotion as well as gifting and sharing positive stories. It has grown by more than 1000 members since the other Karma group closed.

Founder Sam Watkins had been evicted from the original group.

”The group or some moderators were accused of racism, but I tend to think it was more about wanting to keep their group focused on “positive” things. It is OK for a group to have a limited scope or topic like this.“

But Mr Watkins’ more laissez-faire approach to moderation is being tested by members wanting to vent.

“If this goes on for too long I’ll stop it. I can see that people are upset about what happened in the other group and I don’t want to step in and do heavy moderation … I’m letting it go, for now,” he said.

“We do have some rules, but it’s not so strictly applied. I can’t be total anarchy because Facebook has its own rules. There’s also the rules of Australia, so we have to follow some sort of standard.”