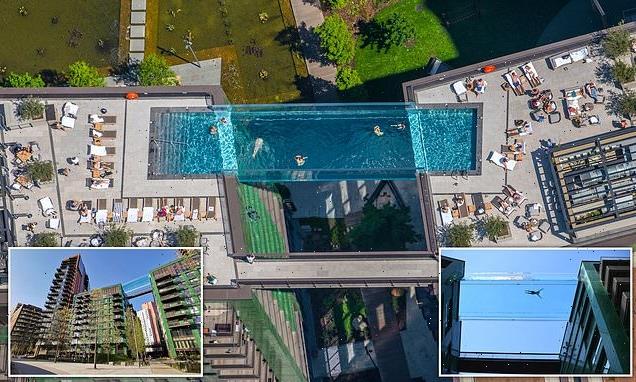 Residents of an exclusive residential block want the world’s first transparent sky pool to be closed throughout winter due to its huge heating costs.

People living in Embassy Gardens, in Nine Elms, south London, say the water is too cold for people to swim in during the winter months when the temperature drops.

The stunning pool stands across two residential blocks 115ft above London, giving bathers the opportunity to watch passers-by below them and gaze across the city skyline as they float.

It was opened in May and regarded as the show-stopping highlight of the £1billion development near the Thames.

However, residents say the pool – which can only be used by residents and their guests – is too cold to use in the winter and costs £164,250 to keep the 375 tons of water heated throughout the year. 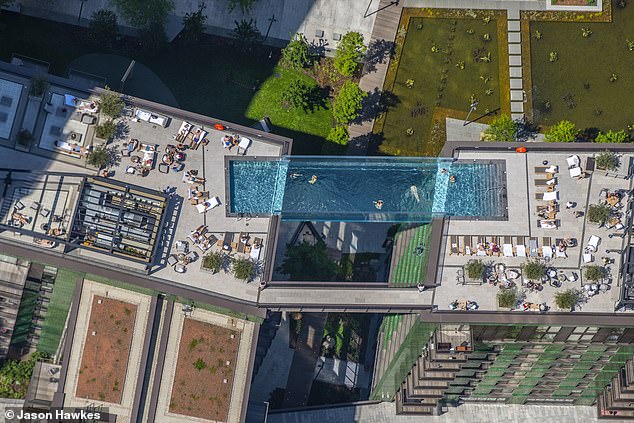 Residents living in the exclusive Embassy Gardens, Nine Elms, south London, have called for the world’s first sky pool to be closed during winter due to the huge cost of keeping it warm 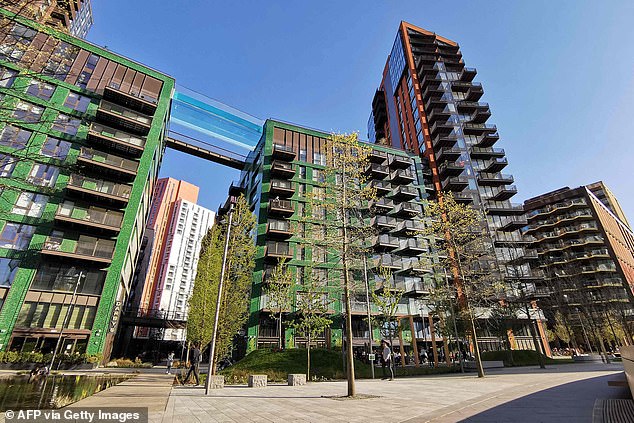 Those living in a two-bed flat at Embassy Gardens – where flats cost up to £4.5million – pay a service charge of up to £9,000 per year 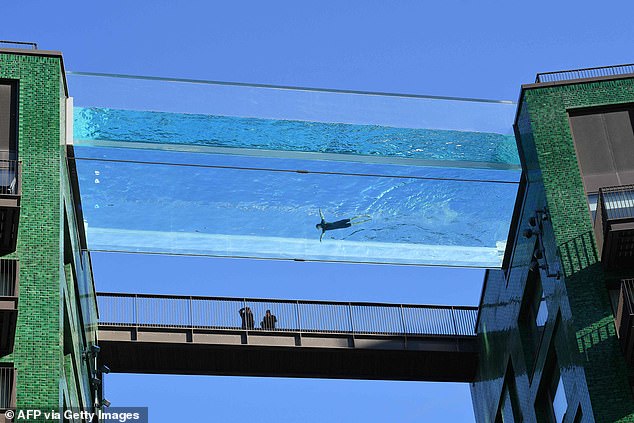 The stunning pool stands across two residential blocks 115ft above London, giving bathers the opportunity to watch passers-by below them and gaze across the city skyline as they float 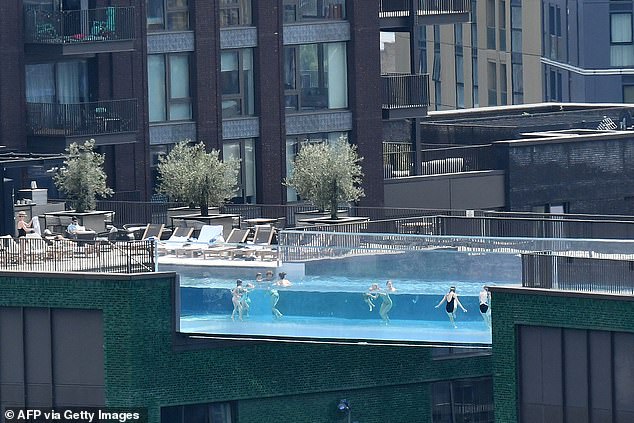 However, residents say the pool is too cold to use in the winter and costs £164,250 to keep the 375 tons of water heated throughout the year

A couple living in the development told The Sun: ‘It is too cold to be used at the moment so it seems mad that we’re still having to pay to heat it.

Those living in a two-bed flat at Embassy Gardens – where flats cost up to £4.5million – pay a service charge of up to £9,000 per year, according to the newspaper, with much of the money going towards heating the Sky Pool and another swimming pool in the development.

Those who have braved the water this winter said it was only possible for a few minutes while others claimed a cover, which is designed to keep the pool warm during the winter, is now broken.

Another resident – who said they were ‘livid’ about the costs of the pool, which is ‘open to residents and uncovered’ – said they are ‘basically heating the sky’.

The development’s residents’ association is reportedly planning to ask, at its next meeting, for the Sky Pool to be shut during the winter to save on costs.

The world’s first transparent sky pool was opened on May 19 after a delay due to Covid, and set the seal on an ambitious engineering project which involved transporting the acrylic aquarium-style pool nearly 5,000 miles from the factory in Colorado where it was made.

The pool features a rooftop spa, summer bar and orangery.

Swimmers have been able to enjoy views across central London while completing lengths between the buildings in the new residential neighbourhood in Nine Elms, Vauxhall.

Suspended 35 metres above the ground, the iconic structure offers views of the Houses of Parliament, the London Eye and London’s city skyline. 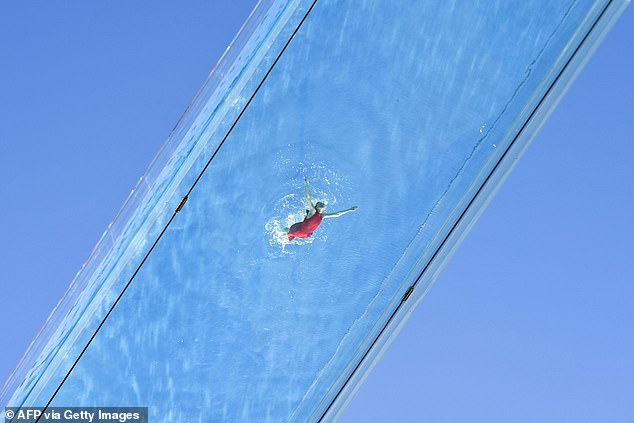 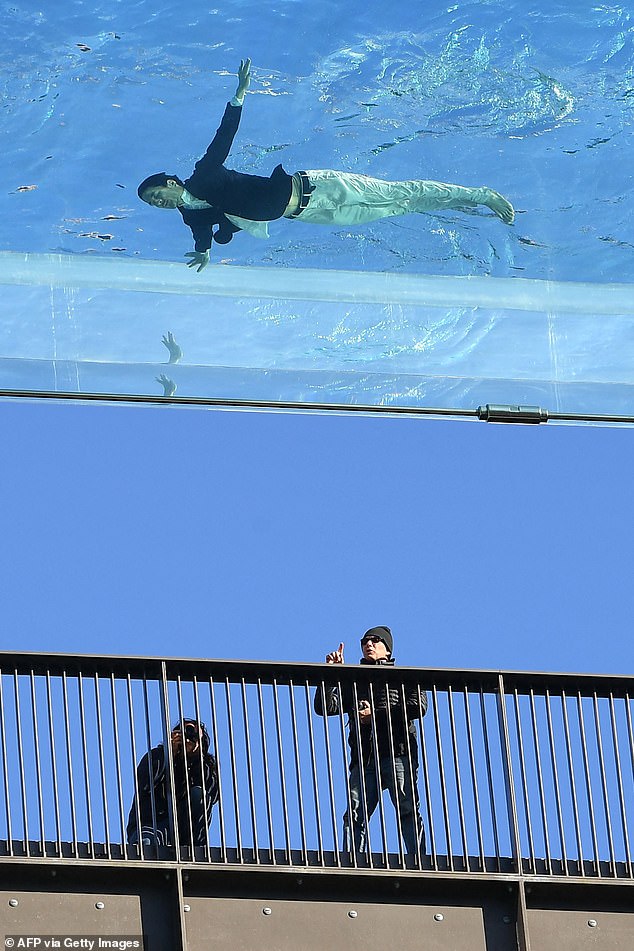 The acrylic aquarium-style pool was transported nearly 5,000 miles from the factory in Colorado where it was made before its official opening in May this year

When it opened, the 25m-long, 5m-wide and 3m-deep infinity pool, was set to become the most exclusive venue to take a dip in Britain.

But people on social media were squeamish at the prospect of going swimming more than 100ft in the air, with Twitter users calling the pool a ‘recipe for disaster’ and ‘a nightmare’.

‘Not swimming out over that glass death pool nope nope nope’, one person tweeted, while another said: ‘I love heights but some things just aren’t worth it. I’ll stick to in-ground pools’. Others posted funny GIFs of actor Danny DeVito shaking his head and saying ‘no’.

Swimming 115 feet above the ground: The Sky Pool in numbers

Plans for the Sky Pool on top of the Embassy Gardens’ Legacy Buildings were first drawn up in 2013.

Here is the incredible swimming pool in numbers:

The intricate work to transport and install the Sky Pool involved a team of expert architects, engineers and consultants who had only inches of tolerance when placing the structure across the two buildings.

The team, made up of architects Arup Associates, engineers Eckersley O’Callaghan and aquarium designers Reynolds, shipped the huge bath to London, then gingerly craned it into position.

Plans for a floating pool, known as the Sky Pool, were first drawn up in 2013 by designers penning ideas for the Embassy Gardens’ Legacy Buildings development.

The pool is the highlight of the development by EcoWorld Ballymore, which includes 2,000 luxury homes apartments, a retail space, office space, bars, restaurants and landscaped gardens.

The buildings sit next to the billion-dollar US Embassy building.

A floating pool was decided on for the new flats as it was the only place architects could find space to work a swimming pool into their building plans.

The 82ft acrylic pool was developed in Colorado, and was put through ‘extensive strength testing’ before being shipped to the UK – a journey that took three weeks.

The giant heated tub, which holds 375 tonnes of water, has been developed using special technology that allows it to move in high winds.

The pool structure can deal with these movements by not being rigidly connected at both ends as it can slide while maintaining water-tight integrity.

The acrylic structure is held up by an invisible steel frame and is fully transparent despite the base of the 10ft deep pool being nearly 12-inches thick.