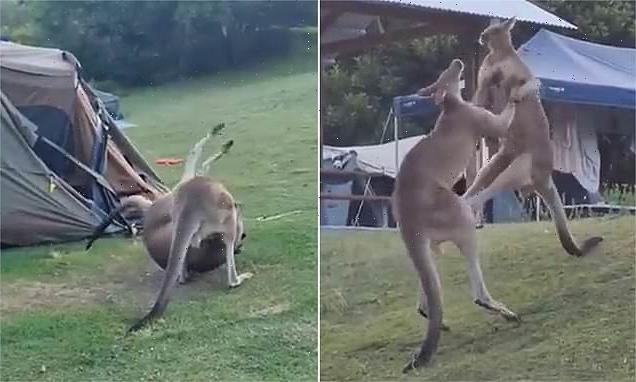 Roo want a piece of me? Campground chaos as two muscular kangaroos face off in wild brawl ‘over a female’ – before crashing into a tent where four children slept

Two brawling kangaroos have caused chaos at a camping ground after they fell onto a tent in which a family slept.

The two Eastern Grey kangaroos woke campers as they crashed into tables and tents while they brawled through the Trial Bay Gaol campground at Arakoon on the NSW mid-north coast on the morning of January 14.

The fight ended as the two barrelled into a family’s tent, landing on top of four sleeping children and shredding the structure. 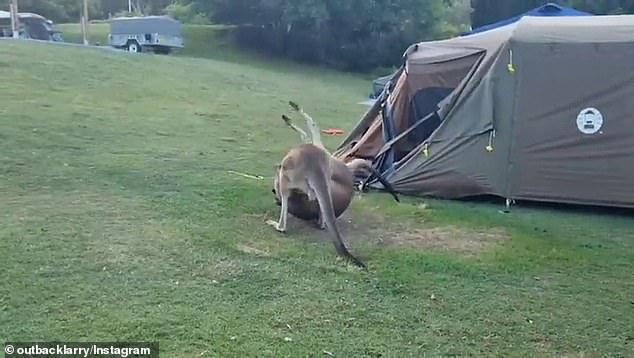 The video shows the kangaroos sizing each other up and fighting across the campgrounds before making their way down the hill towards the family’s tent.

‘They crashed right through the tent right onto the girls’ mattress,’ Mr Whiteman posted.

‘It was only blind luck that the kangaroos didn’t injure them.’

The mother of the family, who had woken up early and watched the brawl with Mr Whiteman, can be heard screaming as the family tent was shredded by one of the roos’ claws.

Mr Whiteman had to hold the mother back from trying to separate the animals.

‘I knew if she went in between those two kangaroos one of them was going to hurt her,’ he told The Maitland Mercury.

‘The kangaroos moved away from the tent after that and I think one passed out from being choked… They left shortly after that.’ 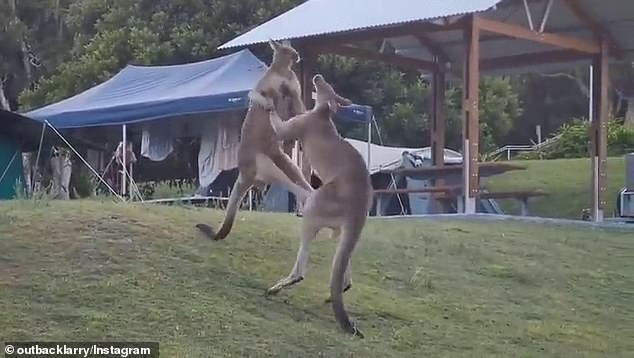 The two ‘roos had fought for seven minutes before they landed on top of four children and slashed the tent they were sleeping in. Luckily, there were no injuries

The fight is believed to have been caused by a common interest in a female.

According to the Department of Environment and Science, Eastern Grey kangaroos can brawl year-round as they don’t have a set mating period.

This means that in a mob of kangaroos, the dominant male is constantly looking out for any threat to the females in his mob, including other male kangaroos or even humans.

‘Don’t go near male kangaroos that are sparring, fighting or showing off their size and strength to each other,’ the DES website warns.