Oil and gas companies are being invited to bid for exploratory drilling rights across 80,000 square kilometres of Commonwealth waters, including an area just a few kilometres from Victoria’s prized Twelve Apostles national park.

The federal government on Tuesday released 21 offshore blocks across the country for exploratory drilling, including in Victoria’s Gippsland and Otway basins, plus basins in Western Australia and Tasmania. One designated area sits six kilometres from the Twelve Apostles Marine National Park, off the coast of Port Campbell in south-western Victoria. 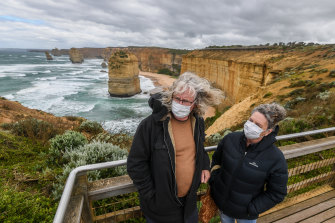 Tourists at the Twelve Apostles, one of the state’s major attractions.Credit:Justin McManus

Federal Resources Minister Keith Pitt said exploration would continue to play a role in supporting economic growth through investment and development prospects, and help fuel the Commonwealth’s plan for a “gas-fired” recovery from the COVID-19 pandemic.

“The continued release of areas for exploration is important to providing a steady supply of energy for the future. I would welcome and encourage industry bidding on the released areas,” he said.

However, the move has angered environmental advocates, who demanded an urgent rethink.

“The carving up of the oceans to hand them to the fossil fuel companies happens without any environmental consideration and without any meaningful space for the community to have their say,” Wilderness Society campaigner Jess Lerch said. 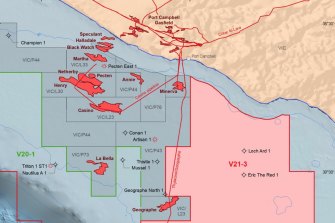 The area designated by the federal government.

“Not even a national icon like the Twelve Apostles will constrain the mindless release of acreage.”

The Australian Petroleum Production and Exploration Association – representing the oil and gas sector – said it had world-class regulatory processes designed to protect unique flora and fauna and areas of heritage value.

“Any future project proponent would be subject to a comprehensive approvals process, which includes detailed stakeholder engagement with local communities,” a spokesman said.

The release of new offshore areas for drilling comes a month after the International Energy Agency released a landmark report finding the world must avoid tapping new oil and gas fields in order to achieve the Paris Agreement goal of limiting global temperature rises to 1.5 degrees.

The warning raises questions for Australia’s biggest oil and gas producers, which are pursuing plans to tap huge new offshore fields, and has dominated discussions at a major oil and gas industry conference this week in Perth.

Supporters of gas, including the Morrison government, describe it as a necessary “transition fuel” in the green power shift, as a comparatively less-emitting alternative to coal that can keep energy reliable and affordable in periods when weather conditions for wind and solar generation are unfavourable. Gas is also used as a raw material in a range of manufacturing processes.

But the fossil fuel’s future is increasingly under question, with scientists and climate advocates arguing gas remains a heavy source of emissions and its role must be limited.

All areas in the Commonwealth’s latest offshore release are based on industry nominations and it is asking companies for work-program bids, the federal government said on Tuesday.

Two other wells in the area – Loch Ard 1, Eric The Red 1 – were previously explored and came up dry. There are currently three productive gas wells in the Port Campbell area.