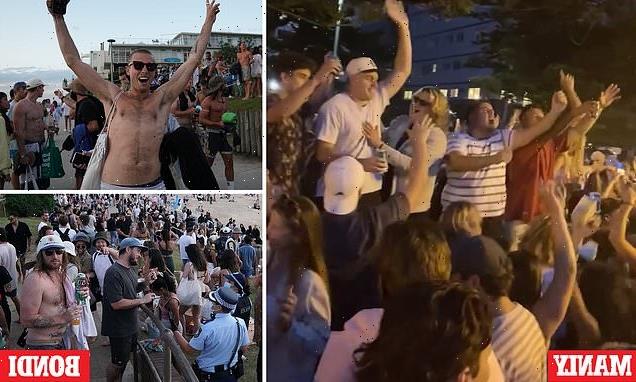 Chaotic scenes at Bondi Beach and Manly ahead of freedom day

Hundreds gathered by the water at Bondi and Manly on Saturday night to party ahead of Covid restrictions being relaxed on Monday for double-jabbed residents.

Massive crowds flocked to ‘The Office’ in Manly – a popular waterfront spot near the wharf – where music was blasting and an impromptu dance floor was set up.

Revellers were filmed crammed together and maskless as they belted out ABBA songs with drinks in tow while some were reported urinating.

Similar scenes occurred at Bondi beach, after police were forced to disperse huge crowds who began congregating throughout the day.

A number of move-on directions were given to residents while no fines were reportedly issued despite public health orders being in place until Monday.

Under Covid-19 restrictions only groups of five fully-vaccinated adults are allowed to gather outdoors until the state’s stay-at-home orders are eased on October 11.

Reaction was mixed on social media, where images and footage of the wild scenes were shared.

‘This is anarchy. Yes, alcohol can be consumed there, but police aren’t powerless- there are also public health orders that can be enforced,’ wrote local news publisher Manly Observer.

‘Where are the police?’, questioned one local, while another slammed the revellers for being ‘selfish’ and ‘privileged’.

Others praised the large groups of young people for having a good time on a Saturday night.

Public health orders are still enforced until Monday October 11, with only groups of five fully-vaccinated adults permitted to gather outdoors

‘This is what happens when people are caged up like animals,’ wrote one man.

‘Is 28 hours actually going to make any difference to the outcome?,’ pointed out another.

‘Let’s just put things into perspective. It’s been a horrendous couple years for the youths especially. They are in the prime of their life and are certainly very excited the world is about to open up next week and they are in a highly vaccinated LGA. Enough of the generational warfare,’ reasoned another.

Double vaccinated residents will be able to enjoy greater freedoms from October 11 after NSW hit its 70 per cent vaccination target this week.

As of Monday up to ten visitors will be allowed to gather at a home where all adults are vaccinated, while outdoor gatherings have a 30 person limit.

Pubs, restaurants and cafes will open back up with beachgoers no longer having to rely just on picnics for food and drinks.

How Mormon teens are getting round their religion's premarital sex rules