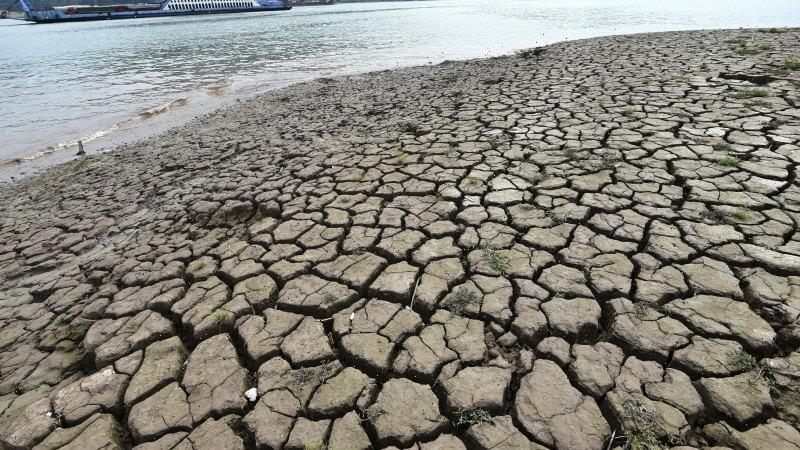 Shanghai: China is scrambling to alleviate power shortages and bring more water to the drought-hit basin of the Yangtze River as it battles a record-breaking heatwave by deploying relief funds, seeding clouds and developing new sources of supply.

For more than two months, baking temperatures have disrupted crop growth, threatened livestock and forced industries in the hydropower-dependent regions of the southwest to shut down so as to ensure electricity supplies for homes. 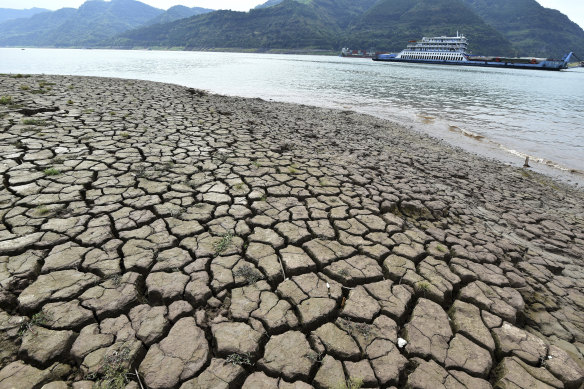 A dried riverbed is exposed after the water level dropped in the Yangtze River in Yunyang county.Credit:AP

China has repeatedly warned that it faces a proliferation of extreme weather events in coming years as it tries to adapt to climate change and rises in temperature that are likely to be more severe than elsewhere.

The current extreme heat is likely to stem from a “special case” of high pressure from a West Pacific subtropical high extending over much of Asia, said Cai Wenju, a researcher with Australia’s national scientific research institute, CSIRO.

On Wednesday, China’s southwestern province of Sichuan said it would ration power supplies to homes, offices and shopping malls, after having already ordered energy-intensive metals and fertiliser producers to curb operations.

In what appears to be an official call to cut back use of electricity, government offices were asked to set air conditioners no lower than 26 degrees and use more staircases instead of lifts, the Sichuan Daily, run by the provincial government, said. 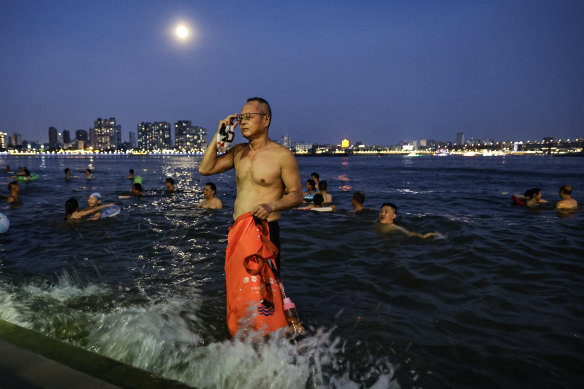 People swim in the intersection of the Han and Yangtze rivers during a heat wave on August 10.Credit:Getty

Fountains, light shows and commercial activities after dark are to be suspended, it added.

Power shortages have also prompted several companies in the sprawling Chongqing region bordering Sichuan to say they would suspend production.

Chinese vice premier Han Zheng visited the State Grid Corporation on Wednesday and said further efforts were needed to ensure power supply for residents and key industries, and to prevent power cuts, according to a state media report.

Hydropower makes up about 80 per cent of Sichuan’s power capacity, but dwindling water flows on the Yangtze and its tributaries led to a struggle to meet mounting demand for air conditioning as temperatures soared to 40 degrees and beyond.

Average precipitation in Sichuan is 51 per cent less than that of previous years, according to state news agency Xinhua, which cited the provincial branch of State Grid.

Some reservoirs have dried up, after water from major rivers reduced by as much as half, it said.

Drought throughout the Yangtze river basin was also “adversely affecting” drinking water for rural people and livestock, as well as the growth of crops, the water resources ministry said in a notice.

It urged drought-hit regions to make plans to maintain water supply with steps such as temporary water transfer, the development of new sources and the extension of pipe networks.

To boost downstream supplies, China’s biggest hydropower project, the Three Gorges dam, will step up water discharges by 500 million cubic metres over the next 10 days, it said on Tuesday. Water flows there this week were about half those of a year earlier.

Some livestock from drought-hit areas had been temporarily moved elsewhere, the finance ministry said this week, promising disaster relief of 300 million yuan ($64 million).

On Wednesday, the central province of Hubei became the latest to unveil an effort to induce rainfall, by sending airplanes to fire the chemical silver iodide into the clouds.

Other regions on the Yangtze have also launched “cloud seeding” programmes, but with cloud cover too thin, operations in some parched areas have stayed on standby.

China’s heatwave has run for 64 days, making it the longest since full records began in 1961, state media said, citing data from the National Climate Centre.

As many as 262 weather stations have recorded temperatures of 40 degrees and above, also the highest such tally. Eight have seen 44 degrees.

High temperatures will persist until August 26 in the Sichuan basin and large parts of central China, the centre forecast.

What is Liz Cheney's political party? | The Sun