Home » World News » Christmas in The Big Apple 120 years ago 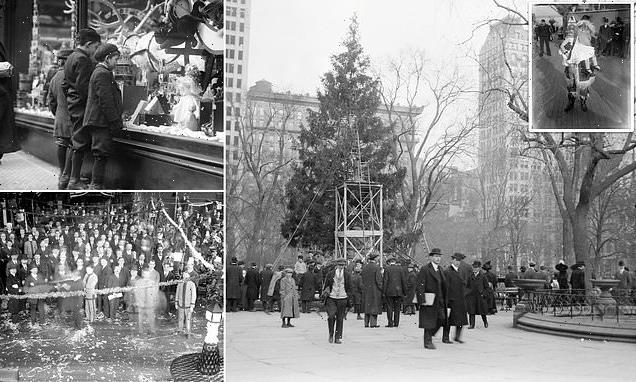 Christmas in The Big Apple 120 years ago

Christmas in The Big Apple 120 years ago: Black and white pictures show crowds of shoppers buying presents and preparing for holidays in New York City in the early 1900s

This fascinating series of vintage photographs shows how New Yorkers were preparing for Christmas over a hundred years ago.

The pictures – taken between 1900 and 1916 – feature everyday scenes of people in The Big Apple during the festive season.

They document Manhattan streets thronged with shoppers, as well as images of street hawkers selling their seasonal wares.

Other highlights include children eagerly window shopping and crowds gathered around an outdoor Christmas tree in Madison Square Park.

The park is reputed to be the site of the United States’ first public Christmas tree lighting ceremony in December of 1912. The 30-foot-tall Norwegian Spruce is said to have attracted some 25,000 visitors over the holiday period, and the tradition has continued to this day.

Another poignant photo shows people packing Christmas gifts for the USS Jason, a cargo ship which sailed from New York on November 14, 1914 carrying about six million gifts for the children of Europe who were affected by World War I.

Elsewhere, an image shows Christmas celebrations at the Consolidated Stock Exchange just off of Wall Street, a competitor to the current New York Stock Exchange.

The photographs were captured by the George Bain Agency, one of America’s earliest news picture agencies, which are now held at the Library of Congress.

The photographs Bain produced and gathered for distribution through his news service were worldwide in their coverage, but there was a special emphasis on life in New York City. The bulk of the collection dates from the 1900s to the mid-1920s. 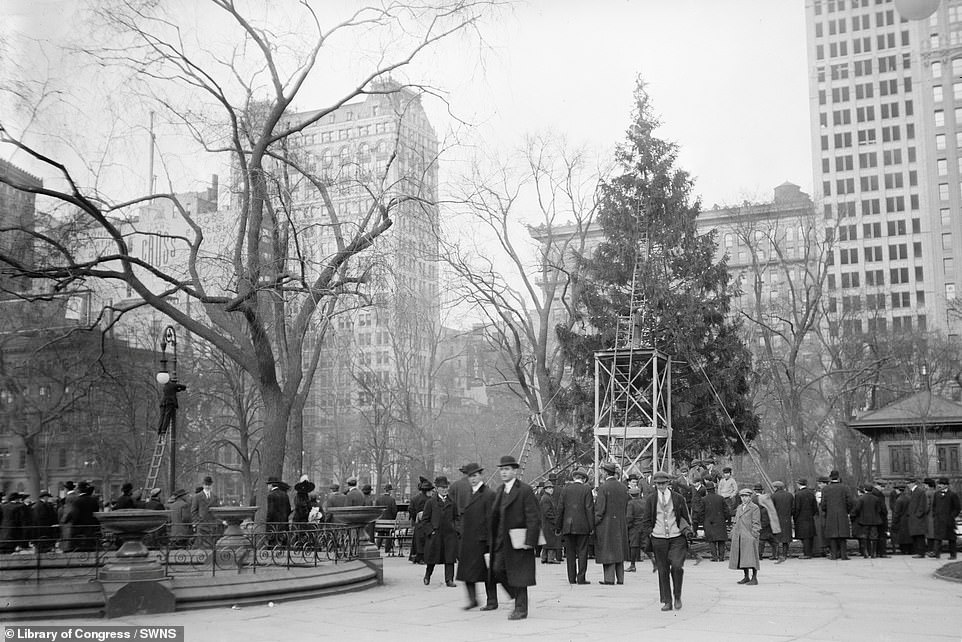 This series of fascinating vintage photographs show how New Yorkers prepared for Christmas over a hundred years ago. Pictured: A crowd gathers in Madison Square Park where, in 1912, it is reported the United States’ first public Christmas tree lighting ceremony took place in December of 1912 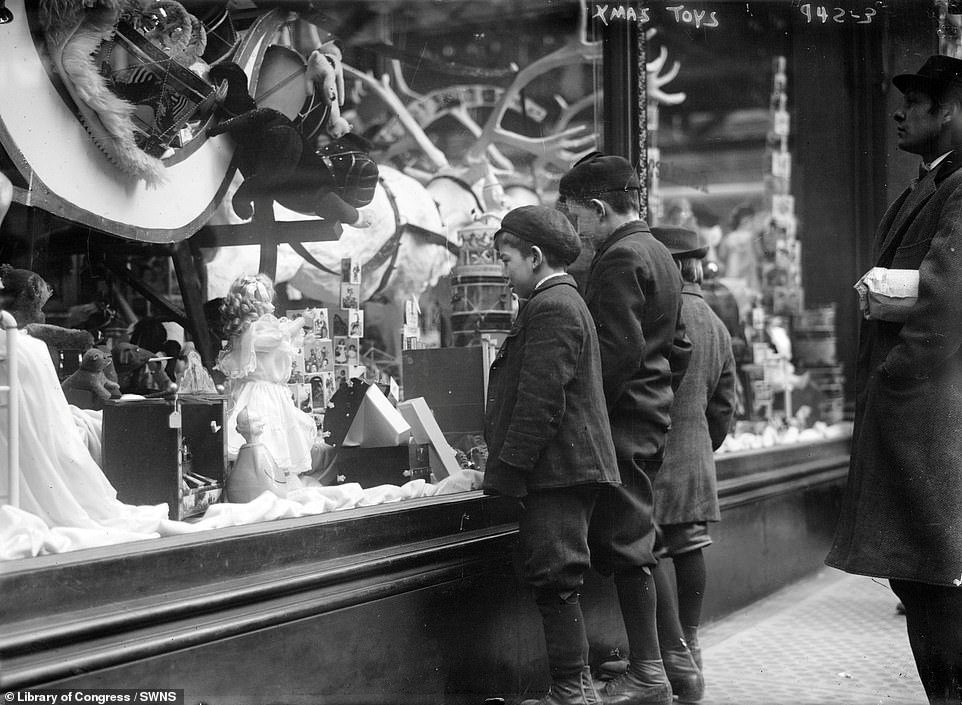 The pictures – taken between 1900 and 1915 – feature everyday scenes of people in New York during the festive season. Pictured: Boys wearing (at the time) fashionable knickerbockers, shorts and caps gaze at Christmas toys including cuddly animals and photo boxes in a shop window in 1910 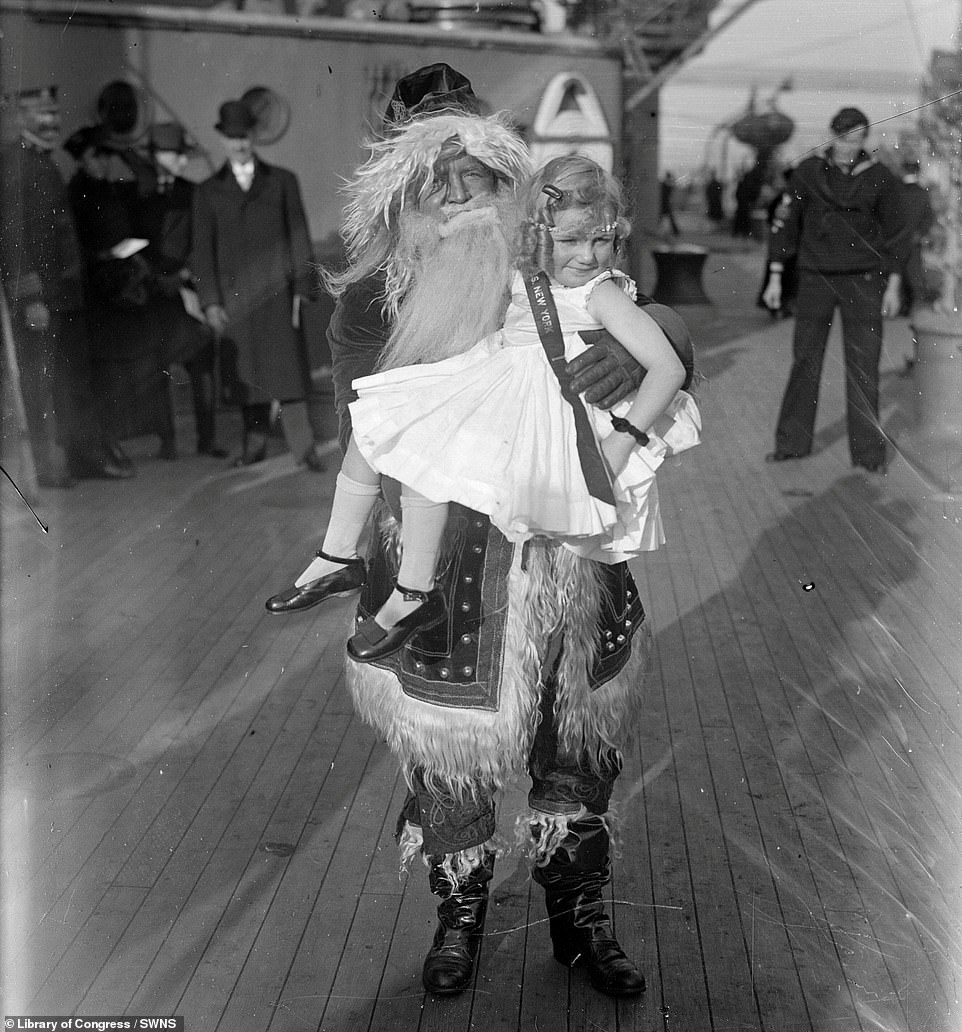 Pictured: Santa Claus poses for a photo with a young girl aboard the USS New York ship, circa 1915. The battleship they are standing on was built and commissioned shortly before the photo was taken. Having entered service the year before, the New York was sent to reinforce the British Grand Fleet in the North Sea near the end of World War I 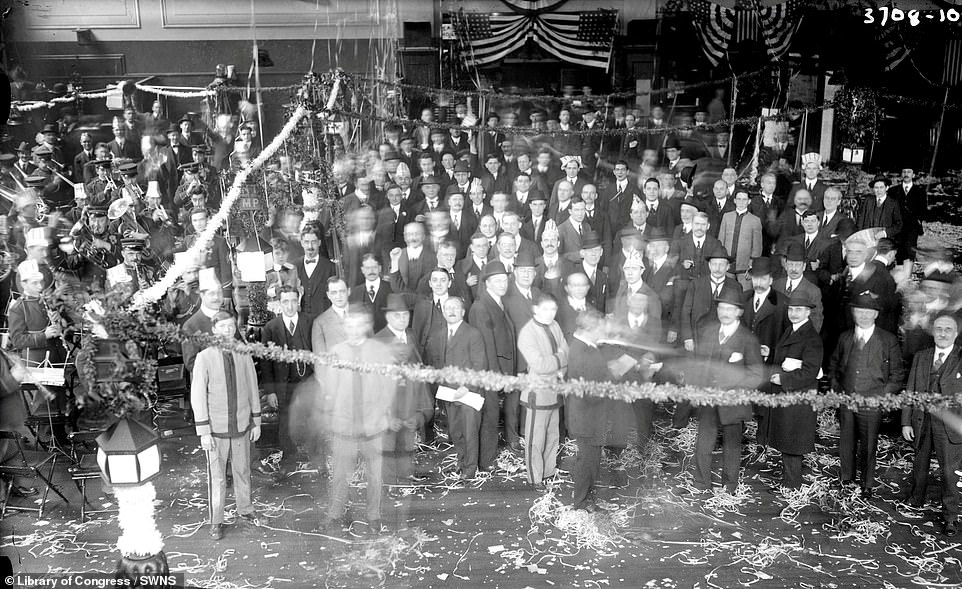 This photograph shows Christmas celebrations for employees at the Consolidated Stock Exchange in New York City. Ticker tape, which transmits stock price information, is seen littered on the floor below festive decorations. A large brass band can be seen playing to the left hand side of the frame. The Consolidated Exchange was a competitor the New York Stock Exchange during the early 20th century, but eventually ceased trading in 1926 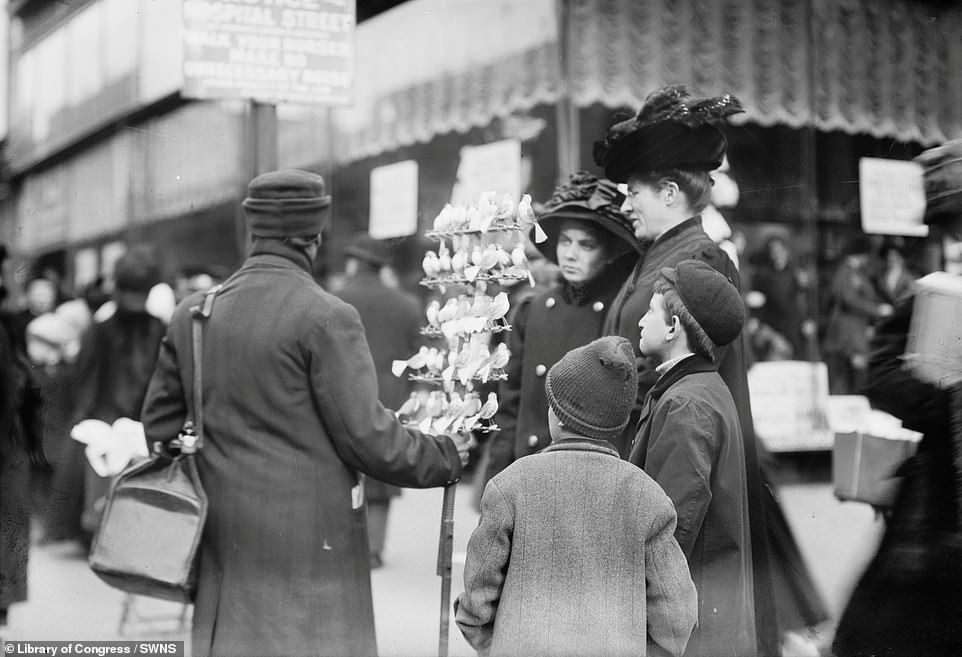 Peddlers have been a common sight on the street of New York City for around two centuries now. Although around just 4,000 licenses are currently granted now, street trade was much more common in the 19th and early 20th century, especially among immigrant communities where men and women would sell a whole range of items. Pictured: A Christmas peddler with small birds, circa 1900 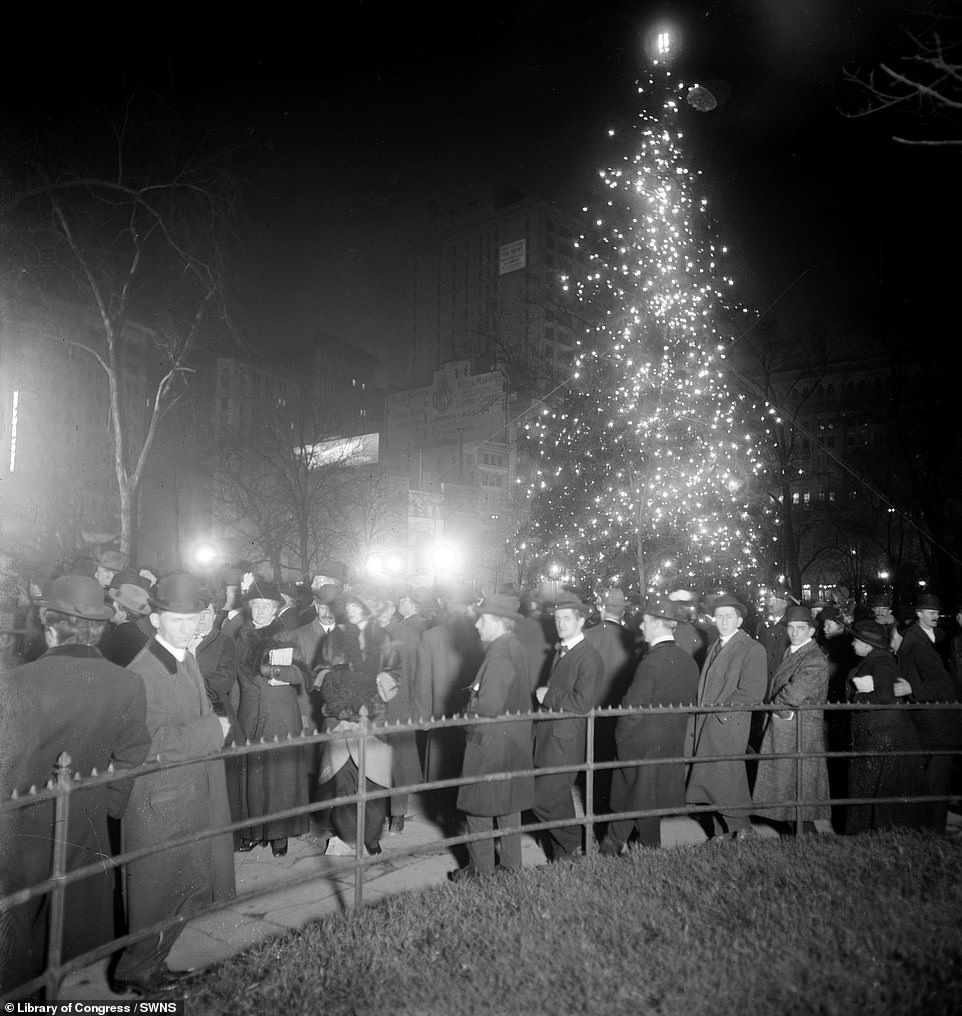 This 30-foot-tall Norwegian Spruce in Madison Square Park, lit with innovative electric twinkling lights, is said to have attracted some 25,000 visitors over the December holiday period in 1912. The tradition has continued to this day with a tree brought to the park from Dome’s Tree Farm in Bliss, New York 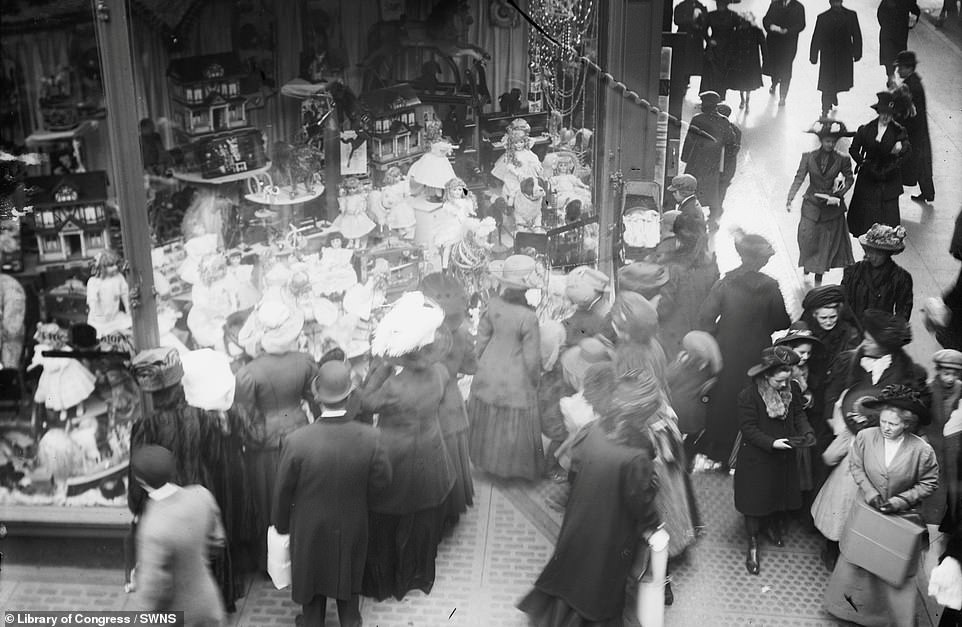 Even over 100 years ago, crowds of shoppers would flock to the main streets to buy Christmas presents in the run up to the holiday period. Christmas shoppers are seen here looking at a window display of dolls and miniature house around 1900. The city had already been home to department store for decades, with Arnold Constable, America’s first department store, opening on Pine St in 1825 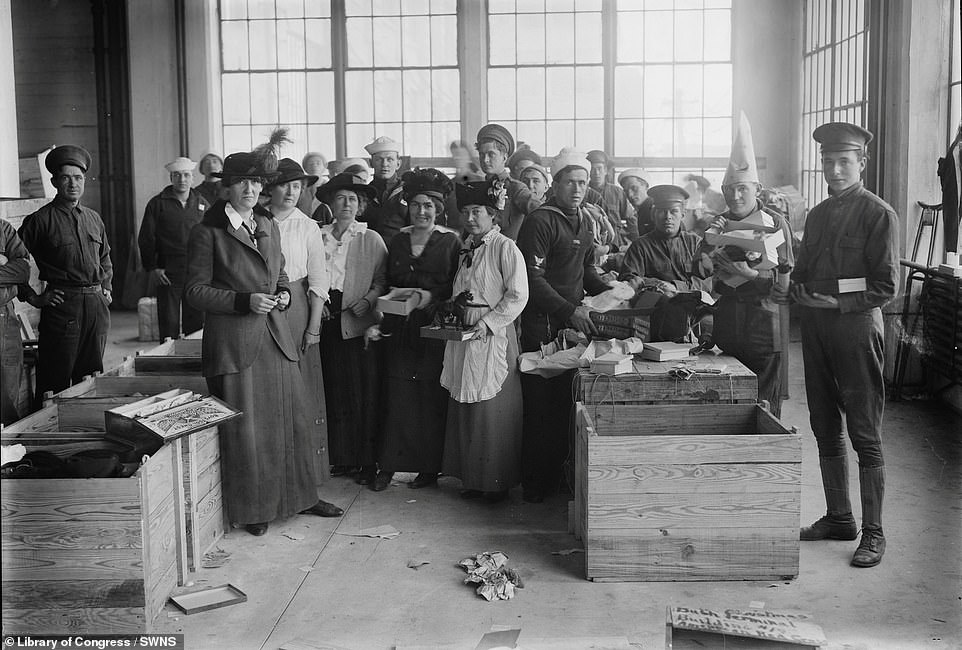 This heartwarming photograph shows women and military personnel packing Christmas gifts for the USS Jason, a cargo ship which sailed from New York on November 14, 1914 carrying about 6 million gifts for the children of Europe who were affected by World War I. The ship was later converted into a commercial bulk carrier and then scrapped in 1948 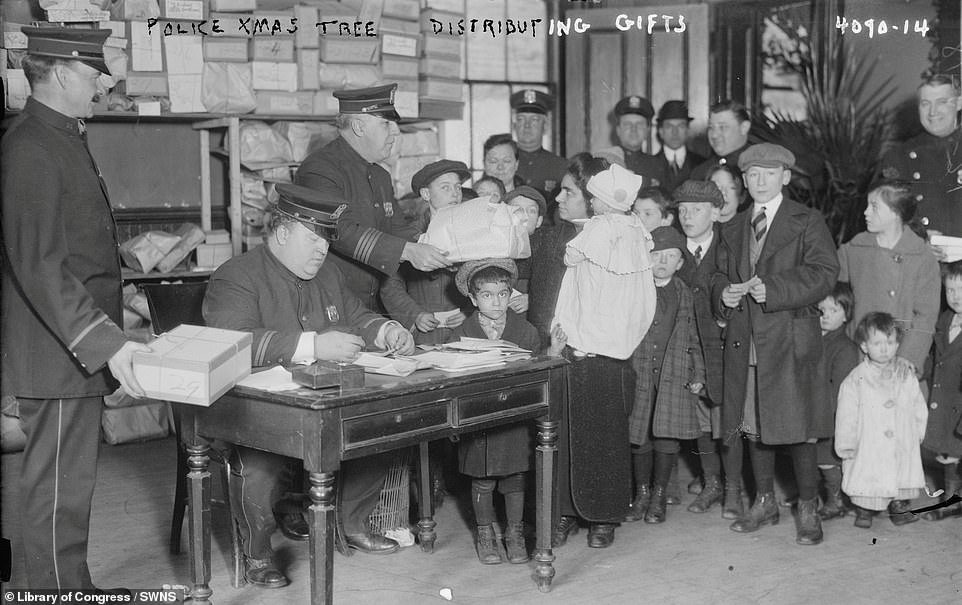 As has been a tradition since around 1916, this photo shows some of New York City’s finest handing out Christmas presents to children from disadvantaged families. NYPD officers have for over a century organised and even donated to a Police Christmas Tree Fund, mostly recently called ‘Operation Sleigh Ride’ that delivers presents to families across the five boroughs 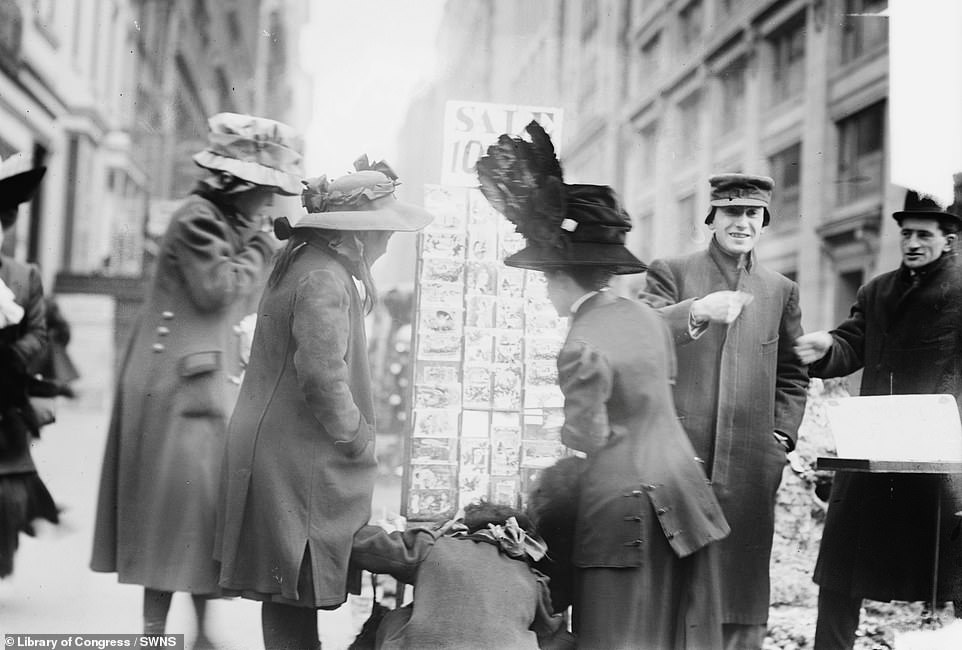 Pictured: Women browse through Christmas postcards that are for sale, circa 1900. The sign above the card display appears to show the greeting cards for sale at 10 cents apiece, which would be worth around $3.31 in today’s money taking into account inflation 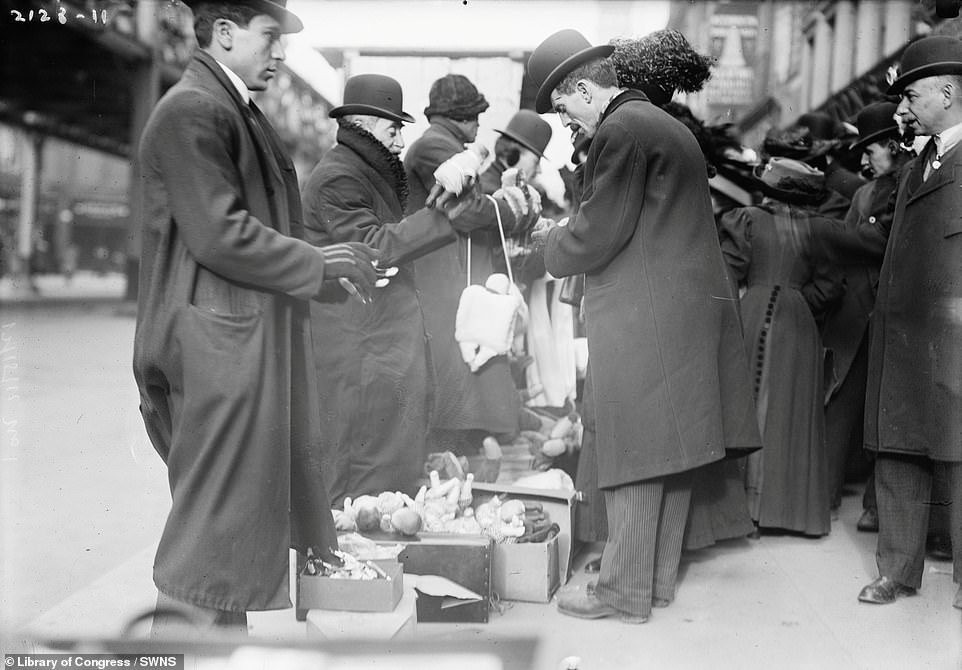 Pictured: Christmas peddlers with dolls and other items, circa 1900. The first peddler pushcarts appeared on Hester Street in the Lower East Side in 1886. It came at a time when the area was about to undergo massive change, when a wave of immigration brought more than 2.5 million Eastern European Jews to the United States 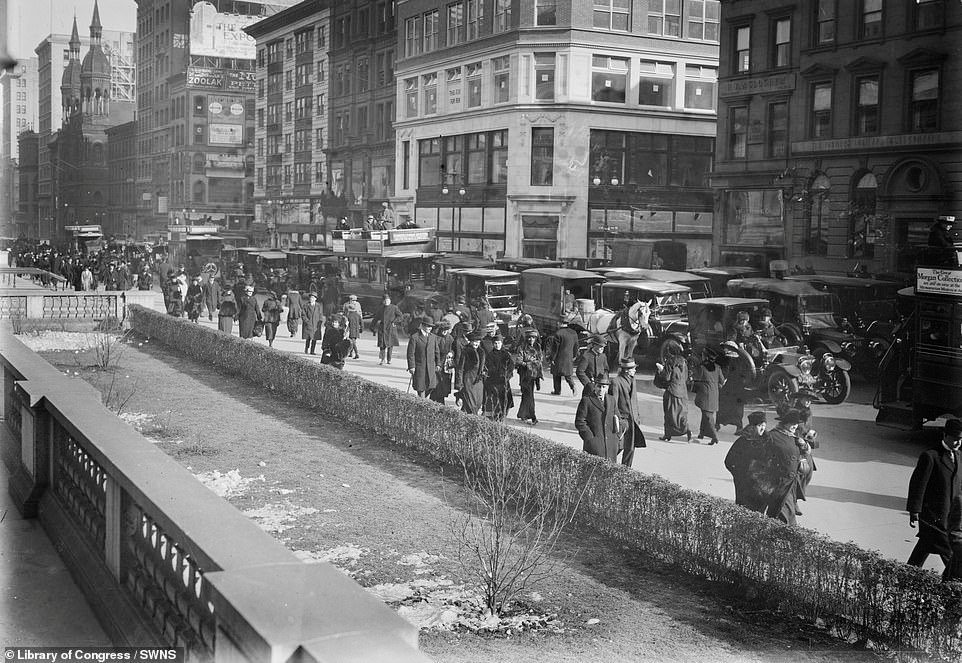 This photographs shows the view of a crowded Fifth Avenue at Christmas time in New York City. It was taken from the steps of the New York Public Library, looking north, in around 1910. Many of the cars pictured are Ford Model Ts, one of the only mass produced vehicles available at the time 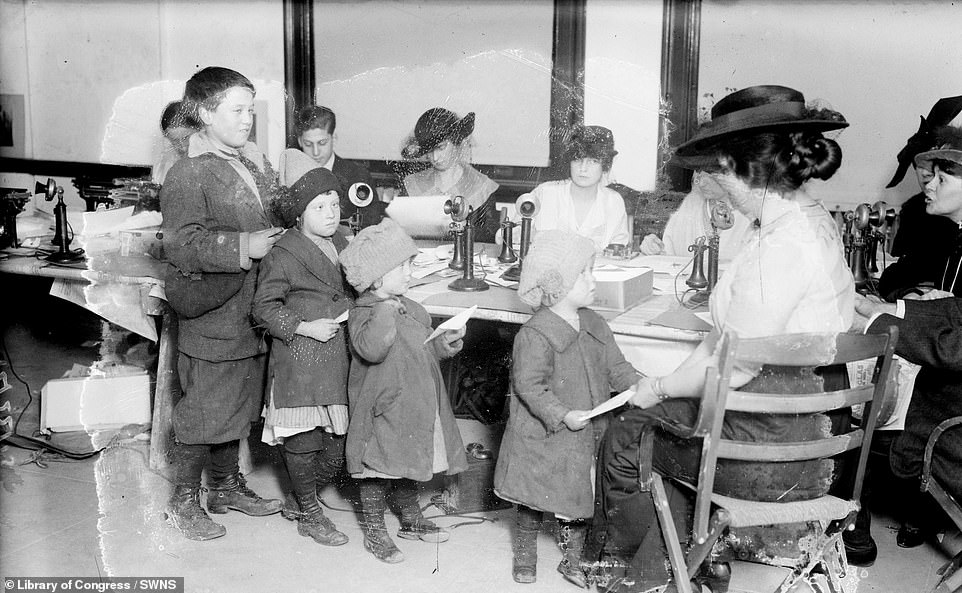 This picture is entitled ‘At Santa Claus Headquarters, NY’, dating to around 1910, and appears to show young children handing in their letters to be sent off to father Christmas. As far back as the 1870s, post offices have made reports of receiving letters addressed specifically to Santa Claus 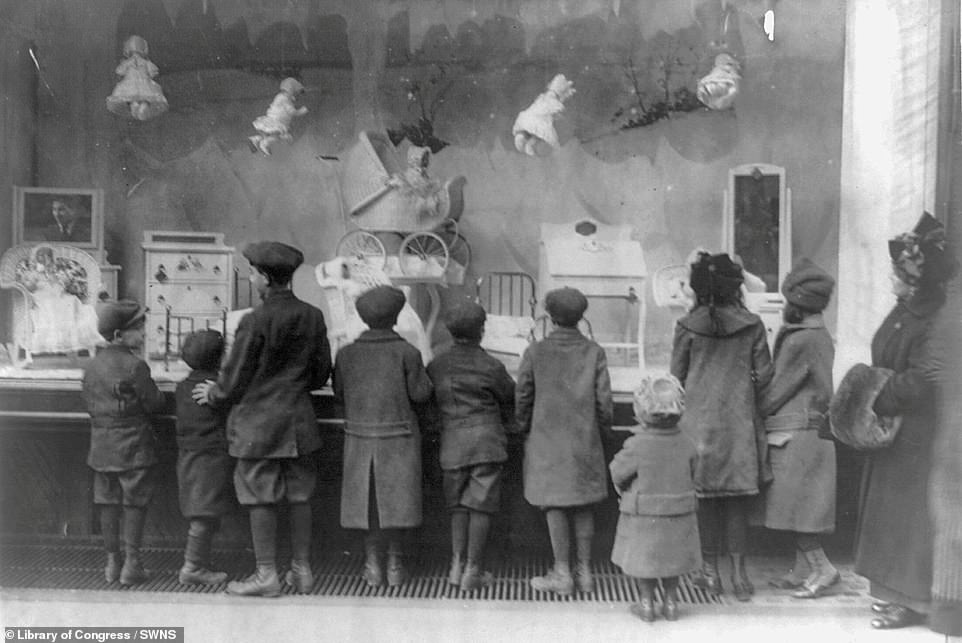 Pictured: Small children gazing at dolls, prams and bedroom furniture in a Macy’s Christmas shop window display in around 1908. The children are looking into a window of the department store’s flagship building on Herald Square, which had opened on the site just six years before. It’s 1.25 million square feet of retail space still makes it the largest department store in the United States 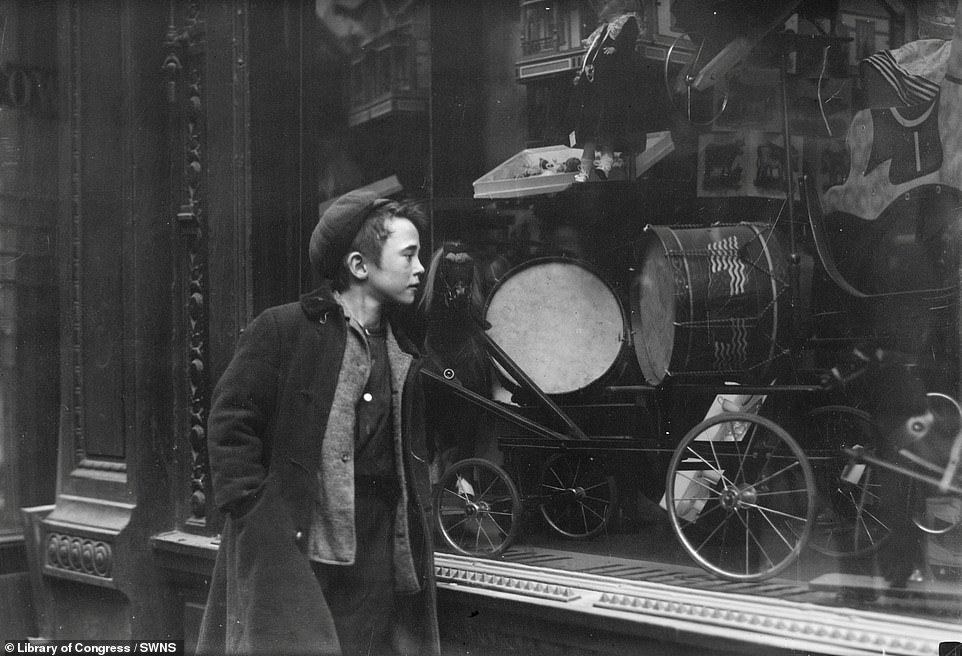 This photograph shows a young boy looking at Christmas toys including drums and bicycles in a shop window, circa 1900. Despite its affluence, many families were too poor to afford presents for their children, bringing home just enough money to survive. In 1918, it was reported that low-income families of four in the city spent an average of 45 per cent of their income on food 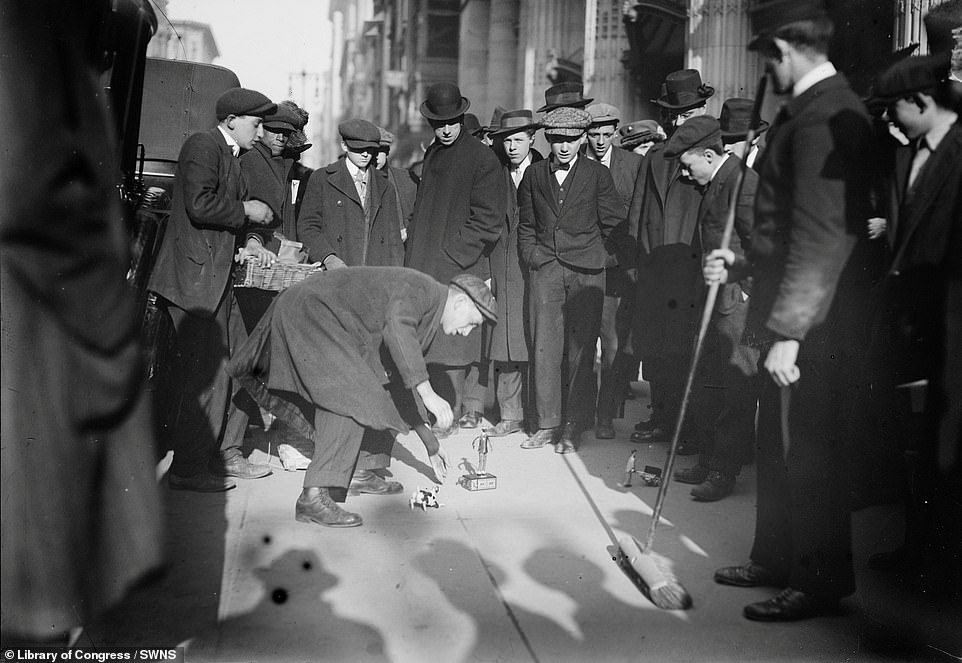 The city had for years been trying to bring in reforms to curb the spread of street traders, after shop owners complained they were blocking doorways. Pictured: A Christmas toy seller, circa 1910. S 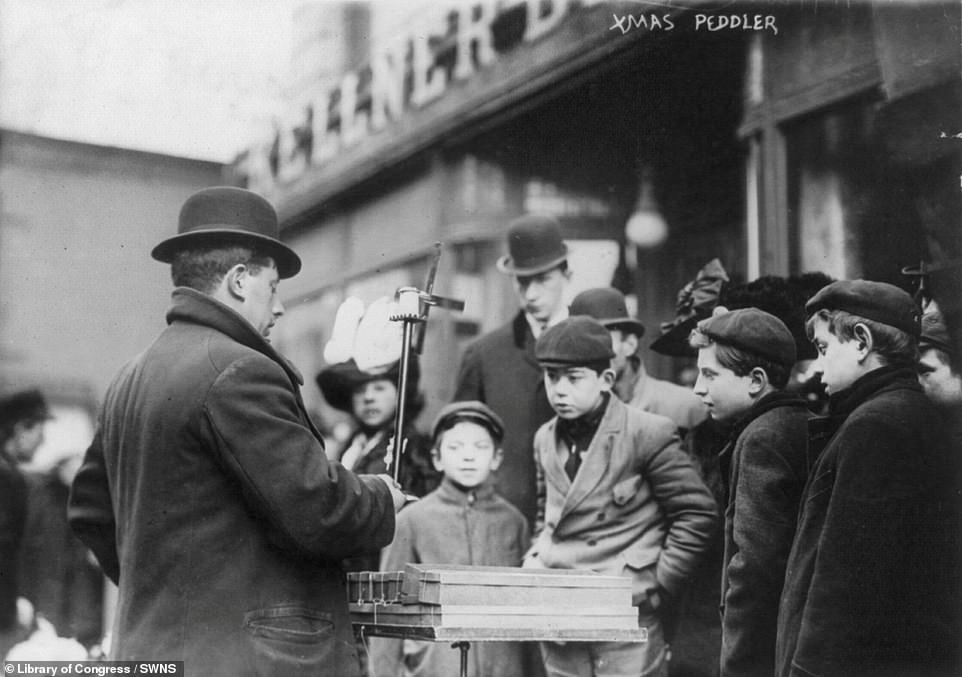 Pictured: A Christmas peddler seen on December 19, 1910. To many Americans, the pushcart markets were an eyesore and a nuisance. Americans viewed the ‘proper way’ to shop involving going into stores where the merchandise was neat and prices were clearly marked, pushcarts were an affront to those rules 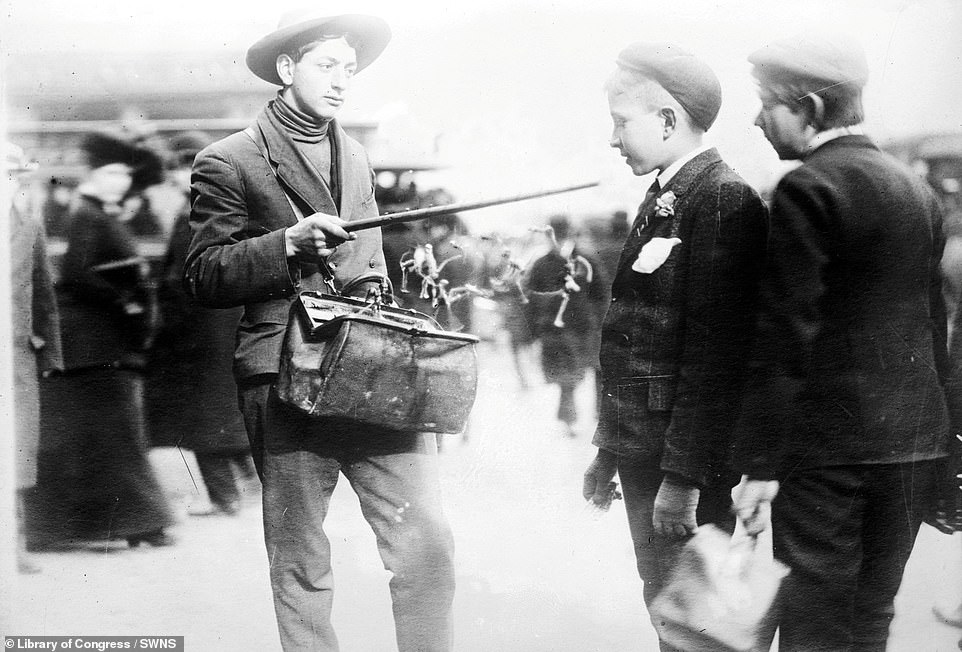