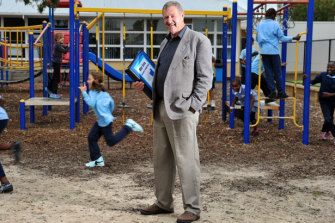 Dandenong North Primary School principal Kevin Mackay has had to deal with a persistent COVID-19 cluster in his school this term. Credit:Wayne Taylor

Parental anxiety about children and the virus is also running high, with some principals fending off requests to close their schools and revert to remote learning for the rest of the year, while others report above-average absentee rates as parents keep their children at home.

On Tuesday, schools made up 36 of the state’s 51 listed COVID-19 clusters. The list only includes outbreaks of 10 or more cases, except for those in aged-care homes. Schools in Bendigo, Bairnsdale and Nhill were among the worst hit.

And though closures were mostly limited to one day in length, principals said the disruption did not end when their school reopened.

With less than three weeks of the school year to go, Dandenong North Primary School principal Kevin Mackay said he would ordinarily be making plans for 2022 right now, such as transitioning next year’s intake of prep students.

But cases have been “bubbling away” at the school of about 750 students for weeks, requiring Mr Mackay and his leadership team to take on the role of contact tracers for the Department of Health, a role he describes as “very daunting”.

The school was directed to close on Friday so that all students and staff could be tested.

“The Department of Health was concerned that there had been a number of cases and that there were some asymptomatic students who weren’t being picked up, and that was why the caseload continued to bubble along,” Mr Mackay said.

The school emerged from its snap shutdown on Monday. But Mr Mackay estimated that 15 to 20 per cent of his students did not attend that day, either because they were isolating with COVID-19, because their parents kept them home, or because they could not yet confirm a negative PCR result.

Some children and their parents even had to be turned away at the school gate on Monday morning for this reason, he said.

“The disruption is there; I think there is almost a dread for most school principals of getting that call that you’ve ‘gone hot’; that you’ve got a positive case,” Mr Dalgliesh said.

Challenges include managing contact tracing for the Health Department and soothing the anxieties and frustrations of some parents, he said.

Holy Rosary Primary School, in the Bendigo suburb of White Hills, had 48 cases on Tuesday, the largest outbreak in Victoria.

It made its own decision to close on Monday due to the difficulty securing enough rapid antigen tests for all of its students, a spokesperson for Catholic Education Sandhurst said.

Classes resumed on Tuesday after the school was converted into a PCR testing hub on Monday so that the entire school cohort could be tested.

Other schools have faced lengthier shutdowns in recent days due to staff shortages.

Lucknow Primary School in Bairnsdale was forced to close for five consecutive days last week and reinstate remote learning for its 550 students.

Confusion reigned as all staff and students were directed by the Gippsland Regional Public Health Unit on November 21 to get tested and quarantine for seven days.

Lucknow’s leadership team apologised to parents and carers for the “conflicting advice about testing and isolating” some families received from the Department of Health COVID hotline.

“We would like to reassure parents that the decision to close the school was not a school-based decision,” staff wrote.

It announced its reopening on Monday but noted that “not all students will be able to return”.

A spokeswoman for the Andrews government said the vast majority of schools no longer closed when they became an exposure site, noting 93 per cent of school sites that have been exposed to COVID-19 in the past two weeks have been cleaned and primary close contacts identified before students returned the next day.

“Of the few schools that do close, the vast majority are for a 24-hour period where more complex contact identification is required, often because there is more than one case associated with a school,” the spokeswoman said.

In the past two weeks, just 1.6 per cent of school exposures have closed for more than one day, the government data shows.

Lyle Mitchell Corbine Jr. on ‘Wild Indian’ and How the Film Changed His Life (Guest Column)