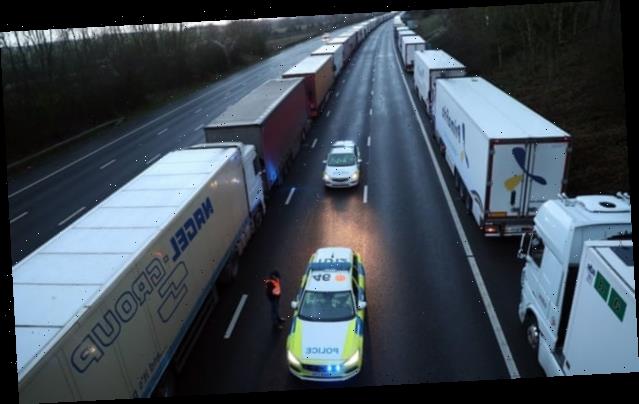 France expects to announce a limited reopening of its borders to UK traffic, as the British government said it was drawing up plans to test all lorry drivers taking goods across the Channel for Covid.

“A solution is being worked on and will be announced during the course of the day,” a French government source said on Tuesday. “The 48-hour suspension of traffic from the UK was “always an emergency measure, to allow us to find practical solutions and to consult with our European partners.”

The British home secretary, Priti Patel, said the government was talking to the French authorities about testing all hauliers leaving Britain, as she confirmed more than 1,500 lorries were stuck in Kent on Tuesday morning.

The queues have formed since France imposed a ban on any accompanied freight or cargo entering the country from Britain, triggering government crisis plans at Dover and other major pinch points.

Patel told BBC Breakfast: “Testing of some sort is part of the discussions that the transport secretary is having with his counterpart in France right now.

“Getting those tests up and running can happen pretty quickly, but in terms of the details of that, that is something both the transport secretary and his counterpart will be discussing right now so I don’t want to speculate in terms of the nature of the testing and how soon that can be up and running,” she said.

Patel was questioned about the claim of the transport secretary, Grant Shapps, in a Downing Street press conference on Monday night that there were only about 170 lorries waiting to cross the Channel, only to be later contradicted by Highways England, which said there were about 900.

She said the number of lorries would “fluctuate” but that on Tuesday morning there were 650 on the M20 and a further 873 at Manston airfield, which is being used as a contraflow site to ease the tailbacks.

She added: “So for example, there would have been many hauliers yesterday dropping off their goods in other parts of the country and then going back down to Dover. Of course the No 1 message has been to avoid Dover.”

Patel said the UK and French authorities were working towards a resolution to unblock the ports and that Shapps may give a further update later on Tuesday.

There are concerns about the welfare of lorry drivers waiting to cross the Channel, with one trade body saying they had only been given a single cereal bar each despite being stuck in their cabs for more than 24 hours.

Rod McKenzie, the managing director of the Road Haulage Association, told BBC Breakfast: “Clearly those drivers have spent a second night parked up somewhere, possibly on a motorway, possibly somewhere else, trying to get across the Channel, and many of them are European drivers trying to get home for Christmas, and their morale is very poor.

“Yesterday, Kent county council offered each of them one cereal bar, which is a pretty poor effort, I think, in terms of maintaining their morale, and their spirits.”

McKenzie said toilet facilities were also a “big issue”, with concerns over health and cleanliness. “We are not treating them well as a country, we are not treating lorry drivers well in these very difficult conditions that they are in at the moment.”