Large sheets of steel have twice come loose and dangled from one of the tallest buildings outside Melbourne’s CBD causing road closures in the streets below as emergency workers rushed to fix the problem.

The steel shutters provide privacy to balconies of the upmarket The Chen hotel, which is part of Box Hill’s 115-metre tall Whitehorse Towers. 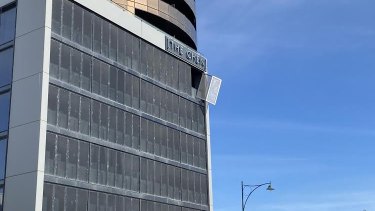 A large sheet of metal that came loose on The Chen, an Art Series Hotel within the Whitehorse Towers in Box Hill on December 30, 2020.

On June 10, members of the public alerted emergency services that a shutter had come loose from the building after a night of severe weather.

A spokesman for Victoria’s State Emergency Service said their local Whitehorse unit got “two calls on the morning of June 10 to attend Whitehorse Towers in Box Hill with reports of loose debris posing a risk to community”. 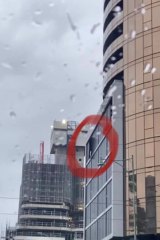 “On arrival, our volunteer crew observed a steel shutter attached to a balcony on the sixth floor of the building had come loose and was hanging.”

The SES spokesman said the road under the tower – Nelson Road – was closed and the SES crew worked with the building manager to secure the shutter. It was removed once the winds eased.

A police spokesman confirmed officers helped to secure the area.

The SES spokesman said a crew was sent to a similar job on December 30 last year.

Photos supplied to The Age and Sydney Morning Herald from December show another steel shutter dangling from another balcony on the same floor of the hotel. It was a clear day when the photos were taken but Bureau of Meteorology data shows there were light winds that day and during previous days.

On that occasion, SES crew and police cordoned off the corner of Whitehorse and Nelson roads.

There are 20 balconies on the Nelson Road side of the building, each covered by the same steel shutters.

Manningham Council ordered the the building’s owners to secure the shutters by June 18 but has since given them an extension to get a technical evaluation.

The council did not say how long the owners had been given, but said the shutters had been wired shut in the meantime.

The $330 million twin towers – one 36 storeys high and the other 26 – were the tallest outside the CBD until the nearby 122-metre Sky One tower eclipsed it by seven metres.

Whitehorse councillor Amanda McNeill called the situation dangerous. “You just can’t have bits flopping off buildings and onto the road below, that has to be rectified,” Cr McNeill said.

Local residents on social media described the towers as an “eyesore” or said they hated it, while another said she no longer walked under it due to fears pieces could fall off. 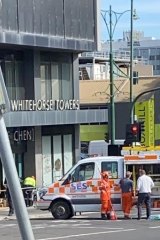 SES and police secure the area below the Whitehorse Towers on December 30.

Accor referred The Age and Sydney Morning Herald to the Melbourne Owners Corporation Services, which did not respond to questions by deadline. The council did not clarify whether the order was sent to Accor or the body corporate.

Designed by architects Peddle Thorpe and built by MAXCON, the towers contain 516 apartments, retail and commercial space and the luxury 100-room hotel, The Chen, which is named after Chinese Australian artist Zhong Chen. The rooms at The Chen can also be rented on a long-term basis.

A spokesman for the Deague Group said developers were never responsible for such faults and, on this occasion, tenants were to blame.

“This is not a design or quality or construction issue, this has occurred because the metal screen doors have not have not been closed on windy days and as a result of continual flapping, they have dislodged,” he said.

“When builders or developers want to defend themselves, they always [blame] user error,” he said.

“If a window opening causes a structure to become dangerous to the public, then that’s a design error, and it’s a construction error, it’s not [a] user error.”

The Deague Group was in court in 2018 after windows reportedly “exploded” in the 85 metre apartment tower Vue in Adelaide.

Covid vaccine: Millions to receive third jab – when will I be called up to receive it?
Recent Posts